I rode an electric motorcycle for the first time. Here’s what I learned. 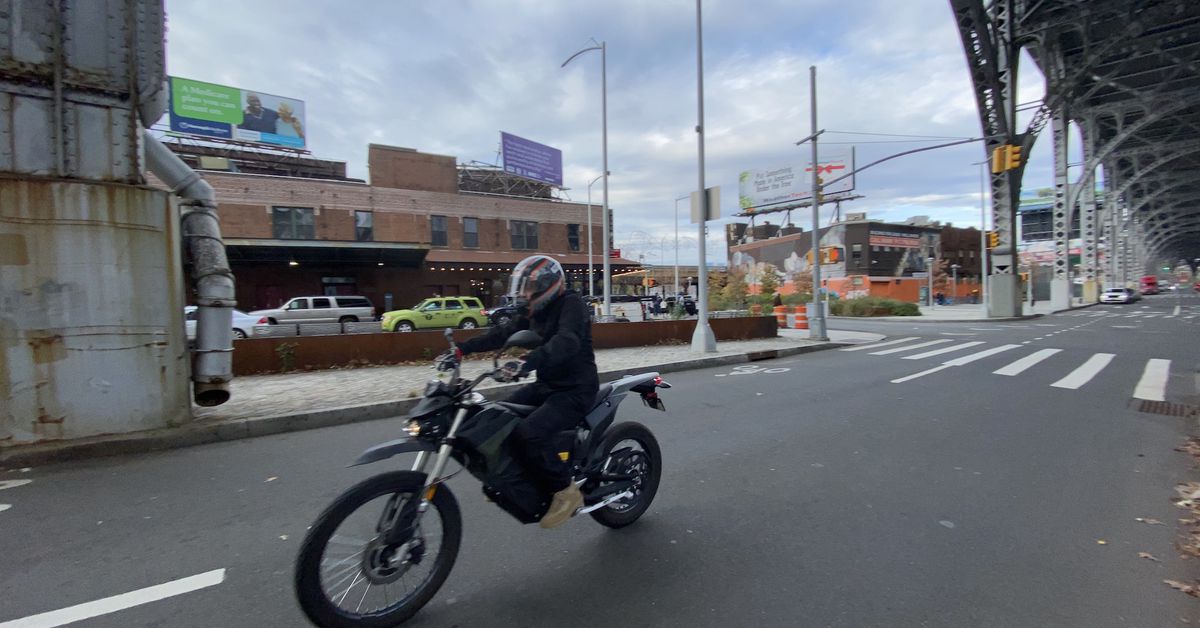 The Zero FX is a dual-sport motorcycle that’s well-suited for a city. (Roselle Chen /)

The Zero FX electric motorcycle is an exciting machine with a top speed of 85 miles per hour and enough acceleration to frighten yourself if you twist aggressively enough on the throttle.

But as a relative beginner to the motorcycle world, I didn’t ride it anywhere near its maximum speed when I had the chance to check it out for about a week in November. I’d never driven an electric motorcycle before, and a sense of curiosity coupled with pandemic-induced boredom urged me to try it out for rides in Manhattan (while another, very present feeling of caution urged me to do so carefully).

I’m not the only one hopping on a two-wheeler these days: Sales of new motorcycles and scooters are up by about 10 percent in the third quarter of this year, according to the Motorcycle Industry Council. That bump is a smaller version of a large surge in bicycle sales.

If you’re curious about climbing onto one—whether as an alternative to public transportation during COVID, for fun, or some combination of those reasons and others—here’s what I learned as a beginner on a fancy new electric motorcycle.

A standard-issue gas-powered motorcycle requires that its rider shift gears by pulling in the clutch with your left hand and changing gears with your left foot.

But an electric motorcycle strips away that requirement. Because you don’t need to shift, operating it is a cognitively easier task for a beginner like me. The Zero FX I rode, like other electric bikes, is operated simply by rolling on the throttle in your right hand. The rear and front brake controls are in their usual spots—engaged using your right foot, and right hand, respectively.

Because you don’t need to shift, accelerating is an easy, linear experience—twist that throttle and zoom forward. That allows you to zip away from any cars that you think might be encroaching into your space, but it also means that you can scare yourself if you twist it too much. Also, it’s very quiet—it makes a whirring sound when you drive it, and when you’re sitting still with it turned on, it’s completely silent. It’s wise to stay ready with the horn to warn others that you’re there. The common motorcyclist phrase “loud pipes save lives” doesn’t apply here.

The FX is a dual-sport bike: It’s great for both the paved streets of New York City and for venturing on rougher gravel roads as well. This type of ride is also on the rise: The Motorcycle Industry Council reports that sales of dual-sports were up nearly 21 percent from January to June of this year. A plush suspension and all-terrain tires help with its versatility, and I found that it absorbed the urban bumps I encountered well. And the torque, which helps power its strong acceleration, clocks in at 78 ft-lb: that’s a lot.

The bike was taller than I initially felt comfortable with—the seat height is 34.7 inches—and when I was on it, I could only touch the ground with my toes; its height made swinging a leg over it harder than I expected, and backing it into a parking spot was also a little challenging. But I found that my initial intimidation with the machine faded as I rode it around my neighborhood, and the fact that it felt maneuverable and easy to swerve around with helped me become more comfortable on it.

If you’re thinking of buying an electric motorcycle, here’s what to keep in mind: You’re obviously going to need to charge it. If you have a garage or other easy way to park and plug it in, that’s a simple problem to solve. If you live in a city—and the Zero FX felt great for cruising around one—then you’re going to need to think carefully. I live in an apartment building and parked the bike on the street, so had no way to recharge, meaning that I had to rely on what was already in the battery for the time I borrowed it. While the model I was using has an integrated battery, the same bike comes with a modular configuration. That means you can remove the battery to bring it inside and then charge it—but it weighs 42 pounds. That’s rough if you live in a walk-up.

Bottom line if you’re thinking about an electric motorcycle: It’s a great option for a beginner, because you don’t need to worry about shifting, and it can be a great way to commute or run errands around the city or suburbs, too. The range on the model I had was 91 miles, making short trips easily accomplished for days on end between charges, but of course you’re not going to easily take it on a road trip. Plus, the starting price is steep: $11,295 for the non-modular version. And beyond the Zero offerings, another famous electric motorcycle comes from a classic brand: Harley Davidson’s LiveWire, which begins as $29,799.

Keep in mind, though, that starter internal-combustion motorcycles are so much cheaper—they might cost you somewhere around $4,000 (like for a Honda Monkey) or $4,600 (for a Honda Rebel) or more, depending on what you want.

Of course, a dual-sport electric motorcycle is just one option out of a myriad of two-wheelers out there, and they come in different types: The basic categories include standard motorcycles, sport bikes, dirt bikes, and others.

Andria Yu, a spokesperson for motorcycles.org, has some simple advice for anyone starting out. Visit multiple dealers, she says, “and sit on a bunch of bikes.” The aim is to feel comfortable on it. For example, a Suzuki TU250X has a seat height that’s more than four inches shorter than the Zero I rode, and is thus easier to manage when standing still, and its base MSRP is much cheaper than the Zero: $4,649. Of course, you’ll also need to consider other factors, such as what you need it for, whether that be for commuting, longer trips, or something else.

Riders should follow the ATGATT protocol when on the bike: Wear “all the gear, all the time.” (Roselle Chen/)

“Unlike cars, motorcycles are very individualistic,” Yu says. Besides the issues of ergonomics, what you need it for, and the relatively new electric-vs-gasoline question, there’s also a question of style and even the culture of where you live. That individualistic nature is “kinda the joy of it,” she says. That differentiates buying a bike from purchasing a simple car like a Toyota Corolla or Subaru Forester—you’re thinking more about comfort, capability, and image than you do with a four-wheel vehicle.

Last but definitely not least, she recommends taking a safety class, which can pave the way for getting your license. A good place to look for those is through the Motorcycle Safety Foundation or the website for your state DMV. I took a basic class twice, so had plenty of time to learn in the relative safety of a small parking lot in Queens, New York. Those experiences helped me feel comfortable with the basics of operating a standard motorcycle like a Suzuki, but also jumping onto that zippy Zero when I had the chance.

Last month I had the chance to check out an electric motorcycle from Zero. Here’s a look at what it’s like to cruise around the block on it. (Note! Both the video and audio have been sped up more than twice as fast.) pic.twitter.com/W7mAYDdslR