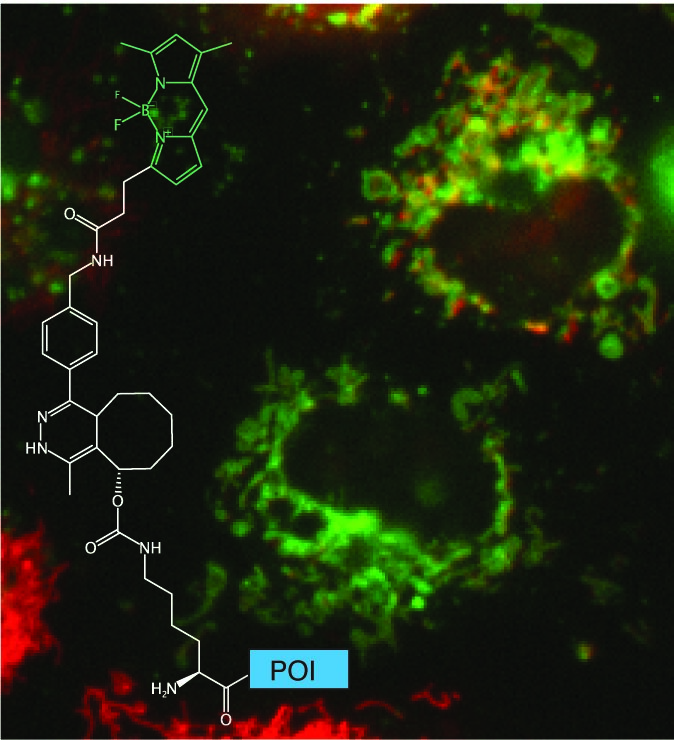 SciLifeLab Fellow Simon Elsässer laboratory at Karolinska Institutet reports a method, which allows fluorescent tagging of proteins with the small perturbation—a single amino acid—added genetically on either end of a (micro)protein of interest. The method is termed Single-residue Terminal Labeling (STELLA).

Thirty years ago, the cloning of the green fluorescent protein GFP, together with genetic engineering tools, revolutionized the field by enabling researchers to fuse a fluorescent ‘beacon’ to any protein of interest so that it can be directly observed in living cells using fluorescence microscopy. Today’s microscopes achieve live imaging, at nanometer resolution, in multicolor, allowing researchers to resolve even the smallest subcellular structures. Fluorescent proteins however have a limitation: the size of the fluorescent tag is often equivalent to the size of a typical folded protein, thus adding a considerable molecular ‘cargo’ to the protein under study and potentially impacting its function. This can become a particular obstacle for the study of microproteins, a newly appreciated class of proteins that are much smaller than average.

In a study led by a postdoctoral researcher Lorenzo Lafranchi from Simon Elsässer laboratory at Karolinska Institutet SciLifeLab, a method reported, which allows fluorescent tagging of proteins with the small perturbation—a single amino acid—added genetically on either end of a (micro)protein of interest. The method is termed Single-residue Terminal Labeling, STELLA. It is based on a synthetic building block (a non-canonical “designer” amino acid, rather than one of the 21 canonical ones) that is incorporated together with a larger tag using a technique termed genetic code expansion. The tag is then swiftly removed by the cell, leaving a single terminal designer amino acid on the protein of interest. The designer amino acid introduces a chemical group into the protein that subsequently allows conjugation with a small organic fluorescent dye, lighting up the protein of interest inside of the living cell. The advantage over existing labeling techniques relying on the expansion of the genetic code, and STELLA can be used to label the termini of any proteins.

The study, published in the Journal of the American Chemical Society, demonstrates the utility of STELLA in fluorescent labeling a variety of human proteins and microproteins, localized to different subcellular compartments and organelles. Beyond cellular proteins, the team was also able to label and localize a number of elusive polypeptides produced by the SARS-CoV2 coronavirus causing Covid-19.