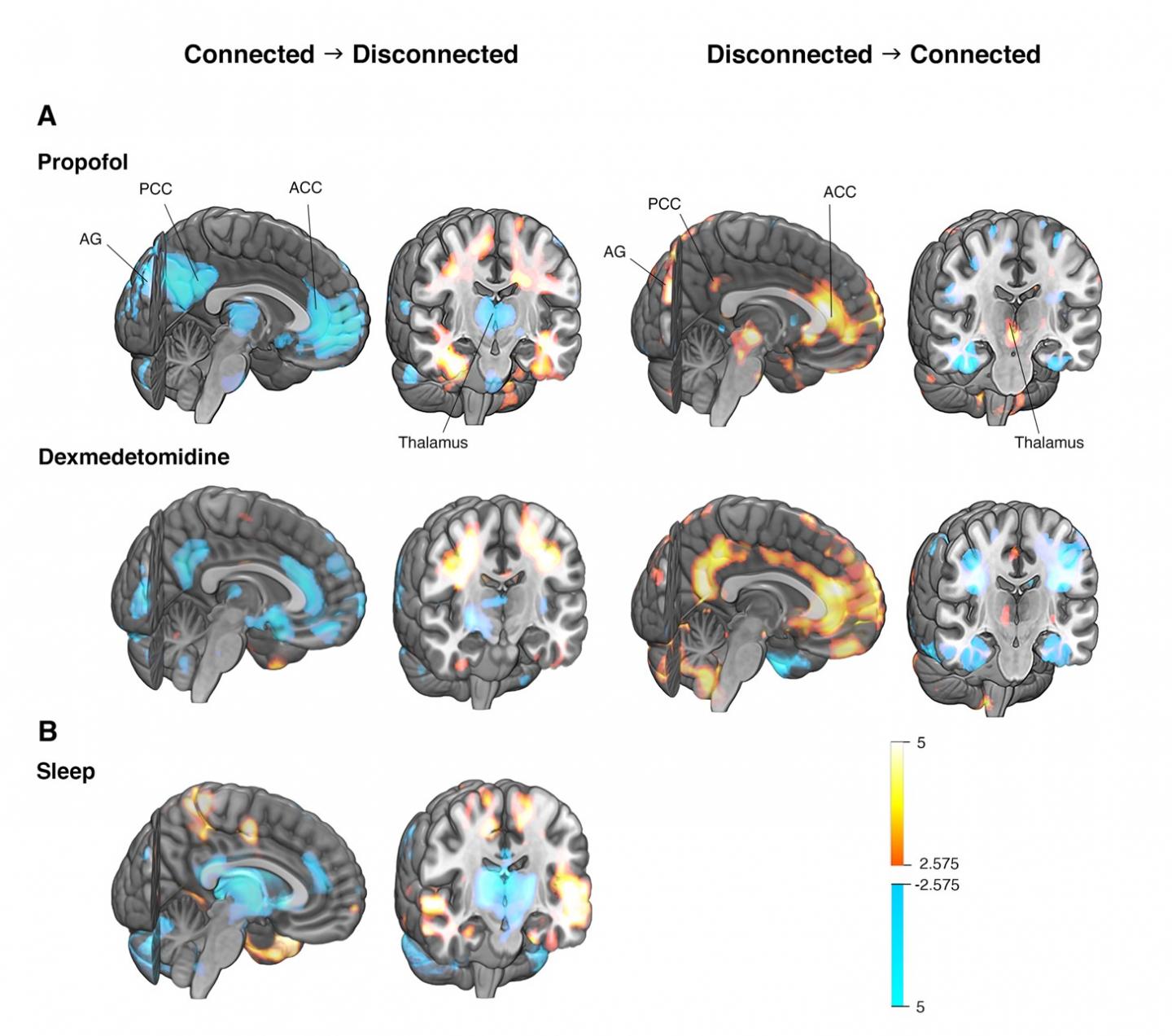 What happens in the brain when our conscious awareness fades during general anesthesia and normal sleep? Finnish scientists studied this question with novel experimental designs and functional brain imaging. They succeeded in separating the specific changes related to consciousness from the more widespread overall effects, and discovered that the effects of anesthesia and sleep on brain activity were surprisingly similar. These novel findings point to a common central core brain network fundamental for human consciousness.

“One major challenge has been to design a set-up, where brain data in different states differ only in respect to consciousness. Our study overcomes many previous confounders, and for the first time, reveals the neural mechanisms underlying connected consciousness,” says Harry Scheinin, Docent of Pharmacology, Anesthesiologist, and the Principal Investigator of the study from the University of Turku, Finland.

A new and innovative experimental set-up

Brain activity was measured with positron emission tomography (PET) imaging during different states of consciousness in two separate experiments in the same group of healthy subjects. Measurements were made during wakefulness, escalating and constant levels of two anesthetic agents, and during sleep-deprived wakefulness and Non-Rapid Eye Movement (NREM) sleep.

In the first experiment, the subjects were randomly allocated to receive either propofol or dexmedetomidine (two anesthetic agents with different molecular mechanisms of action) at stepwise increments until the subjects no longer responded. In the sleep study, they were allowed to fall asleep naturally. In both experiments, the subjects were roused to achieve rapid recovery to a responsive state, followed by immediate and detailed interviews of subjective experiences from the preceding unresponsive period. Unresponsive anesthetic states and verified NREM sleep stages, where a subsequent report of mental content included no signs of awareness of the surrounding world, indicated a disconnected state in the study participants. Importantly, the drug dosing in the first experiment was not changed before or during the shift in the behavioral state of the subjects.

“This unique experimental design was the key idea of our study and enabled us to distinguish the changes that were specific to the state of consciousness from the overall effects of anesthesia,” explains Annalotta Scheinin, Anesthesiologist, Doctoral Candidate and the first author of the paper.

When PET images of responsive and connected brains were compared with those of unresponsive and disconnected, the scientists found that activity of the thalamus, cingulate cortices and angular gyri were affected independently of the used anesthetic agent, drug concentration and direction of change in the state of consciousness (see figure). Strikingly analogous findings were obtained when physiological sleep was compared with sleep-deprived wakefulness. Brain activity changes were much more extensive when the disconnected states were compared with a fully awake state. State-specific findings were thus distinct and separable from the overall effects of drug-induced anesthesia and natural sleep, which included widespread suppression of brain activity across cortical areas.

These findings identify a central core brain network that is fundamental for human consciousness.

“General anesthesia seems to resemble normal sleep more than has traditionally been thought. This interpretation is, however, well in line with our recent electrophysiological findings in another anesthesia study,” says Harry Scheinin.

Interestingly, unresponsiveness rarely denoted unconsciousness (i.e., total absence of subjective experiences), as most participants reported internally generated experiences, such as dreams, in the interviews. This is not an entirely new finding as dreams are commonly reported by patients after general anesthesia.

“However, because of the minimal delay between the awakenings and the interviews, the current results add significantly to our understanding of the nature of the anesthetic state. Against a common belief, full loss of consciousness is not needed for successful general anesthesia, as it is sufficient to just disconnect the patient’s experiences from what is going on in the operating room,” explains Annalotta Scheinin.

The new study sheds light on the fundamental nature of human consciousness and brings new information on brain functions in intermediate states between wakefulness and complete unconsciousness. These findings may also challenge our current understanding of the essence of general anesthesia.

The experiments were carried out at Turku PET Centre as a joint effort of the research groups of Harry Scheinin studying anesthesia mechanisms, and Professor of Psychology Antti Revonsuo studying human consciousness and the brain from the point of view of philosophy and psychology, in collaboration with Professor Michael Alkire from the University of California, Irvine, USA. Turku PET Centre is a Finnish National Research Institute established by University of Turku, Åbo Akademi University and Turku University Hospital. The study was funded by the Academy of Finland and the Jane and Aatos Erkko Foundation.