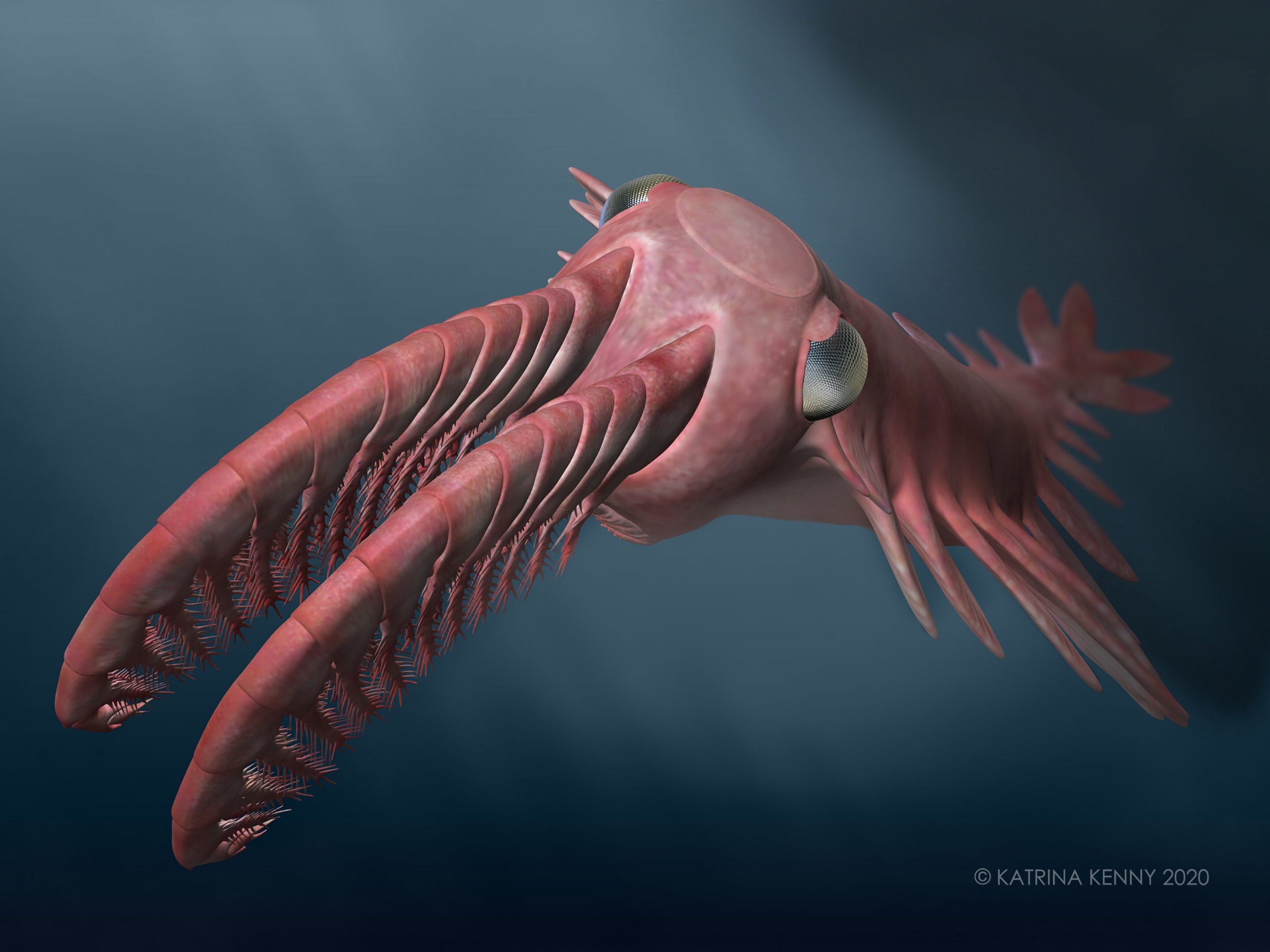 The international study, led by Professor John Paterson from the University of New England’s Palaeoscience Research Center, in collaboration with the University of Adelaide, the South Australian Museum and The Natural History Museum (UK), found that radiodonts developed sophisticated eyes over 500 million years ago, with some adapted to the dim light of deep water.

“Our study provides critical new information about the evolution of the earliest marine animal ecosystems,” Professor Paterson said. “In particular, it supports the idea that vision played a crucial role during the Cambrian Explosion, a pivotal phase in history when most major animal groups first appeared during a rapid burst of evolution over half a billion years ago.”

Radiodonts, meaning “radiating teeth”, are a group of arthropods that dominated the oceans around 500 million years ago. The many species share a similar body layout comprising of a head with a pair of large, segmented appendages for capturing prey, a circular mouth with serrated teeth, and a squid-like body. It now seems likely that some lived at depths down to 1000 meters and had developed large, complex eyes to compensate for the lack of light in this extreme environment.

“When complex visual systems arose, animals could better sense their surroundings,” Professor Paterson explained. “That may have fuelled an evolutionary arms race between predators and prey. Once established, vision became a driving force in evolution and helped shape the biodiversity and ecological interactions we see today.”

Some of the first radiodont fossils discovered over a century ago were isolated body parts, and initial attempts at reconstructions resulted in “Frankenstein’s monsters”.

But over the past few decades many new discoveries—including whole radiodont bodies—have given a clearer picture of their anatomy, diversity and possible lifestyles.

Co-author, Associate Professor Diego García-Bellido from the University of Adelaide and South Australian Museum, said the rich treasure trove of fossils at Emu Bay Shale on South Australia’s Kangaroo Island in particular has helped to build a clearer picture of Earth’s earliest animals.

“The Emu Bay Shale is the only place in the world that preserves eyes with lenses of Cambrian radiodonts. The more than thirty specimens of eyes we now have, has shed new light on the ecology, behavior and evolution of these, the largest animals alive half-a-billion years ago,” A/Prof. García-Bellido said.

In 2011, the team published two papers in the journal Nature on fossil compound eyes from the 513-million-year-old Emu Bay Shale on Kangaroo Island.

The first paper on this subject documented isolated eye specimens of up to one centimeter in diameter, but the team were unable to assign them to a known arthropod species. The second paper reported the stalked eyes of Anomalocaris, a top predator up to one meter in length, in great detail.

“Our new study identifies the owner of the eyes from our first 2011 paper: ‘Anomalocaris’ briggsi —representing a new genus that is yet to be formally named,” Prof. Paterson said.

“We discovered much larger specimens of these eyes of up to four centimeters in diameter that possess a distinctive ‘acute zone’, which is a region of enlarged lenses in the center of the eye’s surface that enhances light capture and resolution.”

The large lenses of ‘Anomalocaris’ briggsi suggest that it could see in very dim light at depth, similar to amphipod crustaceans, a type of prawn-like creature that exists today. The frilly spines on its appendages filtered plankton that it detected by looking upwards.

Dr. Greg Edgecombe, a researcher at The Natural History Museum, London and co-author of the study, added that the South Australian radiodonts show the different feeding strategies previously indicated by the appendages—either for capturing or filtering prey—are paralleled by differences in the eyes.

“The predator has the eyes attached to the head on stalks but the filter feeder has them at the surface of the head. The more we learn about these animals the more diverse their body plan and ecology is turning out to be,” Dr. Edgecombe said.

“The new samples also show how the eyes changed as the animal grew. The lenses formed at the margin of the eyes, growing bigger and increasing in numbers in large specimens—just as in many living arthropods. The way compound eyes grow has been consistent for more than 500 million years.”