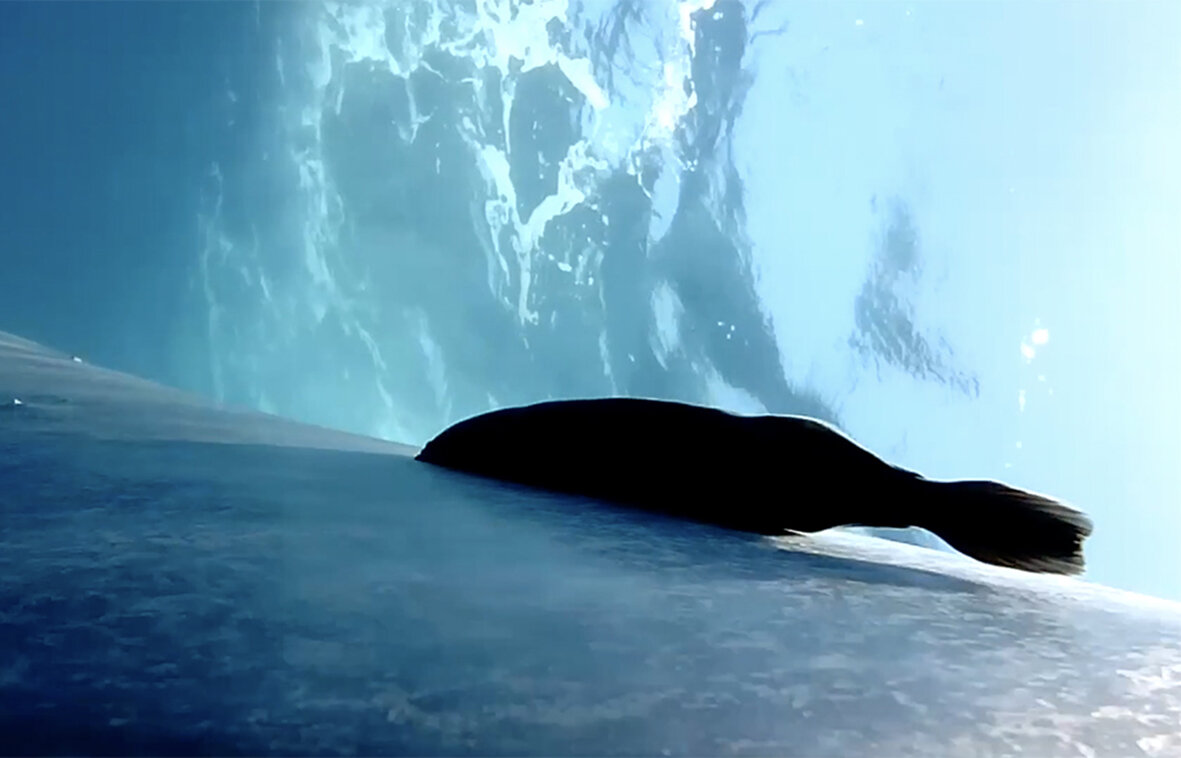 Sticking to the bodies of sharks and other larger marine life is a well-known specialty of remora fishes (Echeneidae) and their super-powered suction disks on their heads. But a new study has now fully documented the “suckerfish” in hitchhiking action below the ocean’s surface, uncovering a much more refined skillset that the fish uses for navigating intense hydrodynamics that come with trying to ride aboard a 100-ft. blue whale (Balaenoptera musculus).

In a study published Oct. 28 in the Journal of Experimental Biology, an international team of researchers studying the unique fluid environments of blue whales traveling off the coast of Palos Verdes and San Diego, CA has reported capturing the first-ever continuous recording of remora behavior on a host organism, using advanced biosensing tags with video recording capabilities.

The study shows the secrets behind the remora fish‘s success in hitchhiking aboard baleen whales more than 30 times their size to safely traverse the ocean—they select the most flow-optimal regions on the whale’s body to stick to, such as behind the whale’s blowhole, where drag resistance for the fish is reduced by as much as 84%. The team’s findings also show that remoras can freely move around to feed and socialize on their ride even as their whale host hits burst speeds of more than 5 meters per second, by utilizing previously unknown surfing and skimming behaviors along special low-drag traveling lanes that exist just off the surface of the whale’s body.

Researchers say the study represents the highest-resolution whole-body fluid dynamic analysis of whales to date, the insights from which could potentially be used as a basis to better understand the behavior, energy use and overall ecological health of the species, as well as improve tagging and tracking of whales and other migratory animals in future studies.

“Whales are like their own floating island, basically like their own little ecosystems. …To get a look into the flow environment of blue whales within a millimeter resolution through this study is extremely exciting,” said Brooke Flammang, assistant professor of biology at New Jersey Institute of Technology and the study’s corresponding author. “Through lucky coincidence, our recordings captured how remoras interact in this environment and are able to use the distinct flow dynamics of these whales to their advantage. It is incredible because we’ve really known next to nothing about how remoras behave on their hosts in the wild over any prolonged period of time.”

Until now, scientists studying the symbiotic relationships between remoras and their hosts in their natural ocean habitat have predominantly relied on still images and anecdotal evidence, leaving much of how they go about their renown sticking behavior beneath the surface a mystery.

In their recent investigation, the researchers employed multi-sensor biologging tags with dual cameras that they attached to the whales via four 2-inch suction disks. The tags were able to calculate various measurements inside the whale’s ecosystem, such as surface pressure and complex fluid forces around the whales, as well as GPS location and traveling speeds through tag vibrations, all while video recording the remoras at 24 frames per second and 720p resolution.

“Fortunately, the drag on dimple-shaped airplane cockpits has been measured many times and we were able to apply this knowledge to help figure out the drag these remoras were experiencing,” said Erik Anderson, co-author, biofluid dynamics researcher at Grove City College and guest investigator at the Woods Hole Oceanographic Institution. “But our study still required calculating, for the first time ever, the flow over a blue whale using computational fluid dynamics … it took an international team of biologists, programmers, engineers and a supercomputer to do that.”

The team’s 211 minutes of video footage and whale tag data processed by researchers at the Barcelona Supercomputing Center captured a total of 27 remoras at 61 locations on the whales overall, finding that the remoras were most often podding and traveling between three of the most hydrodynamically beneficial spots where separating flow and wakes are caused by the whale’s distinct topographical features: directly behind the blowhole, next to and behind the dorsal fin, and the flank region above and behind the pectoral fin.

According to the team’s measurements, Anderson says that the shear force experienced by an average-sized remora in the wake behind the blow hole of a whale swimming at the casual speed of 1.5 m/s can be as low as 0.02 Newtons, half the force of drag in the free stream above. However, Anderson notes that the average remora’s suction force of 11-17 Newtons is more than a match for even the most intense parking spot on the whale, its tail, where the remora experiences roughly 0.14 Newtons of shear force. And though the forces are greater, the same is true even for large remora riding on whales swimming at much higher speeds.

“We learned that the remora’s suction disk is so strong that they could stick anywhere, even the tail fluke where the drag was measured strongest, but they like to go for the easy ride,” said Erik Anderson. “This saves them energy and makes life less costly as they hitchhike on and skim over the whale surface like a NASA probe over an asteroid or some mini-world.”

The tags showed that to conserve energy while getting about on their floating island, the remoras take advantage of the whale’s physics by surfing inside a thin layer of fluid surrounding the whale’s body, known as a boundary layer, where the team found drag force is reduced by up to 72% compared to the much more forceful free stream just above. Flammang says the fishes can lift within 1cm from their host in this layer to feed or join their mates at other low-drag social spots on the whale, occasionally changing directions by skimming, or repeatedly attaching and releasing their suction disks on the whale’s body.

Flammang suspects that remoras are able to move freely without being completely peeled from their speedy hosts, which can move nearly seven times faster than the remora, through something called the Venturi effect.

“The skimming and surfing behavior is amazing for many reasons, especially because we think that by staying about a centimeter off the whale body, they are taking advantage of the Venturi effect and using suction forces to maintain their close proximity,” explained Flammang. “In this narrow space between the remora and whale, when fluid is funneled into a narrow space it moves at a higher velocity but has lower pressure, so it is not going to push the remora away but can actually suck it toward the host. They can swim up into the free stream to grab a bite of food and come back down into the boundary layer, but it takes a lot more energy to swim in the free stream flow.”

Along with uncovering new details of the remora’s hitchhiking prowess, the team says they will continue to explore both the flow environments around whales and the mechanisms by which specifically adapted organisms like remoras successfully attach to hosts in order to improve animal tag technologies and designs for extended periods of behavioral and ecological monitoring. The team is also using their new insights into the remora‘s preferred low-drag attachment locations to better inform where they might tag whales in studies to come.

“It’s an extremely arduous process to study whales what with permitting, research regulations and the game of chance of finding animals, all for the tags to usually fall off within 48 hours,” said Flammang. “If we can come up with a better way to collect longer term data through better tag placement or better technologies, it could really advance our learning of the species, and many other animals that remoras attach to.”