Is one dose of the COVID-19 vaccine enough? 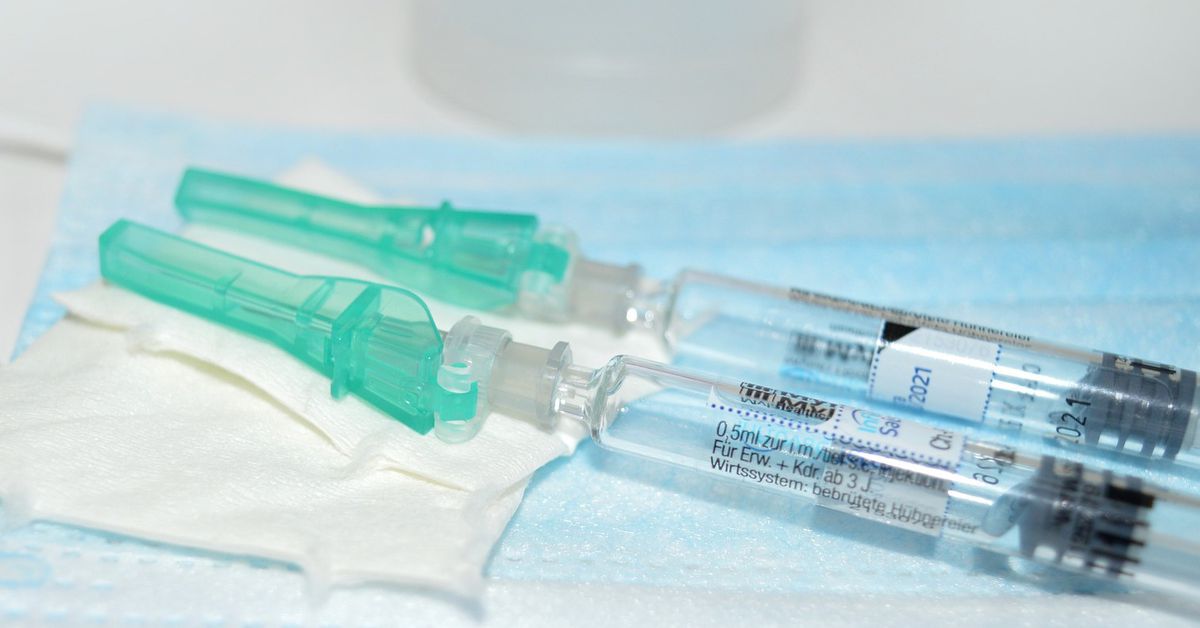 In the last few weeks, approximately 5.3 million people received their first shot of one of two newly-authorized COVID-19 vaccines from drug makers Pfizer and Moderna. Like most vaccines, both of them require more than one shot to generate a high level of immune response. In late-stage clinical trials, both vaccines have been found to have a high efficacy after recipients have received both shots. The Moderna vaccine is 94.1 percent effective when the second dose is administered 28 days after the first. The Pfizer vaccine is 95 percent effective after the booster is given 21 days following the first shot.

“It’s become clear to me, on the ground here, that there is confusion as to how much vaccine is available and when those doses are going to be available and delivered,” says Matthew Woodruff, an immunologist and instructor at Emory University’s School of Medicine.

Woodruff, who can see the Centers for Disease Control’s headquarters from the building where he works, says the vaccine rollout has been extremely chaotic. “I think that we should know exactly how many vaccines we have, and how many vaccines each organization is going to get and when they’re going to get them,” he says. “I think it’s the responsibility of an organized, centralized system to make sure that those data are available. And I don’t get the sense that they are.”

The 5.3 million Americans who have received a vaccine represents only about a third of the vaccine doses that have been distributed across the nation. But delayed vaccine distribution ultimately prolongs the pandemic, and some public health officials have rationed doses in response. Officials in the UK have started to spread out the time between the first and second dose to as much as three months with the idea that giving one dose to many is better than two doses to fewer.

Earlier this month, the FDA unequivocally stated that it supports remaining on the recommended dosing schedule and intensity. “We have been following the discussions and news reports about reducing the number of doses, extending the length of time between doses, changing the dose (half-dose), or mixing and matching vaccines in order to immunize more people against COVID-19,” the statement reads. These questions should be answered in clinical trials, they say, but it’s “premature and not rooted solidly in the available evidence” to try any of these methods on the public. People who study coronaviruses and human immunity (as well as the FDA) agree.

“I think one shot is definitely better than no shot,” says Kari Moore Debbink, a virologist at Bowie State University.. “Having some protection is better than not having any protection.” But beyond that, she says, the picture gets murkier: “We know that two shots [given on schedule] does a good job. We just don’t really know what one shot is going to do.”

Looking back at what is already known about the immune system and vaccines allows scientists to take some educated guesses. Vaccines play two roles: First, they lower an individual’s risk of becoming infected with a pathogen, and, when enough individuals get vaccinated they help raise the population’s overall immunity, which lowers the rate of transmission and, hopefully, keeps others (including those not immunized) from getting sick.

Many vaccines require two or more doses, given over a period of time, to reach their full effectiveness. In these cases, the first dose gives your body what’s known as a “primary response,” says Bowie State’s Debbink, which causes your body to start making antibodies for that specific pathogen. After that first response, some of the cells involved in the response become memory cells, which chill out in your immune system until they see the pathogen (or the vaccine) again. At that point, those cells activate and immediately begin rallying the immune system to fight. After a second contact with the enemy, more memory cells are made, which means the next time the pathogen is seen, that swift response will be bigger.

But the science of immunity is complicated: The kind of vaccine, the dosage it’s given in, and the life stage at which you receive it are all determining factors in how strong an immune response it produces. “Depending on the approach and depending on the actual pathogen, sometimes you’re going to get a stronger reaction from the vaccine,” she says. For those with strong immune systems, generally younger people in good health, one shot of the Pfizer or Moderna vaccines could be enough to allow them to ward off the virus, says Debbink. But for those with weakened immune systems and older people—in other words, the most vulnerable to COVID-19—two shots will provide the higher levels of protection they need.

Nearly all of the vaccines currently in late-stage trials for COVID-19, along with the approved vaccines, have been tested for use in a two-dose regimen for this reason with the exception of Johnson & Johnson, which began a phase 3 trial for its one-dose vaccine in September. Moncef Slaoui, Operation Warp Speed’s chief medical advisor, said last week that the vaccine is still on track for an emergency use authorization (EUA) filing at the end of January. “This is a one-shot vaccine that comes with very significant advantages, so we are very eager to see the data,” he said.

But in November, the company also started a second phase 3 trial with a two-dose regimen, which gave some researchers pause. “Clearly they must have seen the data from the one-dose,” says Monica Gandhi, a professor of medicine at the University of California, San Francisco, “that it wasn’t effective in building [an immune] response.”

From a logistics and public health perspective, Gandhi says, a single-shot vaccine would be ideal. Without the need for a booster, it would more quickly raise population immunity and be easier to administer. But for that type of vaccine to work, the single dose would need to be incredibly effective, and well over a century of vaccine development has demonstrated that high levels of immunity are directly related to multiple exposures. It may not be the case that the immune system can reach 94 to 95 percent SARS-CoV-2 immunity, the levels produced by two shots of the Pfizer or Moderna vaccines, in one shot. Both phase 3 trials focused on the efficacy of the two-dose regimen.

“It’s not to say that one dose won’t work. It’s that we don’t have the data to say that it will,” says Debbink. “And the consequences are big either way.”

One exception to the multi-shot vaccine rule is the flu shot, which is given annually for that season’s dominant influenza strain. Because influenza mutates so fast, it doesn’t make sense to design a two-shot regime, says Gandhi: From a public health perspective, investing in one shot for as many people as possible, each season, makes more sense.

SARS-CoV-2 has proven to be much less mutagenic than Human Influenza Virus A and B, which cause annual outbreaks. It mutates more slowly because, alone among RNA viruses, coronaviruses have a “proofreading” mechanism as part of their equipment. This mechanism, which is common in DNA, catches errors in reproduction as they happen, which slows the rate at which mutations occur.

But when this particular coronavirus was new, it wasn’t yet known if it would mutate as slowly as other coronaviruses. That’s why there were worries that “COVID-19 season” would join “flu season” as an annual menace, prompting a new vaccine each year. Thankfully “it does not seem that that will need to happen,” Gandhi says.

Still, SARS-CoV-2 is mutating, and giving it fewer hosts will reduce the rate of its mutation. That’s one reason widespread vaccination is so important. There’s also a body of empirical evidence showing that even one shot will significantly raise immunity.

During Moderna’s and Pfizer’s late-stages trials, researchers did analyze the efficacy of just one dose of each drug. Moderna’s drug had an 80 percent efficacy and Pfizer’s, on the other hand, showed a 52.4 percent efficacy after the first dose. Although Moderna’s number sounds much better, neither trial was designed to test the vaccines after a single dose. Woodruff also cautions that the sample size from which both efficacy numbers are derived is relatively small. We just don’t know yet how effective, in real-world settings, either vaccine is likely to be after a single shot.

When you are receiving a second dose, the CDC says that it should be of the same vaccine as the first dose. In other words, if you had a Pfizer first shot, you should have a Pfizer second shot, and same for Moderna. This advice is contrary to the strategy being pursued in the UK, which advises using whichever vaccine is available for the second shot.

Both the Pfizer and Moderna vaccines are mRNA vaccines, which have never been approved for general public use before, although they’ve been studied in the lab and in clinical trials since the 1990s. Although these vaccines stimulate the same immune responses, they do so in a different way from other kinds of vaccines, which means scientists don’t have a good way to predict how enduring those immune responses are likely to be.

“If we want to move to a one-dose format, we should be designing those studies now,” says Woodruff. “Because of the logistics of our vaccine rollout, unfortunately, we may get those answers anyway, because it seems a good number of people are going to get one [shot] but not have access to a second.”

Another concern with only administering one dose is whether the resulting low levels of immunity over a large segment of the population will create opportunities for the virus to mutate. Stat’s Helen Branswell recently reported that some scientists are concerned the UK’s new policy of stretching out doses of the vaccine by months, instead of weeks, could lead to the evolution of a vaccine-resistant strain of SARS-CoV-2.

Debbink cautions that it’s really difficult to analyze how any one strain of a virus would evolve in real-world conditions. In regards to the UK approach, “I would see the primary problem as being an immune response that wanes too quickly,” she says. If any one person’s immunity to the virus drops too low after their first dose of a vaccine before they finally get a second one, that second shot might not “boost” them up to a high enough level of immunity.

And as it is, we aren’t likely to achieve population-level immunity (also known as “herd immunity”) anytime soon, Debbink says—certainly not this spring. In order to even make a prediction about when that day will come, she says, “I would have to know that we have the vaccine supply and the infrastructure for rolling it out.”

Those issues aren’t unique to the U.S. But given our high rate of infection, they’re incredibly pressing here at home. If you’ve had one dose of the vaccine, it’s important to do your best to get your second. It will help keep you and others safe. “There’s every reason to believe that you would still benefit from a second dose,” says Woodruff.