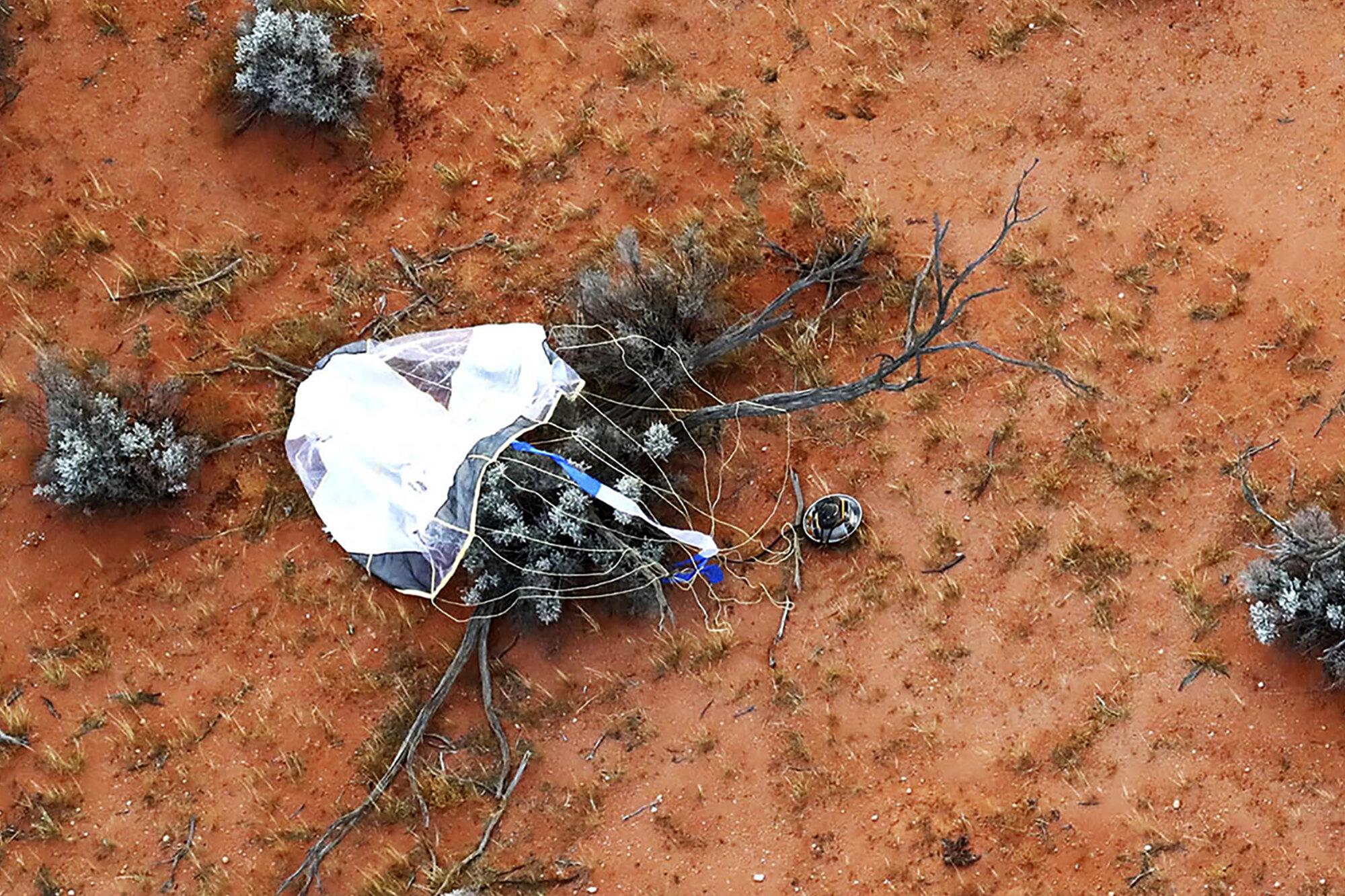 A Japanese capsule carrying the world’s first asteroid subsurface samples shot across the night atmosphere early Sunday before landing in the remote Australian Outback, completing a mission to provide clues to the origin of the solar system and life on Earth.

The spacecraft Hayabusa2 released the small capsule on Saturday and sent it toward Earth to deliver samples from a distant asteroid. At about 10 kilometers (6 miles) aboveground, a parachute was opened to slow its fall and beacon signals were transmitted to indicate its location in the sparsely populated area of Woomera in southern Australia.

About two hours after the reentry, the Japan Aerospace Exploration Agency, or JAXA, said its helicopter search team found the capsule in the planned landing area. The retrieval of the pan-shaped capsule, about 40 centimeters (15 inches) in diameter, was completed after another two hours.

“The capsule collection work at the landing site was completed,” the agency said in a tweet. “We practiced a lot for today … it ended safe.”

The capsule’s return came weeks after NASA’s OSIRIS-REx spacecraft made a successful touch-and-go grab of surface samples from the asteroid Bennu. China, meanwhile, announced last week that its lunar lander collected underground samples and sealed them within the spacecraft for return to Earth, as space developing nations compete in their missions.

Thomas Zurbuchen, a Swiss-American astrophysicist and the associated administrator of NASA’s Science Mission Directorate, congratulated the Japanese space agency and “the many individuals in Japan and beyond who made this possible.”

“Together, we’ll gain a better understanding of the origins of our solar system, & the source of water & organic molecules that may have seeded life on Earth,” Zurbuchen wrote on Twitter.

The fireball could be seen even from the International Space Station. A Japanese astronaut, Soichi Noguchi, who is now on a six-month mission there, tweeted: “Just spotted #hayabusa2 from #ISS! Unfortunately not bright enough for handheld camera, but enjoyed watching capsule!”

Hayabusa2 left the asteroid Ryugu, about 300 million kilometers (180 million miles) away, a year ago. After it released the capsule on Saturday, it set off on a new expedition to another distant asteroid.

The capsule descended from 220,000 kilometers (136,700 miles) away after it was separated from Hayabusa2 in a challenging operation that required precision control. JAXA officials said they hoped to conduct a preliminary safety inspection at an Australian lab and bring the capsule back to Japan soon.

Dozens of JAXA staff had been working in Woomera to prepare for the sample return. They set up satellite dishes at several locations in the target area inside the Australian Air Force test field to receive the signals.

Australian National University space rock expert Trevor Ireland, who was in Woomera for the arrival of the capsule, said he expected the Ryugu samples to be similar to the meteorite that fell in Australia near Murchison in Victoria state more than 50 years ago.

“The Murchison meteorite opened a window on the origin of organics on Earth because these rocks were found to contain simple amino acids as well as abundant water,” Ireland said. “We will examine whether Ryugu is a potential source of organic matter and water on Earth when the solar system was forming, and whether these still remain intact on the asteroid.”

Scientists say they believe the samples, especially ones taken from under the asteroid’s surface, contain valuable data unaffected by space radiation and other environmental factors. They are particularly interested in analyzing organic materials in the samples.

JAXA hopes to find clues to how the materials are distributed in the solar system and are related to life on Earth. Makoto Yoshikawa, the Hayabusa2 project mission manager, said 0.1 gram of the dust would be enough to carry out all planned research.

For Hayabusa2, it’s not the end of the mission it started in 2014. It is now heading to a small asteroid called 1998KY26 on a journey slated to take 10 years one way, for possible research including finding ways to prevent meteorites from hitting Earth.

So far, its mission has been fully successful. It touched down twice on Ryugu despite the asteroid’s extremely rocky surface, and successfully collected data and samples during the 1½ years it spent near Ryugu after arriving there in June 2018.

In its first touchdown in February 2019, it collected surface dust samples. In a more challenging mission in July that year, it collected underground samples from the asteroid for the first time in space history after landing in a crater that it created earlier by blasting the asteroid’s surface.

Asteroids, which orbit the sun but are much smaller than planets, are among the oldest objects in the solar system and therefore may help explain how Earth evolved.