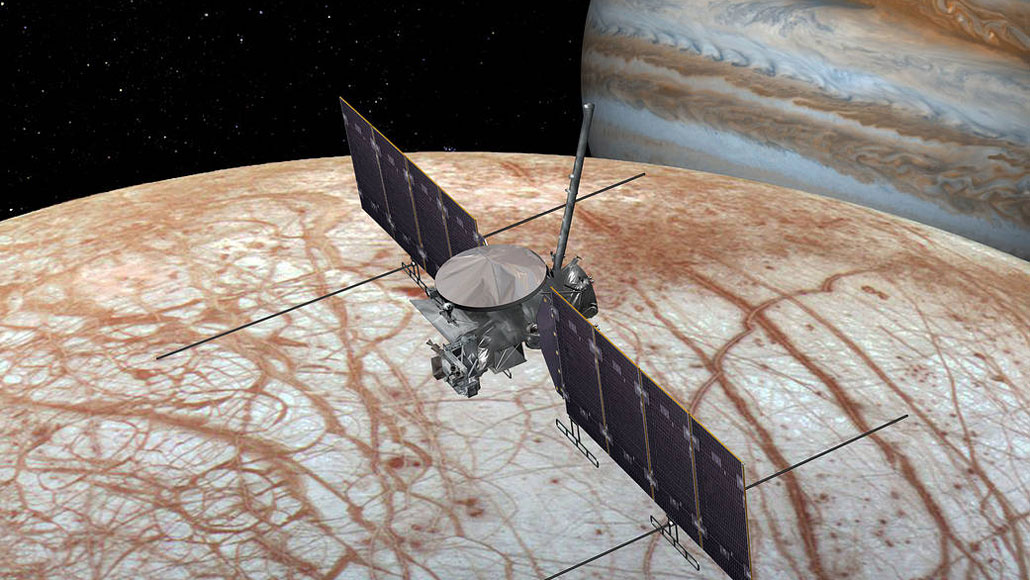 Jupiter’s icy moon Europa could give the word “moonlight” a whole new meaning. New lab experiments suggest the nightside of this moon glows in the dark.

Europa’s surface, thought to be mostly water ice laced with various salts, is continually bombarded with energetic electrons by Jupiter’s intense magnetic field (SN: 5/19/15). When researchers simulated that interaction in the lab by shooting electrons at salty ice samples, the ice glowed. The brightness of that glow depended on the kind of salt in the ice, researchers report online November 9 in Nature Astronomy.

If the same interaction on Europa creates this never-before-seen kind of moonlight, a future mission there, such as NASA’s planned Europa Clipper spacecraft, may be able to use this ice glow map Europa’s surface composition. That, in turn, could give insight into the salinity of the ocean thought to lurk under Europa’s icy crust (SN: 6/14/19).

The discovery of Europa’s potential ice glow “was serendipity,” says Murthy Gudipati, who studies the physics and chemistry of ices at NASA’s Jet Propulsion Laboratory in Pasadena, Calif. Gudipati and colleagues originally set out to investigate how electron bombardment might change the chemistry of Europa’s surface ice. But in video footage of their initial experiments, the team noticed that ice samples pelted with electrons gave off an unexpected glow.

Intrigued, the researchers turned their electron beam on samples of pure water ice, as well as water ice mixed with different salts. Each ice core was cooled to the surface temperature of Europa (about –173° Celsius) and showered with electrons that had the same energies as those that strike Europa. Over 20 seconds of irradiation, a spectrometer measured the wavelengths of light, or spectrum, given off by the ice.

The ice samples all gave off a whitish glow, because they emitted light at many different wavelengths. But the brightness of each ice sample depended on its composition. Ice containing sodium chloride, also known as table salt, or sodium carbonate appeared dimmer than pure water ice. Ice mixed with magnesium sulfate, on the other hand, was brighter.

“I was doing some back of the envelope calculations [of] what would be the brightness of Europa, if we were to be standing on it in the dark,” Gudipati says. “It’s approximately … as bright as me walking on the beach in full moonlight.”

Based on the specs proposed for a camera to fly on the Europa Clipper mission, Gudipati and colleagues estimate that the spacecraft could see Europa’s ice glow during a flyby of the dark side of the moon. Dark patches of Europa could reveal sodium-rich regions, while brighter areas may be rich in magnesium.

But seeing ice glow in the lab does not necessarily mean it happens the same way on Europa, Hanley cautions. Jupiter’s icy moon has been barraged by high-energy electrons for a lot longer than 20 seconds. “Is there ever a point where you might break down the salts, and this glow stops happening?” she wonders.

Other planetary scientists, meanwhile, are not convinced that Europa’s surface is highly salted. These researchers, including Roger Clark of the Planetary Science Institute in Lakewood, Colo., think the apparent hints of salts on Europa are actually created by acids, such as sulfuric acid. Europa’s surface may be coated in both salts and acids, Clark says. “What [the researchers] need to do next is irradiate acids … to see if they can tell the difference between salt with water ice and acids with water ice.”