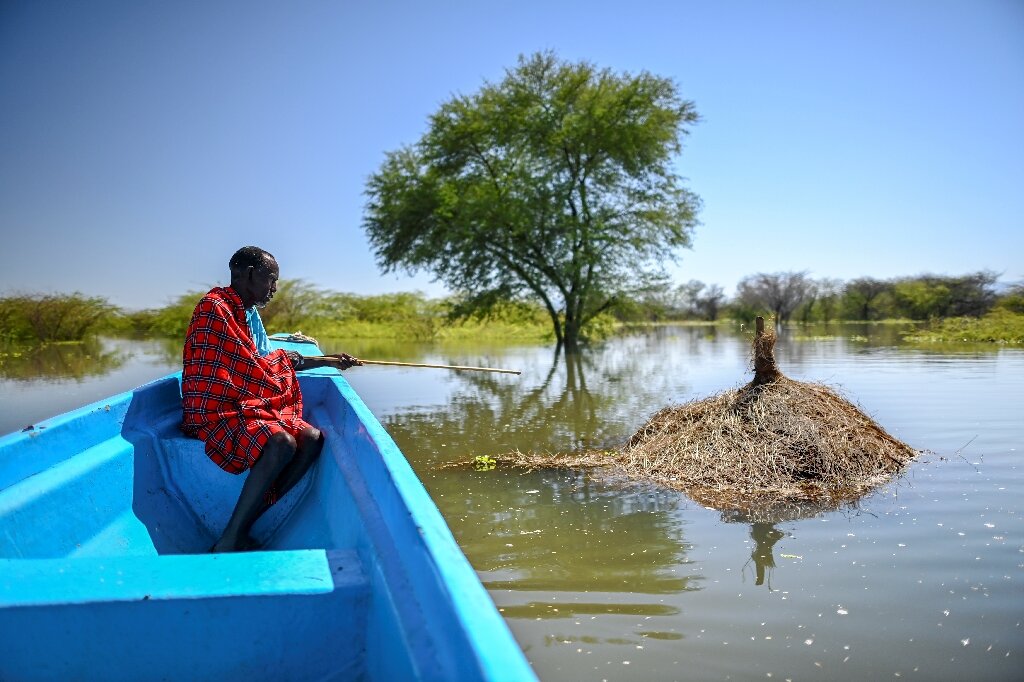 Peering into the lake, the village elder struggled to pinpoint where beneath the hyacinth and mesquite weeds lay the farm he lived in his entire life until the water rose like never before and swallowed everything.

A clump of sodden straw marked the spot: the tip of his thatch hut jutting from the murky depths, all that remained of his homestead after Kenya’s Lake Baringo swelled to record highs this year, submerging villages, schools, health clinics and holiday resorts.

“In my 60 years, I have never seen or experienced anything like this,” said Richard Lichan Lekuterer, his gaze level with the tops of once-towering acacia trees poking above the water, the landscape altered beyond recognition.

Baringo and the other great lakes of Kenya’s Rift Valley have risen to levels not seen in at least half a century, some by several metres or more this year alone, following months of extreme rainfall scientists have linked to a changing climate.

These tremendous bodies of water have ebbed and flowed through the ages, supporting life along the banks, but records show this latest surge is unlike any witnessed in recent memory.

“It was like the speed of the wind,” said Lekuterer, who relocated deep inland when the water shot up in March and is preparing to move again as the tide inches nearer.

The phenomenon is causing immense flooding along a chain of fresh and saltwater lakes stretching 500 kilometres (310 miles) along an ancient fault from the deserts of Turkana in Kenya’s north, to the fertile shores of Naivasha to the south.

Tens of thousands of people have been driven to higher ground and homes, grazing land and businesses abandoned as the lakes have unrelentingly pushed outward.

The crisis shows no sign of easing, with seasonal rains forecast this month threatening further inundation.

“It has never been this bad before,” said Murray Roberts, who has lived on Baringo nearly 70 years, where he restores degraded land with his partner Dr Elizabeth Meyerhoff through their Rehabilitation of Arid Environments Trust.

Baringo has swollen about 70 square kilometres (27 square miles) since 2011 but rose sharply earlier this year, flooding their offices and a nearby dispensary.

Roberts’ childhood home, and a family holiday business, disappeared beneath the surface.

Like Baringo, the surge at Lake Naivasha, some 200 kilometres south, began slowly about a decade ago, evoking little concern as the basin refilled after a long dry spell.

But it kept rising and in April suddenly accelerated, soon eclipsing the last historic high measured in the 1960s. The lake is now tracking closer to an extreme peak recorded in the early 20th century.

A monitoring station run by the Water Resources Authority (WRA), a government agency, indicates the lake rose 2.7 metres (8.9 feet) between April and June, pushing water half a kilometre inland.

“It’s been phenomenal,” said Guy Erskine, as hippos wallowed in his submerged hotel at Sanctuary Farm, a conservancy on Lake Naivasha his family has owned since 1978.

Government scientists are exploring possible causes for the drastic upwelling, including whether silt flushing downstream from deforestation in the highland catchments could be reducing the lakes’ storage capacity.

Research into other theories, such as the influence of seismic activity and increased seepage from underground aquifers, is less conclusive.

It follows one of the wettest periods in East Africa in recent times.

Above-average temperatures in the Indian Ocean have spurred consecutive years of extreme and erratic rainfall, delivering frequent unseasonal downpours over the escarpments and rivers that feed the lakes.

“Things have changed… The effect is more pronounced than 50 years ago,” says Mohamed Shurie, a geologist and CEO of the WRA.

The massive inflow is also upsetting a delicate ecological balance in a biodiverse region famous for attracting masses of pink flamingos.

The government is particularly concerned about the repercussions should saltwater from an ever-expanding Lake Bogoria, a flamingo refuge and wetland of international importance, merge with the freshwaters from Baringo 20 kilometres to the north.

Two other critical habitats frequented by the migratory birds, Lake Elementaita and Lake Nakuru, are also brimming, the latter at a 50-year high.

The imposing entrance gate to Lake Nakuru National Park, one of Kenya’s premier safari destinations, barely pokes above the water, which has pushed one kilometre beyond the perimeter fence, flooding nearby villages.

On an island in Baringo, a number of Rothschild’s giraffe await relocation to the mainland, their habitat having shrunk from about 100 acres to less than 10. The Kenya Wildlife Service (KWS) and Northern Rangelands Trust have already rescued warthogs, impala and ostrich.

“Our fear is, when there’s not enough food in the homestead, people might turn to the vulnerable animals,” Komen said.

In Naivasha, a tourist hotspot popular with weekenders from Nairobi, the timing is especially cruel.

Staff at hotels and restaurants laid off during the coronavirus pandemic now find themselves without workplaces to return to as travel restrictions ease—and with their own homes knee-deep in water.