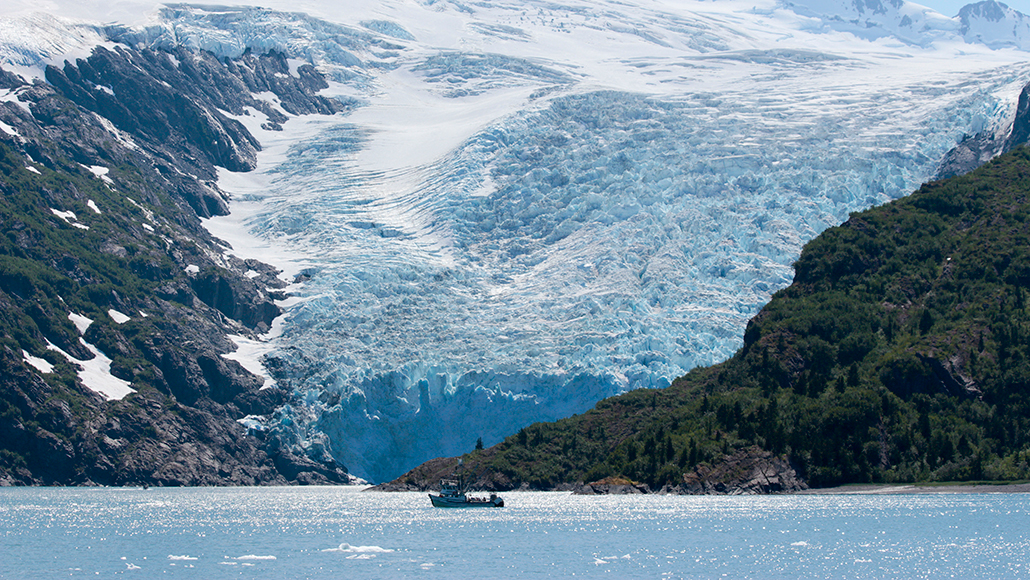 The retreat of North America’s ice sheets in the latter years of the last ice age may have begun with “catastrophic” losses of ice into the North Pacific Ocean along the coast of modern-day British Columbia and Alaska, scientists say.

In a new study published October 1 in Science, researchers find that these pulses of rapid ice loss from what’s known as the western Cordilleran ice sheet contributed to, and perhaps triggered, the massive calving of the Laurentide ice sheet into the North Atlantic Ocean thousands of years ago. That collapse of the Laurentide ice sheet, which at one point covered large swaths of Canada and parts of the United States, ultimately led to major disturbances in the global climate (SN: 11/5/12).

The new findings cast doubt on the long-held assumption that hemispheric-scale changes in Earth’s climate originate in the North Atlantic (SN: 1/31/19). The study suggests that the melting of Alaska’s remaining glaciers into the North Pacific, though less extreme than purges of the past, could have far-ranging effects on global ocean circulation and the climate in coming centuries.

“People typically think that the Atlantic is where all the action is, and everything else follows,” says Alan Mix, a paleoclimatologist at Oregon State University in Corvallis. “We’re saying it’s the other way around.” The Cordilleran ice sheet fails earlier in the chain of reaction, “and then that signal is transmitted [from the Pacific] around the world like falling dominoes.”

In 2013, Mix and colleagues pulled sediment cores from the seafloor of the Gulf of Alaska in the hope of figuring out how exactly the Cordilleran ice sheet had changed prior to the end of the last ice age. These cores contained distinct layers of sand and silt deposited by the ice sheet’s calved icebergs during four separate occasions over the last 42,000 years. The team then used radiocarbon dating to determine the chronology of events, finding that the Cordilleran’s ice purges “surprisingly” preceded the Laurentide’s periods of abrupt ice loss, known as “Heinrich events,” by 1,000 to 1,500 years every single time.

“We’ve long known that these Heinrich events are a big deal,” says coauthor Maureen Walczak, a paleoceanographer also at Oregon State University. “They have global climate consequences associated with increases in atmospheric CO2, warming in Antarctica … and the weakening of the Asian monsoon in the Pacific. But we’ve not known why they happened.”

Though scientists can now point the finger at the North Pacific, the exact mechanism remains unclear. Mix proposes several theories for how Cordilleran ice loss ultimately translated to mass calving of ice along North America’s east coast. It’s possible, he says, that the freshwater deposited in the North Pacific traveled northward through the Bering Strait, across the Arctic and down into the North Atlantic. There, the buoyant freshwater served as a “cap” on the ocean’s denser saltwater, preventing it from overturning. This process could have led to the water getting warmer, destabilizing the adjacent ice sheet.

Another theory posits that the lower elevation of the diminished Cordilleran ice sheet altered how surface winds entered North America. Normally, the ice sheet would act like a fence, diverting winds and their water vapor southward as they entered North America. Without this barrier, the transport of heat and freshwater between the Pacific and Atlantic Ocean basins is disrupted, changing the salinity of the Atlantic waters and ultimately delivering more heat to the ice there.

Today, Alaska’s glaciers serve as the last remnants of the Cordilleran ice sheet. Many are in a state of rapid retreat due to climate change. This melting ice, too, drains into the Pacific and Arctic oceans, raising sea levels and interfering with normal ocean mixing processes. “Knowing the failure of ice in the North Pacific seemed to presage really rapid ice loss in the North Atlantic, that’s kind of concerning,” Walczak says.

If the ice melt into the North Pacific follows similar patterns to the past, it could yield significant global climate events, the researchers suggest. But Mix cautions that the amount of freshwater runoff needed to trigger changes elsewhere in the global ocean, and climate, is unknown. “We know enough to say that such things happened in the past, ergo, they are real and could happen again.”

It’s not clear, though, what the timing of such global changes would be. If the ice losses in the Atlantic occurred in the past due to a change in deep ocean dynamics triggered by Pacific melting, that signal would likely take hundreds of years to reach the other remaining ice sheets. If, however, those losses were triggered by a change in sea levels or winds, other ice sheets could be affected a bit faster, though still not this century.

The Laurentide ice sheet is, of course, long gone. But two others remain, in Greenland and Antarctica (SN: 9/30/20, 9/23/20). Both have numerous glaciers that terminate in the ocean and drain the interior of the ice sheets. This makes the ice sheets susceptible to both warmer ocean water and sea level rise.

Alaska’s melting glaciers have already fueled about 30 percent of global sea level rise. “One of the hypotheses we have is that sea level rise is going to destabilize the ice shelves at the mouths of those glaciers, which will break off like champagne corks,” Walczak explains. When that happens, the idea goes, the ice sheets will start collapsing faster and faster.

Records of climate change in the Pacific, like the one Walczak and colleagues have compiled, have been hard to come by, says Richard Alley, a glaciologist at Pennsylvania State University who wasn’t involved with the study. “These new data may raise more questions than they answer,” he says. “But by linking North Pacific Ocean circulation … to the global template of climate oscillations, the new paper gives us a real advance in understanding all of this.”