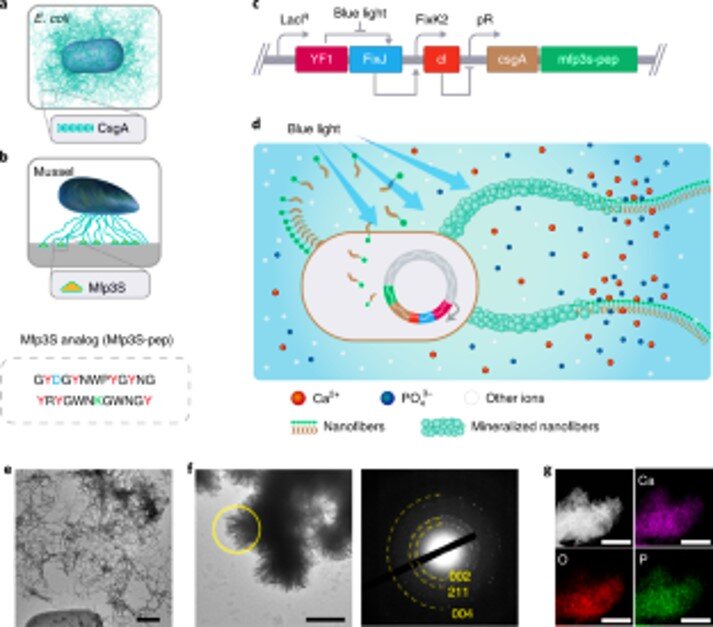 Living organisms have evolved mechanisms of biomineralization to build structurally ordered and environmentally adaptive composite materials. While research teams have significantly improved biomimetic mineralization research in the lab, it is still difficult to engineer mineralized composites with structural features and living components much like their native counterparts. In a new report now published on Nature Chemical Biology, Yanyi Wang and a research team in physics, advanced materials, synthetic biology, and engineering in China, developed living patterned and gradient composites inspired by natural graded materials. They coupled light-inducible bacterial biofilm formation with biomimetic hydroxyapatite (HA) mineralization in this work, to show how the location and degree of mineralization could be controlled. The cells in the composites remained viable while sensing and responding to environmental signals. The composites showed a 15-fold increase in Young’s modulus (i.e., stiffness, the ratio between stress and strain) after mineralization. The work sheds light to develop living composites with dynamic responsiveness and environmental adaptability.

Biomineralization in the lab

Living organism can produce a variety of hierarchical organic-inorganic composite structures based on biomineralization, where notable examples include the radular teeth of chitons, fish scales and crayfish mandibles that fulfill diverse biological functions. The timing and degree of biomineralization must be precisely controlled by cells to form accurate structures and functions in living organisms. Recent research in biomimetic mineralization had highlighted the importance of exploring cell-controlled approaches to produce living patterns and graded composites as a promising yet largely unexplored area. The disciplines of synthetic biology and materials science have unleashed a range of sophisticated and environmentally friendly gene circuits to bioengineer a range of new cellular functions. In this work, Wang et al. developed bioinspired, living composite materials by harnessing light-inducible Escherichia coli biofilms coupled with biomimetic mineralization. The work will open doors to integrate engineered cells to produce mineralized materials with structural and living features.

The team selected fusion proteins to engineer mineralization promoting E. coli biofilms. Based on previous experiments, they selected protein Mefp5 – originating from Mytilus edulis, followed by Mfp3S – originating from Mytilus californianus and another variant of the Mfp3S peptide (Mfsp3S-pep) to initiate mineralization and promote adhesion. The team constructed fusion proteins containing a major protein domain of the E. coli biofilm to form CsgA-Mfp fusion proteins and confirmed their potential secretion from engineered cells. They then selected the CsgA–Mfp3S-pep fusion protein as a representative for hydroxyapatite mineralization and conducted experiments to verify the function of the protein to highlight their role during mineralization and crystal formation. Thereafter, Wang et al. constructed a light-inducible biofilm-forming strain named lightreceiver-CsgA-Mfp3S-pep that can be tightly regulated via blue light illumination.

The light-sensitive strain could generate functional biofilm materials after illumination with light to promote the mineralization of hydroxyapatite (HA). To validate this, the scientists exposed the light-sensitive strain to blue light in a Petri dish and used histological staining and transmission electron microscopy (TEM) imaging to show the production of amyloid fibers in the biofilms. Comparatively, they did not observe amyloid fibers in samples grown in the dark. The engineered extracellular matrix also acted as a template for HA mineralization in time, which they confirmed after 7-days of incubation based on X-ray diffraction (XRD) and energy-dispersive X-ray spectroscopy (EDS) techniques.

Based on the light-sensitive nature of the engineered biofilms, Wang et al. manipulated biofilm formation in space-time to control the formation of composites. They accomplished this by illuminating a leaf pattern on liquid bacterial cultures in polystyrene petri dishes that faithfully recapitulated the projected light pattern on to the bacterial biofilms. After 7-days of mineralization, the composite generated in the petri dishes retained the original pattern as observed using scanning electron microscopy. The light-regulated approach controlled the shape of the composite based on grid-pattern projections and spatial resolution of light in the microscale—comparable to the size of the living bacteria. The team then verified the viability of live, intact cells by engineering the living composites to express fluorescent proteins, as confirmed using confocal microscopy images. Thereafter, they used thermogravimetric analysis to quantify the inorganic components of mineralized composites, where the inorganic material increased proportionally with time on immersion in simulated body fluid (SBF). Wang et al. also compared the Young’s modulus of the biofilm using a micro-indentation technique to show how mineralization strengthened the E. coli biofilms to protect the cells.

Tissue engineering approaches have emphasized the need to precisely identify between hard and soft tissues for successful physiological performance, therefore the light intensity could be tuned to control the density and mechanical properties of engineered living materials. Zhang et al. accomplished this by exposing E. coli cultures to different intensities of illumination to reveal how biofilm thickness decreased with the decreasing intensity of blue light. They further showed how mineralization was tightly and locally directed by the engineered Mfsp3S-pep fusion proteins. Then they studied the local mechanical properties of illuminated regions with micro-indentation to observe a fourfold increase in Young’s modulus to highlight living composites engineered with tunable mineral gradients and mechanical properties for regenerative tissue-to-bone interfaces in bone tissue engineering applications.

The scientists also studied the capacity for the engineered biofilms to aggregate for damage repair by gluing polystyrene microspheres, alongside HA-mineralization. As proof-of-concept, they applied living mineralized composites to fill and repair cracks engineered on the surface of a polystyrene Petri dish. During the experiments, the light-induced adhesive biofilms captured microspheres in solution to fill the purposely created damaged furrow, while nanofibers in biofilms acted as a template for hydroxyapatite mineralization to consolidate light-induced cementation under blue light illumination. Using scanning electron microscopy, Wang et al. showed how bacteria and the surrounding extracellular matrix adhered together with microspheres to illustrate the adhesive function of the living biofilms. The HA-mineralized composites formed dense, concrete-like layers that filed the damaged furrow to highlight the mineralization functionality of the living composites for enhanced durability and repair applications.

In this way, Yanyi Wang and colleagues produced bioinspired living patterned composites and living graded composites with a light-regulated biofilm platform. The resulting composites displayed environmental responsiveness similar to their native counterparts. The cells within the composites remained viable and responded to environmental stimuli even after mineralization. The work opens a path to create living, functional organic-inorganic composites with adaptive and self-repairing features with applications across biomedicine, regenerative medicine, and bioremediation.