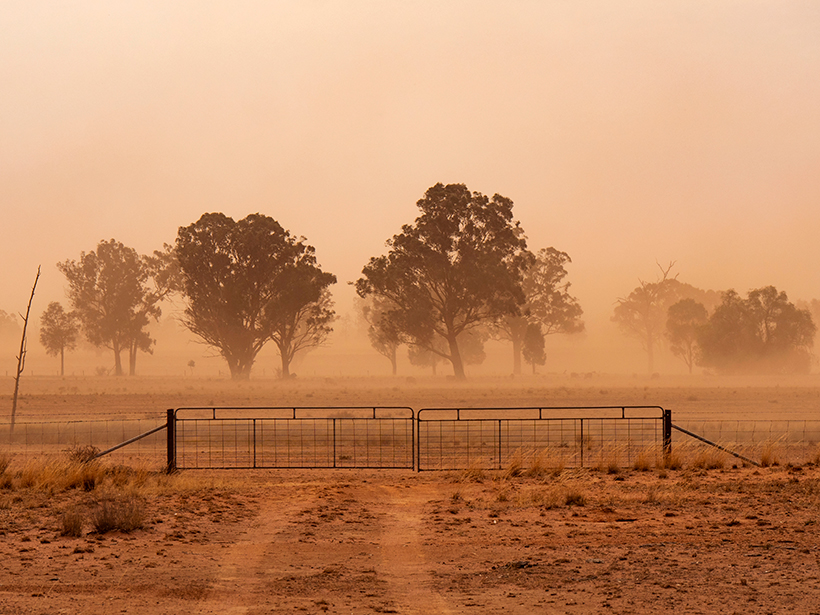 Public health experts increasingly recognize that adverse weather and climate conditions can have negative impacts on people’s mental health as well as physical health. Many national and international organizations, for example, have established or expanded postdisaster services to include mental health assistance and support. However, little is understood about how mental health is affected by the duration of such conditions, especially when they last for months or years on end, as can happen in droughts.

Past quantitative research has focused on characteristics of drought, such as the severity of dryness, and on linking those with mental health outcomes, explained Tuyen Luong, a doctoral student at the University of Newcastle’s Centre for Resources Health and Safety (CRHS) in New South Wales, Australia. “In our study, we focus on linking duration of drought…with the mental health of people to explore their mental response to drought over time.”

Residents of remote and rural communities in southeastern Australia likely remember the Millennium Drought, which lasted from 1997 to 2010 and devastated environments, economies, and lives across the region. From 2007 to 2013, scientists conducted a mental health study of people living in those communities to explore potential drivers of poor mental health, including the prolonged drought.

Luong and her colleagues recently analyzed data from that study and found that the Millennium Drought did indeed have adverse mental health impacts on people living through it in remote and rural communities. Moreover, although some acute symptoms of poor mental health seemed to lessen after a few years of the drought, other symptoms persisted for longer.

Luong will present this research on 16 December at AGU’s Fall Meeting 2020.

Climate change is worsening drought conditions around the world and shifting natural drought cycles out of sync with agricultural growing periods. In rural Australia, however, drought has always been a risk.

Moreover, the effects of drought on physical health, financial stability, and other stressors like water availability are different for people living in rural and remote communities compared with people in urban settings. The results of drought–mental health studies that focus only on urban settings likely won’t be applicable in rural and remote contexts, Austin said.

The Australian Rural Mental Health Study (ARMHS) repeatedly surveyed more than 1,800 households in remote and rural communities in New South Wales. Over a 6-year period, participants self-reported psychological symptoms of poor mental health like distress, worry, depression, anxiety, and suicidal thoughts, as well as the role of determinants in their mental health and well-being like employment stability, social connectedness, and environmental adversity.

In their analysis of these data, Luong and her team found that people’s psychological distress rose during the first 30–40 months (roughly 2.5–3.5 years) of drought before plateauing and then decreasing.

“People learn to cope, but the quality of life is still lower.”

“People have lower distress at the later stages of drought, but this does not necessarily mean that people will display a good mental health condition,” Luong said. “We found that when droughts go on, [they] will lead to a reduction in general life satisfaction, and despair about the future will be increased.”

Rather than indicating an improvement in overall mental health and well-being, Austin said, the alleviation of distress might be related to a developed trait known as adaptive capacity, a person’s ability to cope with adversity.

“The finding that mental health decrements tend to dissipate over time but do not completely return to baseline within this time period makes a lot of sense, conceptually, especially if the drought is ongoing,” said Susan Clayton, a professor of psychology and environmental studies at the College of Wooster in Wooster, Ohio. Clayton was not involved with this research. “People learn to cope, but the quality of life is still lower.”

“There’s been a shift in Australian policy” in the past decade regarding drought, Austin said. “It was very reactive, [but] now there’s focus on the need to plan for drought all the time, not just in the drought times but in the good times as well.” Long-term, quantitative studies like ARMHS are needed to measure the true toll that adverse environmental conditions take on rural communities, she added.

“We can develop strategies to improve well-being and therefore improve adaptive capacity and climate resilience in communities.”

“Research like this is important to share with governmental agencies in order to strengthen support for mental health treatment networks, as well as awareness of the problem,” Clayton said. “Access to mental health treatment, especially in a way that is not stigmatized, can help people to cope with these kinds of negative effects but is often difficult to obtain, especially in rural areas. Even doctors focused on physical health, and other community officials, can be trained and encouraged to ask people about their mental health and refer them to treatment options as required.”

Luong said that future analyses of ARMHS data will explore how gender, age, and income factor into drought-related mental health impacts. A more nuanced understanding of these factors can help create policies that provide the right kind of support through the entire period of mental health vulnerability and allocate often limited financial support to particularly at-risk populations.

“Our work will inform policy and strategy by providing better understanding into the drought–mental health–adaptive capacity relationship,” Luong said, “and from there we can develop strategies to improve well-being and therefore improve adaptive capacity and climate resilience in communities.”