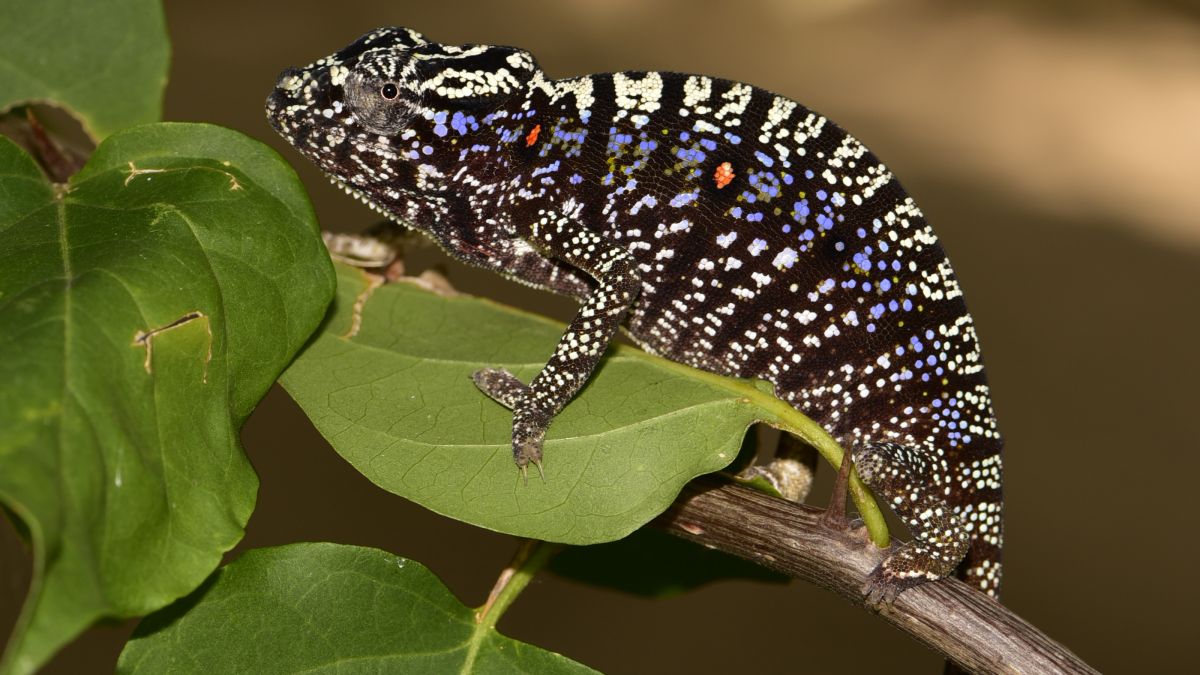 More than a century after it was last seen, a spectacularly colorful chameleon is back.

Conservationists announced the rediscovery of the Voeltzkow’s chameleon (Furcifer voeltzkowi) on Oct. 30 in the journal Salamandra. The animal, endemic to Madagascar, was last seen in 1913 — and until now, no one had ever seen a female Voeltzkow’s chameleon. The females turn out to be a striking sight. They can change colors, and at their most brilliant display a pattern of red dots and a streak of purple against a background of black and white.

“The Voeltzkow’s chameleon adds color and beauty to the planet, and reminds us that even when all seems lost, a great adventure can rekindle hope even for species we haven’t seen since Woodrow Wilson was president,” Don Church, the president of Global Wildlife Conservation, said in a statement. “Now we have so much to learn about this extraordinary reptile, including how we can best save it from extinction.”

Related: Photos of the amazing animals that call Madagascar home

Global Wildlife Conservation spearheaded the expedition as part of its Search for Lost Species program, an attempt to rediscover species that have not been observed by scientists for at least a decade. The goal is to use the discoveries to promote conservation of not only those elusive species, but of their broader habitats and ecosystems.

The Voeltzkow’s chameleon was a particularly obscure quarry. Little is known about the chameleon’s lifestyle, but its close relatives live fast and die young. For instance, the Labord’s chameleon (Furcifer labordi), another Madagascar native, hatches in November, matures, lays eggs and is dead by March. Researchers knew that Voelzkow’s chameleons would not only be small, they’d be present for only about half the year if they were like the Labord’s chameleon.

The expedition team headed into the forests of northwestern Madagascar in April 2018. At first, they didn’t have much luck.

“I thought we might have a good chance of rediscovering Voeltzkow’s chameleon, but I was surprised that it took so long and that it was so difficult,” Frank Glaw, head of the Department of Vertebrates at the Bavarian State Collection of Zoology, who led the expedition, said in a statement. “Our efforts were entirely unsuccessful during most of the trip to find it where we thought it would most likely be.”

Finally, days before the trip was to end, Angeluc Razafimanantsoa, a professional guide from Montagne d’Ambre in northern Madagascar, spotted one of the chameleons. Ultimately, the team discovered three males and 15 females.

Female Voeltzkow’s chameleons are smaller than males, the researchers discovered, growing to about 5.9 inches (150 millimeters) tip-to-tail. Males can be up to 6.5 inches (164 mm) long. Males are light green, but flash darker green stripes when angry or stressed.

When relaxed, females are green with darker green stripes and red dots along their sides. When they get stressed, those dark green stripes turn black and a purplish streak appears along the chameleon’s sides. Between the black stripes, the female chameleon’s’ skin goes white, except for their throats, which can flash a bright orange.

The chameleons were found climbing trees on the grounds of a bungalow-style hotel called Madame Chabaud in the town of Katsepy. The owner there told the researchers that the distinctive chameleons are abundant around the hotel at the peak of the wet season in January through March. Nevertheless, the researchers wrote in Salamandra, the chameleons might qualify as endangered because they live in such a small geographical region, and because their habitat has become fragmented.

Though the researchers were elated to find the Voeltzkow’s chameleons, they could not find Furcifer monoceras, another chameleon they had hoped to see on the expedition. This species is known from only one specimen, collected in 1905, and has not been recorded since.