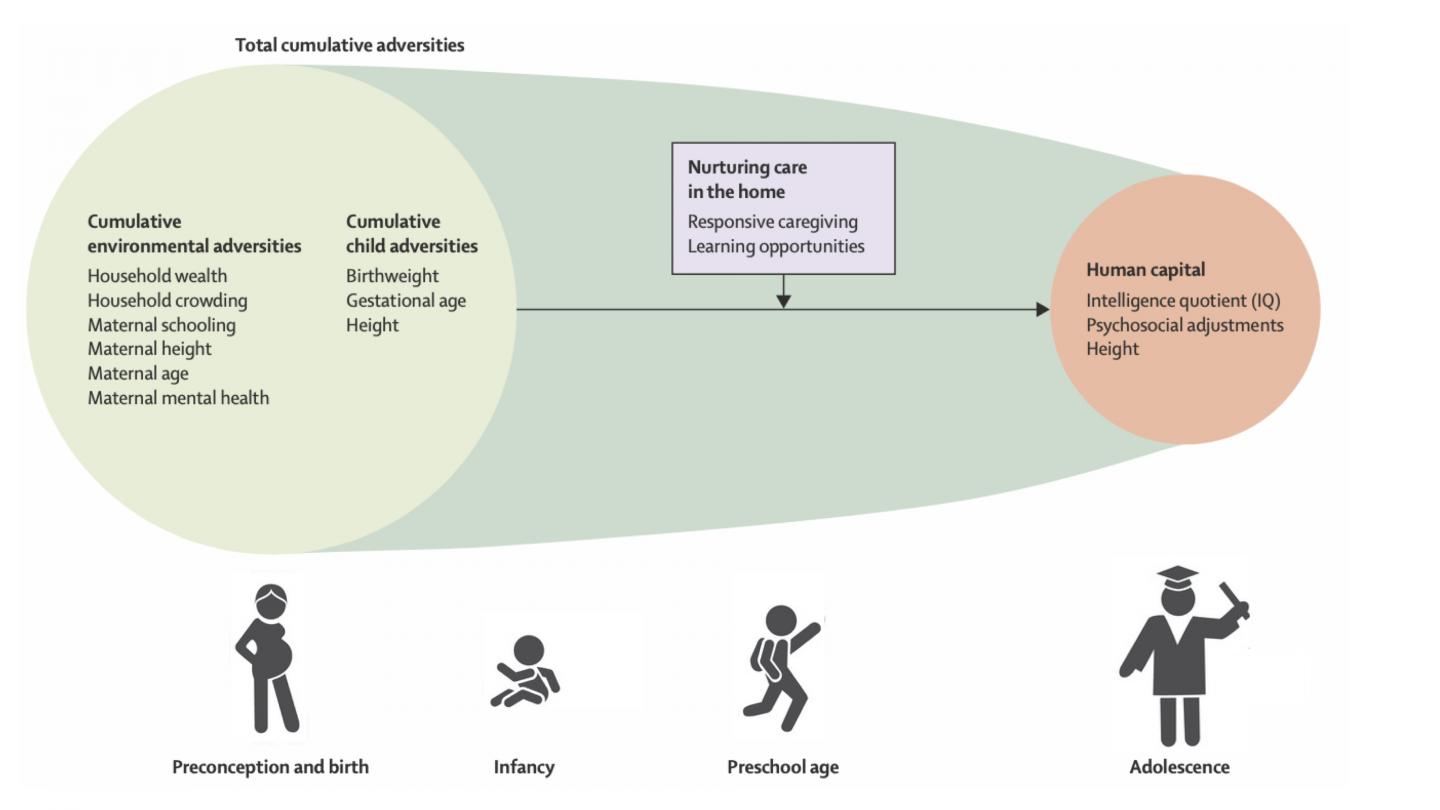 Preschoolers living in impoverished communities who have access to a nurturing home environment have significantly higher intelligence quotient (IQ) scores in adolescence compared to those raised without nurturing care. That is the finding of a new international study conducted by University of Maryland School of Medicine (UMSOM) researchers, which examined data from more than 1600 children from Brazil and South Africa who were followed from birth through their teenage years. Results were published this week in The Lancet Child & Adolescent Health journal.

The researchers analyzed data from long-running studies conducted in Brazil and South Africa to assess whether children exposed to early adversities (such as extreme poverty, low birth weight, or pre-term birth) could reach their full learning potential by experiencing responsive caregiving and opportunities to learn in their home. They found that prenatal and early life adversities matter throughout life. Adolescents who had been exposed to multiple adversities early in life had lower IQ scores, were more likely to have difficulties adjusting socially and psychologically, and achieved a lower physical height compared to adolescents exposed to fewer adversities. They also found that being raised in a nurturing environment could significantly counteract the detrimental effect of early adversities on IQ and help children achieve their full intellectual potential.

“We found that adolescents who were raised in nurturing environments had IQ scores that were on average 6 points higher than those who were not. This is a striking difference that has profound implications by increasing the intelligence of entire communities,” said study corresponding author Maureen Black, PhD, the John A Scholl and Mary Louise Scholl Endowed Professor of Pediatrics at UMSOM. “A nurturing environment also led to better growth and fewer psycho-social difficulties in adolescence, but it did not mitigate the effects of early adversities on growth and psycho-social difficulties.”

Globally, more than 250 million children younger than 5 years are at risk of not reaching their developmental potential because of adversities that co-occur early in life and accumulate with age. In the U.S, almost one in five children are raised in poverty and 15 percent do not complete high school, with higher rates for children in Black and Hispanic families. Exposing these children to a nurturing environment, whether at home or in daycare or pre-school settings, can lead to cognitive benefits that last into adolescence and beyond.

“I think our findings could apply to communities here in the U.S. where children are hungry, living in poverty or lacking in access to medical care,” Dr. Black said.

Added study lead author Angela Trude, PhD, a post-doctoral fellow in the UMSOM Department of Pediatrics, “Parents want to provide nurturing environments and we need to help them.” She said this includes interacting with young children in a positive way such as reading children’s books from the library, singing songs together, and playing games with numbers and letters. Children who engage in age-appropriate chores with adult supervision like picking up toys and clearing the table gain skills and feel good about helping.

“Get children involved in friendly activities as much as possible rather than parking them in front of a screen,” Dr. Black said. “Children love to learn and in a nurturing environment they can grow into adolescents and adults with the abilities to care for themselves, their families, and their communities.”

The research was funded by the Bill & Melinda Gates Foundation.

“As the world continues to suffer through a global pandemic, we must not let our youngest children fall through the cracks,” said E. Albert Reece, MD, PhD, MBA, Executive Vice President for Medical Affairs, UM Baltimore, and the John Z. and Akiko K. Bowers Distinguished Professor and Dean, University of Maryland School of Medicine. “This research highlights the importance of nurturing caregivers, both at home and at school to help children lead more productive lives as adults.”

About the University of Maryland School of Medicine