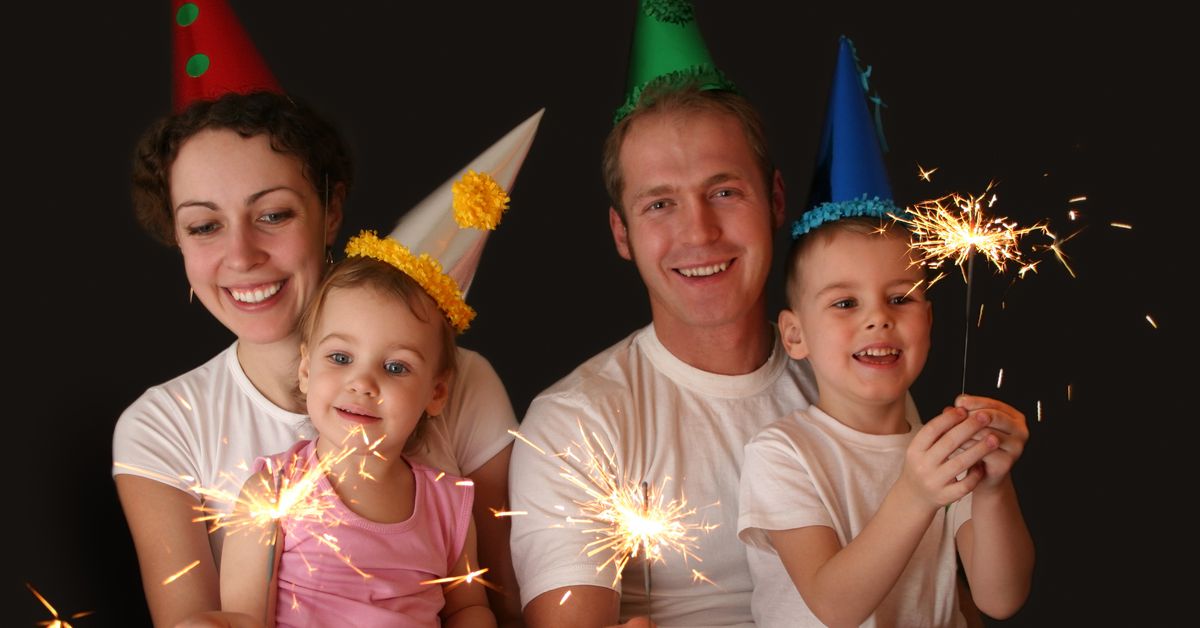 You know what’s even better than sparklers? The spark of hope in their eyes. (Deposit Photos/)

For the first time in more than a century, New York City’s Times Square will be nearly empty on New Year’s Eve. No chorus of cheap noisemakers. No awkward selfies with the Naked Cowboy. No families swapping hot chocolate to stay warm and awake until the ball drops.

This year being in crowded places is out of the question, but if you’re planning to stay in with your closest circle, you can still recreate some of the midnight suspense in the safety of your home. Tuning into a live stream is probably the easiest way, whether it be in Times Square or a First Night celebration in your local city—but you can also go all the way with a DIY ball drop, music show, and more.

Here are five of the most entertaining and easy-to-put-together ideas the internet has to offer.

Make your own classic sparkly ball or piñata

If you haven’t packed away your Christmas lights yet, here’s another reason to procrastinate. Pull out a few strands and raid your recyclables to build a quick, smash-proof New Year’s ball. The simple craft, courtesy of the Hallmark Channel, should take under an hour to assemble. A power drill will speed up the process, but you can use a simple hammer and nail if the young ones are begging to help out.

To add a special pop to your countdown, give HGTV’s confetti pinata a spin. A warning, though—this one involves a lot of tape, so if you’re letting kids partake, you might want to set some boundaries to avoid a sticky mess. You can fill the final creation with iridescent film, like in the video, or something more silly such as homemade Silly Putty or growing dinosaurs.

Let the kids do their own DJ set

You don’t need to be as talented as the Jackson Five to make music as a family. With apps like Crayola DJ and websites like BeastBox, kids can spin their own tunes and learn something about pitch, rhythm, and personal expression while they’re at it. It beats listening to the same lonely-trumpet version of “Auld Lang Syne” year after year. If you’ve got more of a singing household, try a karaoke software like Kanto Player or a TikTok challenge that really spans the ages.

We stole this idea from the town of Lebanon, Pennsylvania, home to the annual New Year’s bologna drop. You’ll never top the 200-pound meat that was suspended on a crane over revelers in 2018, so focus on quality over quantity with your chosen charcuterie, and turn your 2021 countdown into a cooking spree. Depending on what your local butcher or deli has to offer, you might want to fry the bologna and drop it on your family as a pile of sandwiches.

Celebrate with flame-free and pet-approved fireworks

Setting off fireworks at home can be dangerous and even illegal. This sticker-and-ribbon version from Kids Craft Room is a reusable DIY that swaps pyrotechnics for a more gentle colorful display. Plus, a papercut is the worst injury you’ll get making it. If you have skittish pets, know that they’ll probably be grateful, too.

A New Year’s Eve party may be customary in the US, but different cultures celebrate the holiday in special ways—and not always at the same time of the year. Take a tour of some international traditions, including Japanese soba noodles, Ethiopian flower arrangements, and the Bulgarian ritual of survakane, where kids (gently) beat adults with sticks to usher in good luck. Share the history of each culture as you explore so you put these practices in the context of the people who’ve enjoyed them for decades.