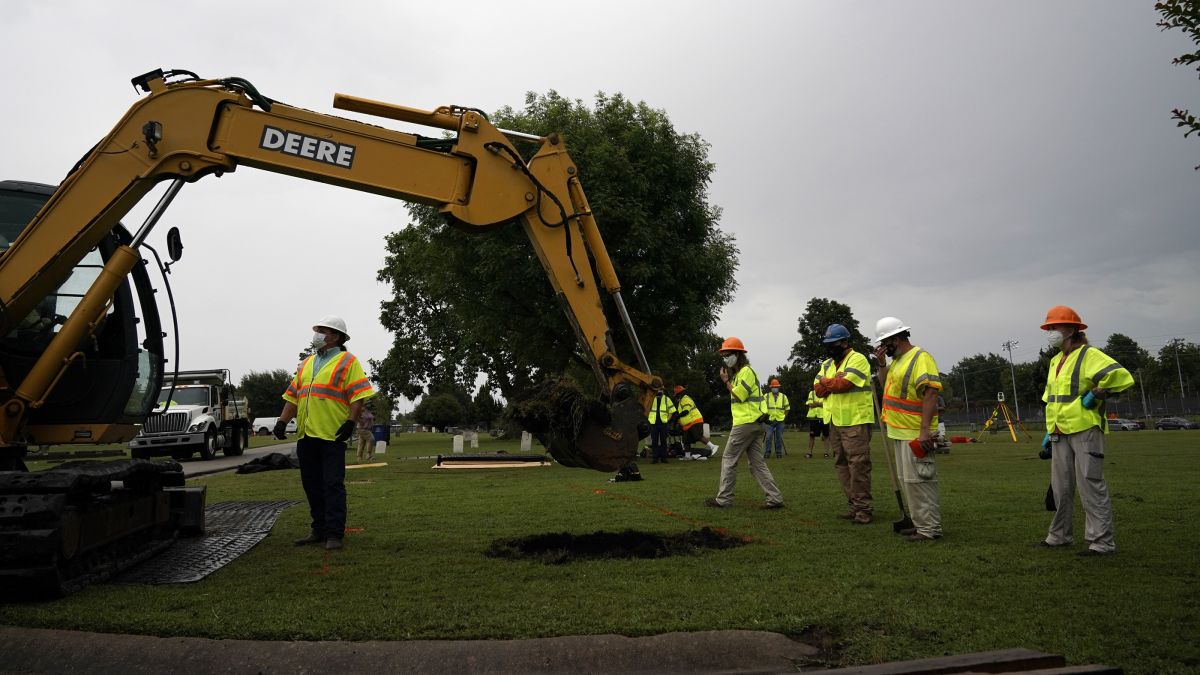 More than 20 years after she started to unearth the truth about the 1921 race massacre in Tulsa, Oklahoma, Phoebe Stubblefield heard a shout outside the trench in the city’s Oaklawn Cemetery where she was digging.

It came from her colleagues working nearby, who had just uncovered the first two of what would turn out to be roughly a dozen coffins in an unmarked mass grave, which may hold the remains of Black victims of the massacre, estimated to have killed up to 300 mostly Black people.

“My dominant emotion and all of this is gratitude,” Stubblefield told Live Science. “To finally find them … I wasn’t surprised, but I was pleased, in the way that your suspicions bear out with testing.”

Related: Photos: Evidence of a legendary massacre in Alaska

Stubblefield, a forensic anthropologist at the University of Florida who often investigates human remains found by law enforcement agencies, was a member of the original commission created by the Oklahoma state legislature in 1997 to investigate the 1921 Tulsa massacre.The commission produced a final report in 2001 that recommended, among other things, that the state should pay reparations to the descendants of Black victims and survivors of the massacre; but many of its recommendations were ignored in the eventual statute enacted by the Oklahoma Legislature. Although that statute acknowledged the state’s “moral responsibility” for the race riot and affirmed that no race had the right to subordinate any other, it did not enact reparations.

Now, the significance of the 1921 massacre has been heightened by a second commission investigating the events of the massacre ahead of its centenary next year.

Almost a year ago, archaeologists found signs that some victims may have been buried in an unmarked mass grave in the “Sexton” area of Oaklawn Cemetery; but excavations in July found no graves there, Live Science previously reported.

Last week, however, excavation crews unearthed at least 12 unmarked coffins, and possibly more, in a nearby part of the cemetery known as “Potters’ Field.”

It’s not yet known whether the coffins hold the remains of Black victims of the 1921 massacre, but there are compelling reasons to believe that they do, said Kary Stackelbeck, the Oklahoma state archaeologist who is leading the current excavations.

“The mass grave is located in the African-American section of the Potter’s Field, which was established during the Jim Crow era,” Stackelbeck told Live Science in an email. Jim Crow was the system of racial caste segregation in place in parts of the U.S. between 1877 and the mid-1960s, according to Ferris State University.

That location corresponds with witness accounts and documentary evidence, including a 1921 newspaper report that the city would bury “the bodies of 18 Negroes, killed in the rioting” at that site, she said.

“I felt a sense of relief and excitement,” Stackelbeck said. “We were anticipating finding individual grave shafts of perhaps 18 [people], and we ended up finding a mass grave that could contain many more than that number.”

The archaeologists expect the remains will be in “reasonable, but not excellent” condition after almost 100 years in the ground, she said. “We expect they can be exhumed, but we will have to practice careful excavation and take special measures to ensure that they remain sufficiently intact to allow for specialized analysis.”

The commission will now go through a legal process to exhume the remains, which could take several months. They’ll be followed by a series of forensic tests, led by Stubblefield, to try to determine their likely sex, age at death, height and ancestry.

Stubblefield said the ancestry of a person — such as if they are of African or European descent — can typically be established by examining the facial structure of the skull. Such examinations can look at the shapes of the eye sockets, the nasal aperture, and the bones of the jaw.

The prosperous Tulsa neighborhood of Greenwood was one of the most prosperous African-American communities in the U.S. in the earlier 20th century, when it was popularly known as the “Black Wall Street.”

But the prosperity of Greenwood and the “Red Summer” of 1919, during which white supremacists violently attacked Black people in several U.S. cities after the end of World War I, may have led to conflicts with the majority white population of the city.

On May 31, 1921, the arrest of a young Black man for allegedly assaulting a young white woman sparked widespread rioting, followed by deadly shootings between rival racial groups. By the next day, a white mob had massacred hundreds of Black people and deliberately burned down the Greenwood neighborhood. Some witnesses said even private planes were used in the attacks.

The Tulsa race massacre wasn’t officially recognized by the state until 2001, and historians have claimed accounts of the violence were suppressed.

But in recent decades, Oklahoma and the city of Tulsa have tried to better come to terms with this brutal part of their history. It’s thought that most people who were alive at the time have now passed away; one of the last known survivors, the psychologist and professor Olivia Juliette Hooker, died in 2018 at the age of 103.