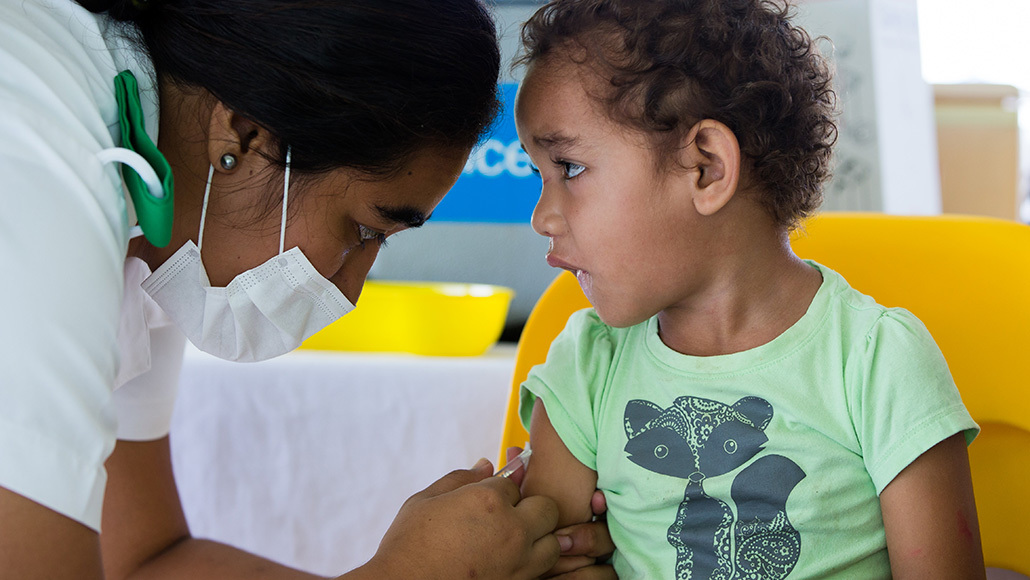 Measles has come back with a vengeance around the world in recent years, wiping out steep declines in cases seen since the start of the new century.

“This is a really important setback and a tragic setback, because we’ve had a safe and effective measles vaccine since the early 1960s,” says William Moss, an infectious disease epidemiologist at the Johns Hopkins Bloomberg School of Public Health who was not involved in the report. “We had made enormous progress.”

The measles vaccine is a public health superstar, with the recommended two doses about 97 percent effective at preventing the disease and one dose about 93 percent effective. To stop outbreaks, around 95 percent of a community must be vaccinated (SN: 4/15/19).

Overall, measles is infecting more people because of stalled progress in increasing immunization coverage, says coauthor Natasha Crowcroft, a senior advisor for WHO’s Measles and Rubella Control in Geneva. Globally, estimated coverage with the first dose of a measles vaccine rose from 72 to 84 percent from 2000 to 2010, but has since leveled off to around 84 to 85 percent.

This “is high enough to slow measles or interrupt it for periods of time, but it inevitably leads to the accumulation of susceptible children, and eventually this flares up into outbreaks,” says Crowcroft. In 2019, 19.8 million infants did not receive the first dose of a measles vaccine. The reasons for low coverage vary by region, but weak primary health care systems and access are major factors, she says.

Large outbreaks in nine countries — Central African Republic, Congo, Georgia, Kazakhstan, Madagascar, North Macedonia, Samoa, Tonga and Ukraine — were responsible for 73 percent of the reported 2019 cases. The study highlights issues that befell a few of these nations. Congo and Madagascar have many children vulnerable to measles because of very low vaccination coverage (SN: 4/24/19). More people in Samoa shied away from the measles vaccine after two babies died because of a medical error made when they were immunized in 2018. In Ukraine, lack of confidence in vaccines by health care workers is one reason fewer people there are vaccinated (SN: 5/21/19).

The WHO groups the world into six regions; all of them struggled with measles. The Americas had 19,244 reported measles cases in 2019, with major outbreaks in Brazil and the United States, which last year nearly lost its claim to having eliminated measles (SN: 12/16/19). There were 618,595 people reported to have measles in the African region in 2019, and 105,755 in the European region.

In 2020, the COVID-19 pandemic may add to the challenges ahead in reigning in measles. “Given all the issues that led to 2019, we are not starting from a strong base,” says Crowcroft. Disruptions to immunization programs could produce more gaps in immunity to measles, heightening the risk of outbreaks. The economic hardship brought on by the pandemic has also increased malnutrition, she says, which makes the disease worse; vitamin A deficiency in particular is associated with severe measles. “These issues tend to cluster in the same communities, exacerbating the total effect and increasing inequity.”

Increasing the number of children who receive the recommended two doses of measles vaccine and implementing catch-up vaccination for those who miss shots are a few of the actions needed to regain control of measles, Crowcroft and her coauthors write. “It takes a lot of careful work and support at multiple levels in a country to create a strong immunization program,” she says.

Eventually, it may be possible to expand vaccination around the world with the help of a vaccine patch (SN: 6/28/17). The single-dose patches have an array of tiny “needles” that are filled or coated with the vaccine; in some cases, the needles dissolve into the skin. Animal studies have found the patches to be effective as a measles vaccine delivery device. The patches don’t have the same cold temperature requirements for storage that the syringe-based measles vaccine does, says Moss, and the adhesive-backed patches can be administered with minimal training.

“It’s still a number of years away,” he says. But being able to stick a patch on a child and immunize them “is going to be perhaps transformative and really help us boost measles vaccine coverage.”