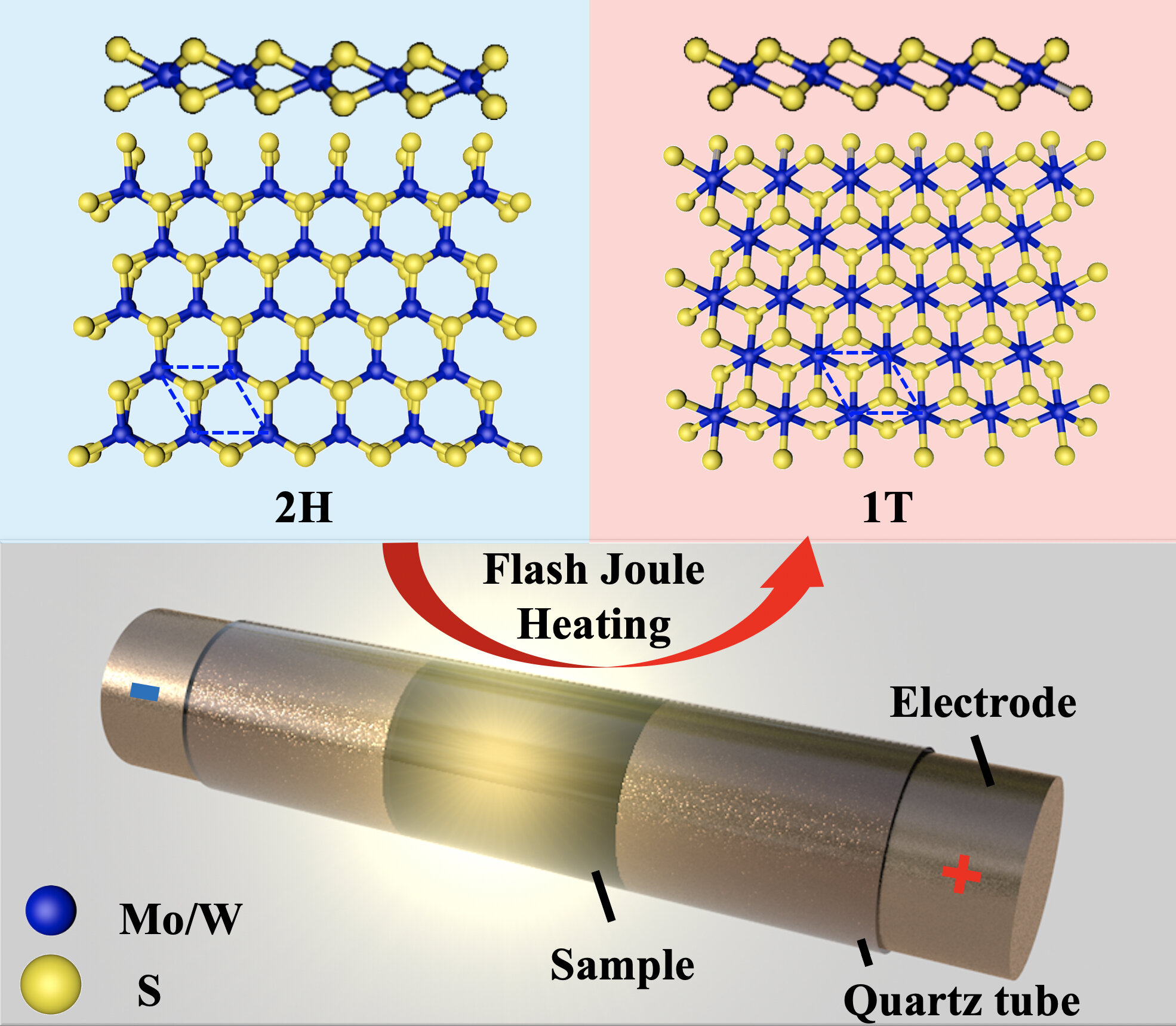 Rice University scientists have extended their technique to produce graphene in a flash to tailor the properties of other 2-D materials.

The labs of chemist James Tour and materials theorist Boris Yakobson reported in the American Chemical Society’s ACS Nano they have successfully “flashed” bulk amounts of 2-D dichalcogenides, changing them from semiconductors to metallics.

Such materials are valuable for electronics, catalysis and as lubricants, among other applications.

“This rapid process permits us to make an entirely new class of highly valued materials in large scale and without the use of solvents or water,” Tour said.

Two-dimensional dichalcogenides look like hexagonal graphene from above, but viewing them from an angle reveals a sandwichlike structure. In molybdenum disulfide, for instance, a single plane of molybdenum atoms sits between similar, but offset, planes of sulfur.

Making each material in its metallic phase (known as 1T) previously required far more complex processes, according to the researchers. Even then, the products were known to be unstable in ambient conditions. Flash Joule heating appears to solve that problem, producing metastable dichalcogenides in a thousandth of a second.

Powdered, commercially available dichalcogenides mixed with carbon black or tungsten powder to increase their conductivity were placed in a ceramic tube capped with electrodes and flashed with more than 1,350 amps of power for a fraction of a second, then rapidly cooled. With the tube under vacuum, extraneous gases were vented, leaving mostly pure metallics to be harvested.

According to the Yakobson team’s calculations, the large energy input forces structural defects to appear in the materials’ crystal lattices, adding negative charges that make 1T the thermodynamically preferred phase.

“It is an interesting fast-forward incarnation of Le Chatelier’s principle: Under voltage, the material changes to a more conducting 1T phase, to counteract/reduce the applied electric fields,” said co-author Ksenia Bets, a researcher in the Yakobson group. “Our detailed computations reveal that the kinetic path is indirect: The sublimating sulfur creates a vacancy-rich lattice that energetically prefers a 1T structure.”

The fact that conditions and additives can influence the final product should lead to a systematic study about possible variations, Tour said.