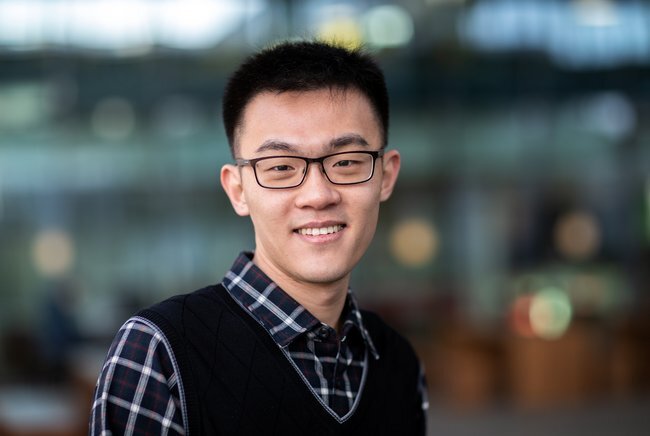 Catalytic conversion of molecules with one carbon atom such as methane, carbon dioxide (CO2), methanol (CH3OH) and others into higher-value chemicals is of major importance for a viable and sustainable chemical industry. Ph.D. candidate Miao Yu, of the TU/e Department of Chemical Engineering and Chemistry, explored the synthesis of an alternative building block, methanethiol (CH3SH)—the sulfur analog of CH3OH—from cheap and abundant feedstock as well as the further conversion of CH3SH into olefins, which are widely used for making plastics. The development of catalysts for both chemical reaction steps lays the foundation for novel industrial chemical processes. Yu will defend his Ph.D. thesis on 2 December 2020.

In addition to its capacity to be converted into olefins, CH3SH is used as an important raw material for sulfur-containing products in the food industry. Currently, it is produced by thiolation of CH3OH, a process that makes it too expensive for large-scale production. Direct synthesis of CH3SH from simple chemicals such as carbon monoxide and hydrogen sulfide was already attempted 30 years ago. This led to the development of a class of alkali-promoted molybdenum sulfide (K/MoS2) catalysts which, despite their promise, has not yet made the direct synthesis process competitive enough compared to the conventional methanol route.

For the next step, Yu explored the reaction mechanism of CH3SH synthesis in detail by advanced spectroscopic and microscopic techniques. These meticulous studies yielded a surprising outcome: instead of potassium (K), cesium (Cs) shows a much better performance in promoting the activity of the MoS2 catalysts. Moreover, it turned out that the MoS2 component is not needed at all—alkali sulfides alone can catalyze CH3SH synthesis. These insights make it possible to develop new catalysts that are much more cost effective, bringing us one step closer to large-scale CH3SH synthesis.

Now that there are prospects for CH3SH to become a cheap commodity chemical, it is worthwhile to explore the conversion of this simple molecule to ethylene, which is the main building block for polyethylene. To this end, it is necessary to make carbon-carbon bonds. Given the analogy between CH3OH and CH3SH, Yu attempted to mimic the already industrialized methanol-to-olefins (MTO) process. A major discovery was that particular small-pore zeolites have the capacity to catalyze the conversion of CH3SH to ethylene with high selectivity in a novel chemical process called the “methanethiol-to-olefins (MtTO) reaction.”

With his research, Yu shows the potential of CH3SH to become a novel C1 feedstock for the chemical industry. Indirectly, this can contribute to decreasing greenhouse gas emissions, because it is possible to use CO2 can be used as a C1 feedstock as well. A next challenge is the direct synthesis of methanethiol from CO2 to intensify the overall process.

Provided by
Eindhoven University of Technology