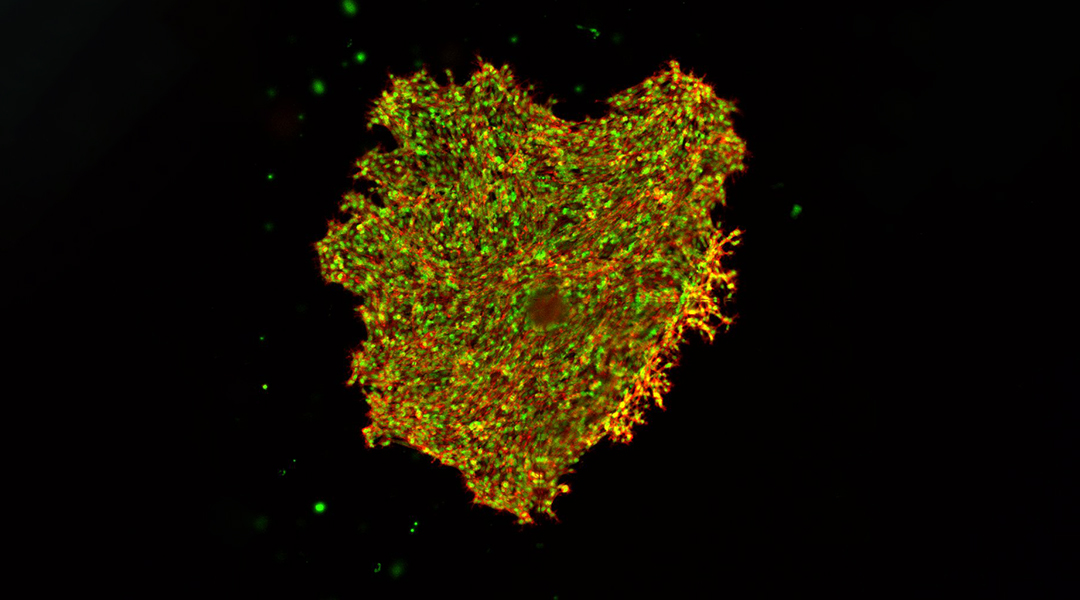 Researchers engineer a hydrogel that recapitulates biophysical changes in the tissues surrounding tumors to investigate how tissue stiffness impacts the mobility of invasive and non-invasive cancer cells.

Interactions between cancer cells with their microenvironment, in particular, mechanical forces encountered by the cells, influence their behaviour, and ultimately play an important role in the spread of cancer to other tissues. To investigate how the physical characteristics of tissue microenvironments affect disease progression in breast cancers, researchers grow cancer cells in a three-dimensional hydrogel matrix and monitor their development.

The hydrogel mimics the physiological characteristics of tissues around cancer cells in the human body, tissues that are reported to increase in stiffness as disease progresses. Unlike other artificial extracellular matrix materials used to study cell behaviour, this hydrogel allows the matrix stiffness to be fine-tuned without changing other properties, and so reproduces conditions more similarly to the local tissue microenvironments in the body.

“We targeted the construction of materials that can produce a broad range of mechanical properties—like soft and hard tissue mimics—by changing the amount of crosslinking between the molecules, without affecting other properties such as porosity or density. The stiffening process and the material are extremely similar to those of natural tissues,” says Singapore University of Technology and Design’s Professor Javier Fernandez and leader of the research team.

The study published in Advanced Functional Materials is based on experimental work by graduate student Jyothsna Vasudevan, and a collaboration with Professor Chwee Teck Lim of National University of Singapore.

To maintain consistency in other parameters when tuning the stiffness of the matrix, the researchers used GelMA, a collagen-based light-responsive hydrogel. When exposed to ultraviolet light, the modified collagen molecules in solution bind to each other forming a scaffold.

“The system allows excellent control in both the mechanical characteristics and geometry. The latter is controlled by selectively illuminating certain areas of the three-dimensional tissue mimics for them to harden, in a process known as photolithography,” Fernandez says.

Using hydrogels that mimic healthy and cancerous breast tissue, the researchers monitored the movement of embedded cancer cells over several days, to observe how they interacted with their surroundings.

The team characterized a range of complex cell migration patterns observed in invasive and non-invasive cell models of breast cancer. They observed that the invasive cancer cells were generally more mobile than the non-invasive cells. More importantly, even the more actively moving invasive cancer cells migrated less and more slowly when the hydrogels were engineered to be stiffer, despite the density and pore size remaining unchanged.

This culture system allows researchers to isolate the effects of mechanical forces from other biological factors, to investigate its role in shaping cellular behaviour and influencing disease progression.

“We show how they express some very complex behaviors that are extremely difficult to observe in their extraordinarily complex and random native environment,” says Fernandez.

This versatile material can be finely tuned to mimic different physical environments and be used to study fundamental cellular behaviour in a range of tissue conditions.

“Controlling the extent of modification of the collagen molecules, with the amount of crosslinking moieties, the mechanical properties of that scaffold can be very finely tuned, and the environment can be adapted to mimic the mechanical characteristics of a myriad of different human tissues, from bone to brain,” says Fernandez.