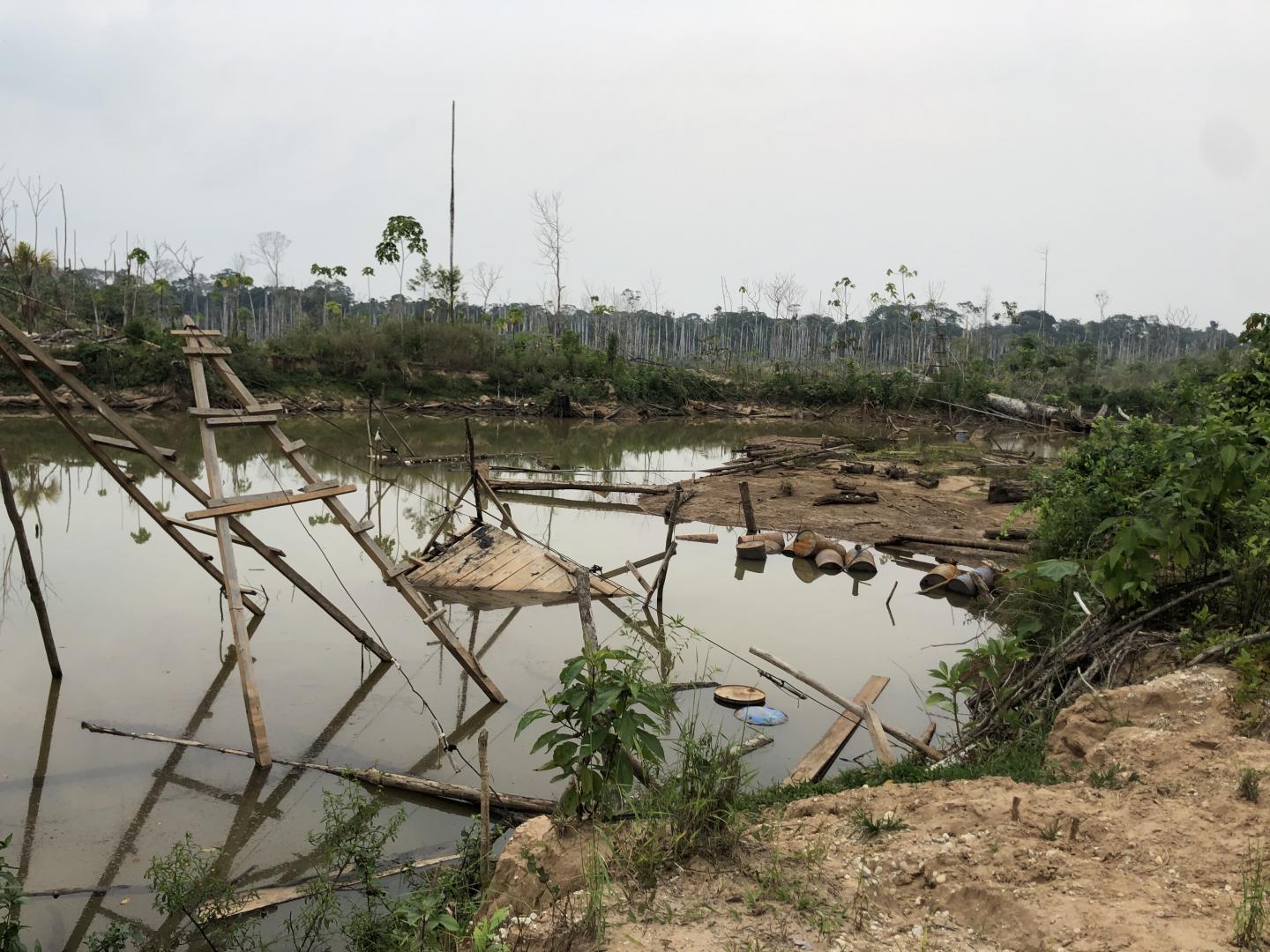 DURHAM, N.C. – The proliferation of pits and ponds created in recent years by miners digging for small deposits of alluvial gold in Peru’s Amazon has dramatically altered the landscape and increased the risk of mercury exposure for indigenous communities and wildlife, a new study shows.

“In heavily mined watersheds, there’s been a 670% increase in the extent of ponds across the landscape since 1985. These ponds are almost entirely artificial lakes created as thousands of former mining pits fill in with rainwater and groundwater over time,” said Simon Topp, a doctoral student in geological sciences at the University of North Carolina at Chapel Hill, who co-led the study.

Landscapes formerly dominated by forests are now increasingly dotted by these small lakes, which, the study finds, provide low-oxygen conditions in which submerged mercury – a toxic leftover from the gold mining process – can be converted by microbial activity into an even more toxic form of the element, called methylmercury, at net rates 5-to-7 times greater than in rivers.

“Methylmercury poses especially high risks for humans and large predators because it bioaccumulates in body tissue as it moves up the food chain. That’s particularly concerning given the high biodiversity and the large number of indigenous populations that live in the Peruvian Amazon,” said Jacqueline Gerson, a doctoral student in ecology at Duke University, who also co-led the study.

These heightened risks likely also occur in other locations where unregulated artisanal small-scale gold mining takes place, including Asia, sub-Saharan Africa and other parts of South America, she said.

Topp, Gerson and their colleagues published their peer-reviewed study Nov. 27 in Science Advances.

Artisanal gold miners use mercury, a potent neurotoxin, to separate their gold ore from soil and sediments, often without adequate safety precautions to protect themselves or the environment.

Mercury poisoning can cause a wide range of health impacts, including tremors, muscle weakness, vision and hearing impairments, and loss of coordination and balance. In severe cases, it can lead to birth defects or death.

Some of the mercury used by the miners is burned off into the air or spilled into nearby rivers, creating far-reaching environmental and human health risks that have been well documented in past studies. The new study is the first to document how the mining has altered the landscape and simultaneously amplified the risks of mercury poisoning through the creation of ponds and the microbial processing of mercury into methylmercury that occurs there.

To conduct the study, the scientists collected water and sediment samples at sites upstream and downstream of artisanal gold mining sites along Peru’s Madre de Dios River, its tributaries, surrounding lakes, and mining ponds during the dry season in July and August of 2019. They measured each sample for total mercury content and for the proportion of that mercury that was in the more toxic form of methylmercury.

By combining these measurements with more than three decades of high-resolution satellite data from the region, they were able to determine the extent of artificial ponding and mercury contamination at each site and identify causal links.

“You can clearly see that the increase in artificial lakes and ponds in heavily mined areas accelerated after 2008, when gold prices dramatically increased along with mining activity,” Topp said. By contrast, the total surface area of ponds in areas without heavy mining increased by an average of only 20% over the entire study period.

“We expect that this trend, and the environmental and human health risks it causes, will continue as long as gold prices remain high and artisanal small-scale gold mining is a profitable activity,” he said.

Co-authors of the new study were John Gardner, Xiao Yang and Tamlin Pavelsky of UNC-CH; Emily Bernhardt of Duke; and Claudia Vega and Luis Fernandez of Wake Forest University’s Center for Amazonian Scientific Innovation in Peru.