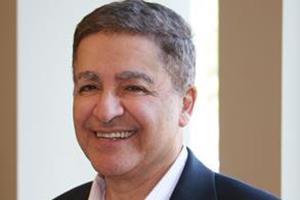 This summer, when bars and restaurants and stores began to reopen across the United States, people headed out despite the continuing threat of COVID-19.

As a result, many areas, including the St. Louis region, saw increases in cases in July.

Using mathematical modeling, new interdisciplinary research from the lab of Arye Nehorai, the Eugene & Martha Lohman Professor of Electrical Engineering in the Preston M. Green Department of Electrical & Systems Engineering at Washington University in St. Louis, determines the best course of action when it comes to walking the line between economic stability and the best possible health outcomes.

The group — which also includes David Schwartzman, a business economics PhD candidate at Olin Business School, and Uri Goldsztejn, a PhD candidate in biomedical engineering at the McKelvey School of Engineering — published their findings Dec. 22 in PLOS ONE.

The model indicates that of the scenarios they consider, communities could maximize economic productivity and minimize disease transmission if, until a vaccine were readily available, seniors mostly remained at home while younger people gradually returned to the workforce.

“We have developed a predictive model for COVID-19 that considers, for the first time, its intercoupled effect on both economic and health outcomes for different quarantine policies,” Nehorai said. “You can have an optimal quarantine policy that minimizes the effect both on health and on the economy.”

The work was an expanded version of a Susceptible, Exposed, Infectious, Recovered (SEIR) model, a commonly used mathematical tool for predicting the spread of infections. This dynamic model allows for people to be moved between groups known as compartments, and for each compartment to influence the other in turn.

At their most basic, these models divide the population into four compartments: Those who are susceptible, exposed, infectious and recovered. In an innovation to this traditional model, Nehorai’s team included infected but asymptomatic people as well, taking into account the most up-to-date understanding of how transmission may work differently between them as well as how their behaviors might differ from people with symptoms. This turned out to be highly influential in the model’s outcomes.

People were then divided into different “sub-compartments,” for example age (seniors are those older than 60), or by productivity. This was a measure of a person’s ability to work from home in the case of quarantine measures. To do this, they looked at college degrees as a proxy for who could continue to work during a period of quarantine.

Then they got to work, developing equations which modeled the ways in which people moved from one compartment to another. Movement was affected by policy as well as the decisions an individual made.

Interestingly, the model included a dynamic mortality rate – one that shrunk over time. “We had a mortality rate that accounted for improvements in medical knowledge over time,” said Uri Goldsztejn, a PhD candidate in biomedical engineering. “And we see that now; mortality rates have gone down.”

“For example,” Goldsztejn said, “if the economy is decreasing, there is more incentive to leave quarantine,” which might show up in the model as people moving from the isolated compartment to the susceptible compartment. On the other hand, moving from infectious to recovered was based less on a person’s actions and can be better determined by recovery or mortality rates. Additionally, the researchers modeled the mortality rate as decreasing over time, due to medical knowledge about how to treat COVID-19 becoming better over time.

The team looked at three scenarios, according to Schwartzman. In all three scenarios, the given timeline was 76 weeks — at which time it assumed a vaccine would be available — and seniors remained mostly quarantined until then.

If, after the curve was flattened, isolation measures were slowly lifted for younger people.

“The third scenario is the case which was the best in terms of economic damage and health outcomes,” he said. “Because in the rapid relaxation scenario, there was another disease spread and restrictions would be reinstated.”

Specifically, they found in the first scenario, there are 235,724 deaths and the economy shrinks by 34%.

In the second scenario, where there was a rapid relaxation of isolation measures, a second outbreak occurs for a total of 525,558 deaths, and the economy shrinks by 32.2%.

“We wanted to show there is a tradeoff,” Nehorai said. “And we wanted to find, mathematically, where is the sweet spot?” As with so many things, the “sweet spot” was not at either extreme — total lockdown or carrying on as if there was no virus.

Another key finding was one no one should be surprised to hear: “People’s’ sensitivity to contagiousness is related to the precautions they take,” Nehorai said. “It’s still critical to use precautions — masks, social distancing, avoiding crowds and washing hands.”