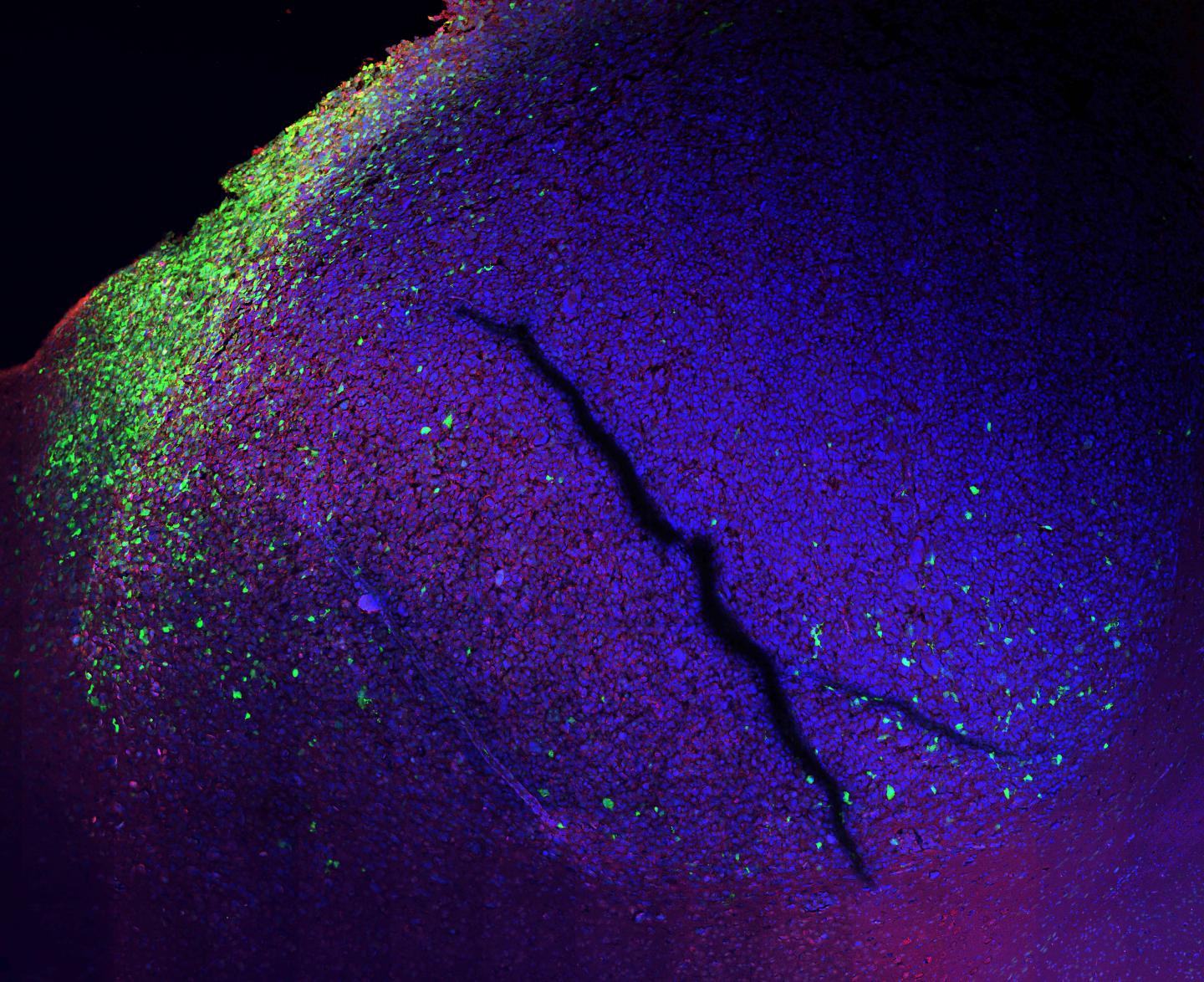 Glioblastoma is the most common malignant brain tumor in adults. Roughly five in every 100,000 people develop this type of cancer each year. The diagnosis amounts to a death sentence: Even after surgical resection followed by radiation and chemotherapy, the glioblastoma will kill the patient in a few months. This is because the tumor invariably returns after treatment, and in a more aggressive form than before.

Researchers investigating glioblastoma tissue always find immune cells inside the tumor. They have therefore long suspected that these cells strengthen the tumor, instead of fighting it. A team led by Dr. Gaetano Gargiulo at the Max Delbrück Center for Molecular Medicine in the Helmholtz Association (MDC) has now supplied direct evidence of this. “We developed a new technology which allows us to visualize, on a molecular level, how the innate immune cells end up defending the tumor cells rather than body” says Gargiulo.

The researchers generated/created molecular reporters that produce fluorescence in a cell if that cell is running complex programs, such as the kind that changes the cell identity. They have published their findings in the journal Cancer Discovery. The lead authors are Matthias Jürgen Schmitt, Carlos Company, and Yuliia Dramaretska – all doctoral students in Gargiulo’s Molecular Oncology Lab. The group collaborated with scientists at the Netherlands Cancer Institute, the Ludwig-Maximilians-Universität München, and the Spanish National Cancer Research Center.

Glioblastoma, previously known as glioblastoma multiforme, is a highly heterogeneous tumor. Drugs that are used successfully to treat some forms of bowel or breast cancer are powerless against glioblastoma. “This is firstly because most cancer drugs can’t get across the blood-brain barrier,” says Gargiulo. The blood-brain barrier is a complex set of cellular and molecular channels that regulates the access of substances to the brain tissue from circulating blood. It stops substances that don’t belong in the central nervous system from entering the brain via the capillaries. This is certainly one reason why only one drug could be approved so far for chemotherapy in glioblastoma patients and it eventually stops working pretty soon.

A basis for developing new medicines

Secondly, not all cancer cells are alike. The cells that give rise to glioblastoma are divided into multiple molecular subtypes. The composition changes over time. This is especially true with a recurrence – when a tumor returns after treatment. In these cases, the cells frequently transition to the most aggressive of the subtypes, which is deadlier than the others. “A better understanding of the glioblastoma subtype identities, and of what triggers their changes, could be a guide for developing new and more effective therapies,” says Matthias Schmitt.

This requires researchers to have an accurate understanding of the tumor’s biology – how it regulates its growth and how it interacts with nearby cells. Gargiulo and his team have now found the tool that allows them to comprehend these cellular processes. “Within the tumor cells’ genome, we’ve identified the regulators that program each subtype signature,” says Yuliia Dramaretska. “We then turned these short DNA segments into molecular reporters that fluoresce when the cells change.” They also show what triggered the change – e.g., immune cells, drugs, or ionizing radiation.

“The molecular reporters can now help us work out how to stop the immune cells from making the tumor cells more aggressive,” says Gargiulo, explaining the future research plans. “Perhaps we can also encourage them to recruit other immune cells that will help them fight the tumor.”

The technology has already been patented, and the plan is to set up a spin-off that will further develop it. “It’s not only useful with glioblastoma,” says Carlos Company. “It is potentially applicable to many other biological systems.” One very contemporary use that Gargiulo mentions is for research into the COVID-19. The MDC scientists plan to use it to develop tests that show, at a very early stage, whether the virus is attacking the lung tissue. They could investigate drug combinations to see whether these stop the pathogen from replicating in the cells and mount an anti-viral response. The method could also provide insights into how and why drugs work against COVID-19.