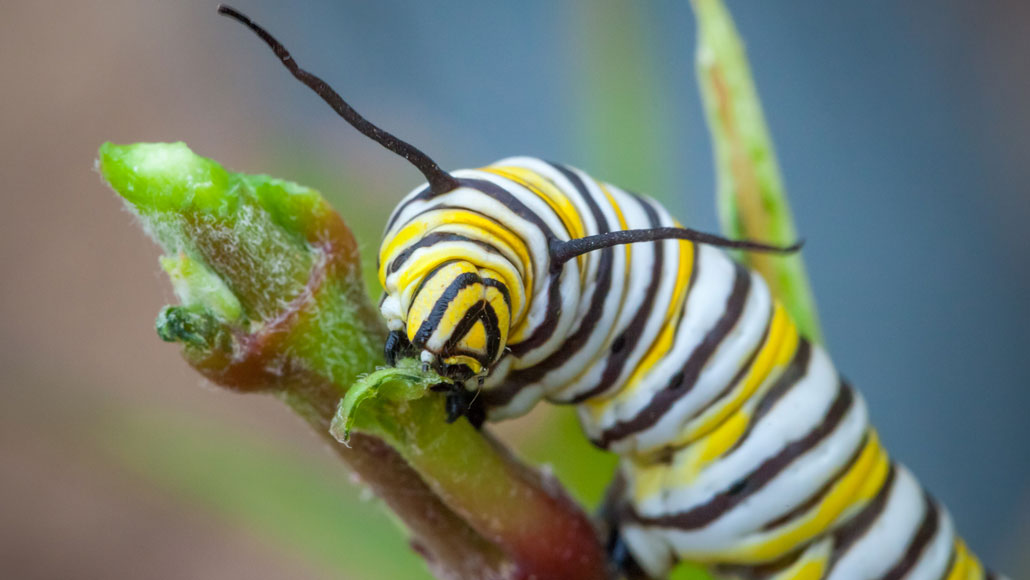 When food and space get scarce, competition can bring out the worst in monarch caterpillars.

In the laboratory, researchers watched as roaming caterpillars looking for a hard-to-find meal started head-butting and lunging at fellow caterpillars munching on a milkweed leaf. That aggressive behavior is apparently meant to disrupt the feeding insects and help the instigators score dinner, biologist and neuroscientist Alex Keene and colleagues report online November 19 in iScience.

Keene usually studies fruit flies and cavefish, but he decided to adapt his laboratory to study monarchs after a chance observation. “My wife pointed out in the backyard that these two monarch caterpillars were fighting with each other,” says Keene, of Florida Atlantic University in Jupiter. “I went on YouTube, and there were videos of this behavior,” he says, but for monarchs, “it wasn’t documented anywhere in the scientific literature.” Other types of caterpillars have shown similar aggressive behavior in other settings.

Going from a self-proclaimed “simple fly biologist” to monarch researcher, however, was a challenge. Not only did Hurricane Dorian in 2019 blow over the plants in the lab’s monarch garden, but also finding pesticide-free milkweed plants that the caterpillars would eat was harder than expected. Once the researchers overcame these challenges, though, they were able to film caterpillars competing with one another when the researchers limited the amount of available food.

“With decreasing food availability, we find increased levels of aggression,” as well as a “loser response,” with the caterpillar that gets attacked often leaving the area, says Elizabeth Brown, a biologist who works in Keene’s lab.

This kind of behavior does occur outside the lab, says Jaap de Roode, a biologist at Emory University in Atlanta who wasn’t involved in the research. Competition can be tough, he adds, because monarch caterpillars are limited in their food options. The insects eat only milkweed, and are more or less stuck on the plant that they’re born on until they bulk up, because crawling from plant to plant takes energy (SN: 7/10/18). If there isn’t enough food from the one plant to feed several caterpillars, “they won’t make it,” he says.

Making things more difficult, the caterpillars need a huge amount of food to transform into a butterfly. “From egg to chrysalis, they multiply their weight 3,000 times, and they do that in about two weeks,” de Roode says. That’s like a person gaining the weight of two blue whales in two weeks.

“Monarchs are like eating machines,” Keene says. But “some were much more aggressive than others.” So the next step could be exploring whether or not the more aggressive caterpillars grow into aggressive butterflies, he says.