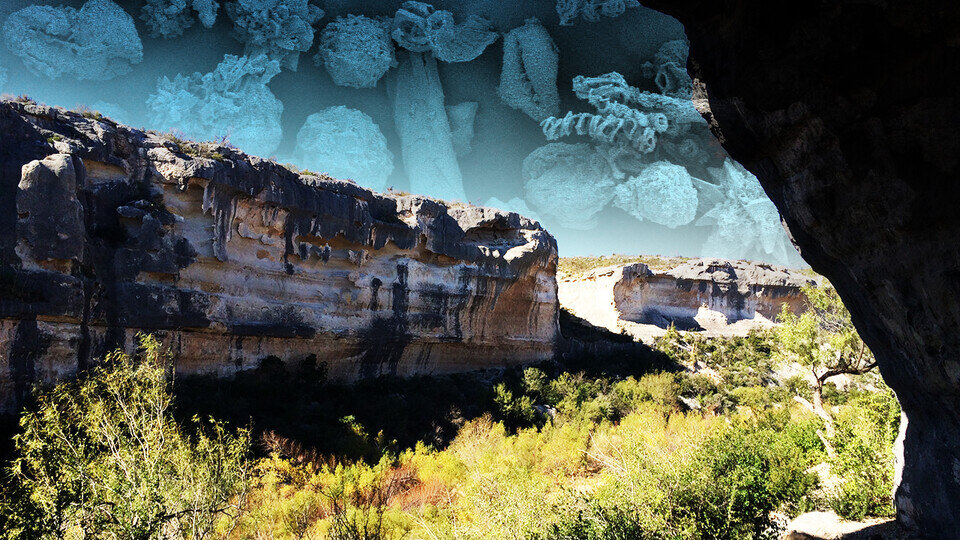 Sometime between 1,000 and 1,400 years ago, a man near the Rio Grande suffered a fatal case of constipation.

Infected with the parasite-carried Chagas disease, the man’s colon swelled to six times its normal diameter, the backed-up bulk of his digested and semi-digested food massive enough to crowd his spine.

For the last two to three months of his life in the Lower Pecos Canyonlands of modern-day Texas, the man starved. The final meals he did consume seemed to consist entirely of a food that his people rarely relied on for sustenance: grasshoppers. First, though, his family or community took care to pluck the extraneous bits.

“They were taking off the legs,” said Karl Reinhard, professor in the School of Natural Resources at the University of Nebraska–Lincoln. “So they were giving him mostly the fluid-rich body—the squishable part of the grasshopper. In addition to being high in protein, it was pretty high in moisture. So it would have been easier for him to eat in the early stages of his megacolon experience.”

The so-called Skiles mummy is one of three case studies that Reinhard recently re-analyzed and has detailed, alongside several co-authors, in a forthcoming chapter of “The Handbook of Mummy Studies.” All three of the re-analyzed mummies house microscopic evidence of what could be considered early hospice care, frequently in the form of distinctive foods that the individuals would have been too ill or too young to procure themselves.

Though the contents of the mummies’ intestines were first analyzed about 30 years ago, advances in microscopy and other analytical techniques have allowed researchers like Reinhard to review the cases with fresh, higher-resolution eyes. And some of the techniques that did already exist in the late 1980s and early 1990s, such as scanning electron microscopy, have since found their way from microbiology, geology and nano-engineering to the field that Reinhard calls pathoecology.

In the case of the Skiles mummy, Nebraska’s Julia Russ used scanning electron microscopy to examine phytoliths: minuscule structures in plant tissue that remain even after the rest of the plant decays. Phytoliths are so robust that they normally survive a trip through the rigors of the human intestinal tract, none the worse for wear. Which is why the researchers were stunned by what the microscope showed after scanning some phytoliths taken from the Skiles mummy.

“The phytoliths were split open, crushed. And that means there was incredible pressure that was exerted on a microscopic level in this guy’s intestinal system, which highlights even more the pathology that was exhibited here,” Reinhard said. “I think this is unique in the annals of pathology—this level of intestinal blockage and the pressure that’s associated with it.”

Reinhard himself specializes in identifying pollen, which proved useful when re-analyzing the intestinal contents of a partially mummified child who was buried between 500 and 1,000 years ago in Arizona’s Ventana Cave by the Hohokam people. Fruit from the iconic saguaro cactus long sustained residents of the area, including the Hohokam. But pollen and phytoliths from the child showed that he was also consuming its flowers, as many as 230 of them, in the weeks before he passed at age 5 or 6.

Given that the pollen was relatively fresh, Reinhard said the flowers must have been consumed—and that the child died—during the saguaro’s flowering season, likely between mid-May and early July. The species of flower was even more telling.

“The saguaro is a such a sacred plant that the use of it smacks of ceremony with regard to this mummified child,” he said.

So too does the toil that the community must have undertaken to harvest the blooms. Saguaros can grow more than 40 feet tall and sprout more than 40 arms, all of which are covered in needle-like spines. Its flowers tend to bloom near the top of the plant. Even when they don’t, prying them away from the cactus is still a “prickly business,” he said.

“It’s harder than hell to get the flowers off,” said Reinhard, who speaks from the experience of struggling to do just that, while precariously perched atop a ladder, back when he lived in Tucson. “Finally, Mom came out and said, “Hey, Karl, why don’t you go to the little saguaro instead?'”

The mummified remains of another, even younger child, buried roughly 750 years ago in southern Utah, reinforced the lengths to which a community would go for the sake of tending to an ailing loved one. The Pueblo people who resided there typically ate a varied diet of animals and plants, Reinhard said, which included a nutritious species of ricegrass, Achnatherum hymenoides. But when it examined the intestinal contents of the mummified child, Reinhard’s team found evidence of only A. hymenoides seeds.

Gathering the ricegrass was inefficient from a transactional standpoint—an hour of harvesting would yield just 400 calories worth of the grain—but it may have represented the community’s best hope of nourishing the ill child in early summer, when other edible plants were scarce.

“We’ve never seen that specific concentration of one kind of food” in the more than 600 intestinal samples Reinhard has analyzed from 15 sites on the Colorado Plateau. “This type of food is abundant when there’s no other kind of food available, but it takes a lot of effort to get it prepared for an individual.

“We can look at the experimental archaeology that shows us how difficult it is to collect those seeds. Then we can interpret that there were a lot of people helping this child survive.”

Being published as it is in a handbook, the first half of the team’s upcoming chapter focuses on best practices for preparing and analyzing the contents of mummified intestines. Reinhard said properly applying those methods—and properly identifying pollen or other telltale remnants of what a person last ingested—is essential to drawing valid conclusions about a life lived long ago. It’s why he takes such care and time to distinguish, say, the pollen of the saguaro from the similar-looking Oregon pipe cactus.

“I have a phobia about being wrong,” he said. “You want to understand the culture—that’s the goal—but if you’re wrong on the identification, then you start your trajectory of investigation off (the mark). So the culture is the ultimate question, but the science of identification is the first step.”

Provided by
University of Nebraska-Lincoln