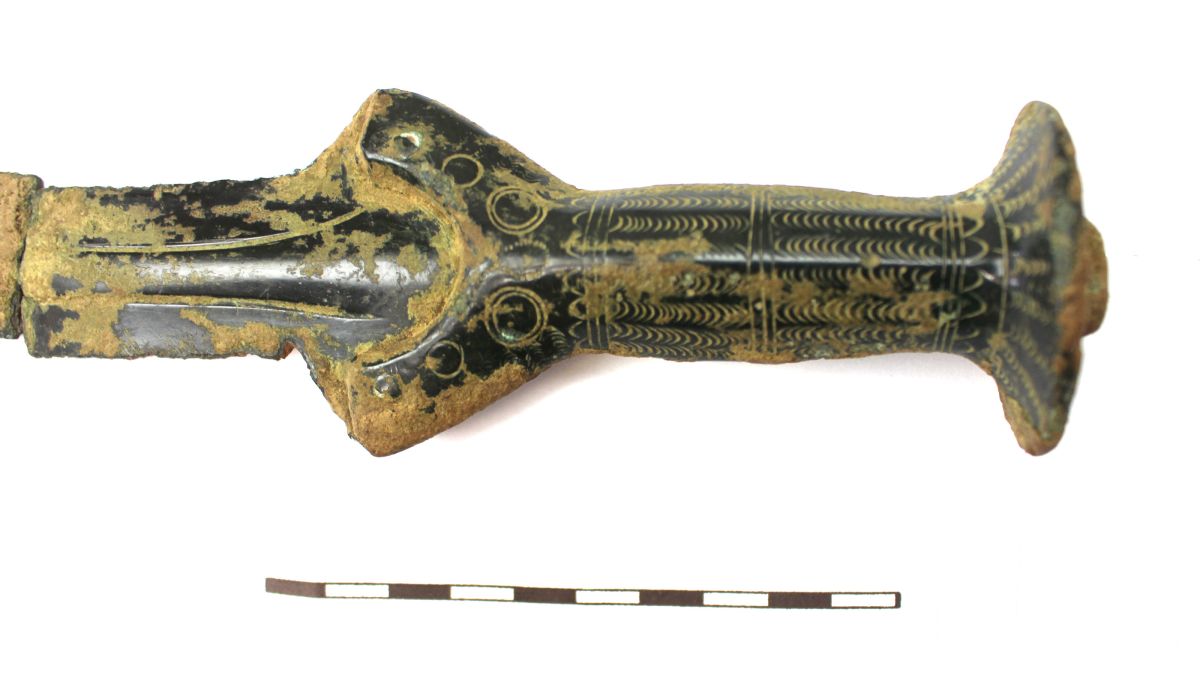 A man searching for mushrooms in a forest in the Czech Republic found much more than he was looking for when he uncovered an ancient sword and bronze axe, both thought to date from around 3,300 years ago.

Roman Novák was “mushrooming” in spring on a forested hillside near his home in the eastern Jesenicko region soon after it had rained, according to Radio Prague International.

Searching for edible mushrooms is a popular pastime in rural areas of the Czech Republic, and the fruiting body — the part of the fungus known as a mushroom — quickly swells with rainwater while the rest of the organism stays buried. Perhaps because he was looking at the ground, “I saw a piece of metal sticking out of some stones,” Novák told RPI. “I kicked it and found that it was a blade, part of a sword. I then dug some more to find a bronze axe.”

Related: The 25 most mysterious archaeological finds on Earth

Novák reported his find to archaeologists, and a formal excavation of the site is now planned by a team from the nearby Silesian Museum in the city of Opava.

The ancient sword is especially striking in appearance: Its pommel and hilt are intricately decorated with engraved circles and rows of crescent-shaped marks, and although the blade is broken near the hilt it is otherwise complete.

“At the moment, we are thoroughly traversing the site and looking for other possible finds,” archaeologist Jiří Juchelka from the Silesian Museum told Live Science in an email. The site was well away from contemporary towns and known prehistoric settlements, he said, in an “archaeologically marginal” area where no other finds had been reported.

Juchelka and his colleagues have completed several analyses of the artifacts, including tests of its chemical make-up and X-ray scans to reveal internal structures.

They’ve established that the ornately decorated bronze sword was crafted during the Bronze Age in northern Europe — and appears most similar to “Vasby” swords, named after a town in Sweden where an early example was found.

The types of metals used in the sword indicate it was probably made outside the region where it was found, while the bronze axe may be a local production, he said.

Juchelka told Radio Prague International that the sword would have been an expensive item at the time, when the Urnfield culture was just emerging in central Europe — a Bronze-Age culture so-called because of the practice of burying the dead in urns in fields.

X-rays showed air bubbles throughout the sword, likely the result of how it was crafted — the most common sword-making technique at the time involved pouring molten bronze into a mold, rather than the later practice of hammering red-hot metal into shape. The air bubbles also explain why the sword wasn’t especially strong, the researchers said.

Juchelka said the sword may have been used for ceremonies, rather than in combat; the archaeologists, however, aren’t sure how the sword and axe ended up together in the Czech forest.

“The finds may be related to a religious theme, [or] they may be part of a bronze treasure,” he said. “It is not easy to say, based on what we know.”