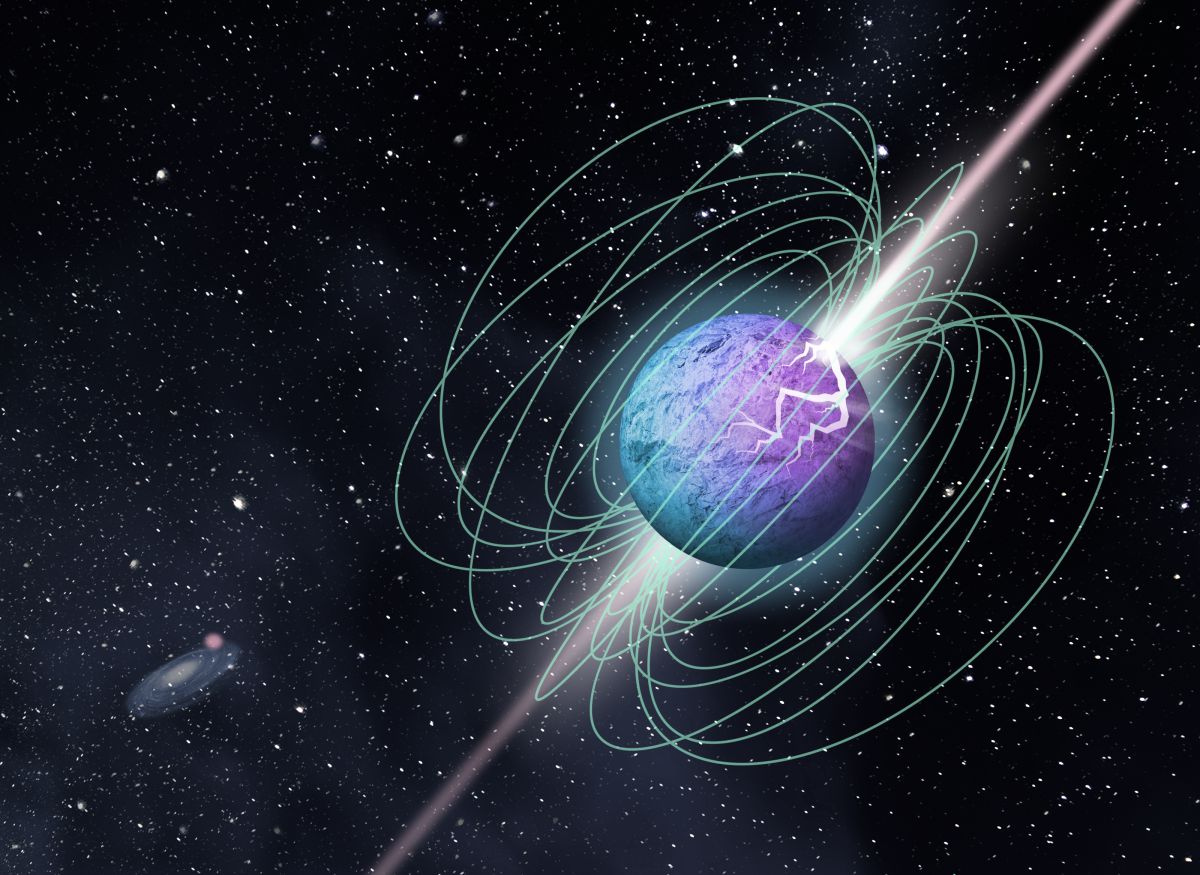 Fast radio bursts (FRBs) are some of the most energetic — and most brief — blasts of light in the universe.

These mysterious radio wave pulses flash through space a thousand times a day, occasionally brushing past Earth and its vigilant telescopes. FRBs appear and disappear in milliseconds, yet pack more energy than the sun unleashes in three days. Some FRBs repeat over days or months. Most travel hundreds of millions of light-years to reach Earth. And none have ever led back to a definitive source in the cosmos — until now.

In a series of three papers published today (Nov. 4) in the journal Nature, researchers from the United States and Canada report the detection of an FRB that originates not in some far-flung galaxy, but 30,000 light-years away in the northern sky of the Milky Way. Not only is this the first FRB ever detected within our own galaxy, but also the first to originate from a known object in the universe — in this case, a highly-magnetized stellar corpse known as a magnetar.

This burnt-out star — named SGR 1935+2154 — provides the first concrete evidence of the origins of FRBs after more than a decade of mystery, Daniele Michilli, a co-author of one of the new studies, told Live Science.

“This is the most powerful radio burst ever detected in our galaxy, which is exciting on its own,” Michilli, an astrophysicist with the FRB-hunting Canadian Hydrogen Intensity Mapping Experiment (CHIME), said in an email. “But now we finally have evidence of at least one object that can produce FRBs. Magnetars were already one of the main candidates, so it is a nice confirmation of our theories.”

Nestled in the bosom of a supernova remnant (the gassy graveyard left behind by a blown-apart star) in the constellation Vulpecula, SGR 1935+2154 first caught scientists’ attention in 2014 when it began flinging powerful X-ray and gamma-ray pulses in Earth’s direction. As the outbursts continued, astronomers identified the object as a magnetar.

Magnetars are a type of neutron star — the collapsed core of a once-mighty star that packs about twice the mass of Earth’s sun into a ball no wider than a city. When those balls are surrounded by a particularly strong magnetic field — trillions of times stronger than Earth’s — scientists call them magnetars.

For thousands of years after their formation, these temperamental objects cycle through periods of violent activity, beaming powerful pulses of X-ray and gamma-ray radiation into the universe around them at seemingly random intervals. The Milky Way hosts about 30 known magnetars, but none have ever spit out anything resembling an FRB in their high-energy tantrums.

None, except SGR 1935+2154. On April 28, 2020, the magnetar burst into a new period of activity; among the radiation it shot out was an FRB — two blips of bright radio energy, one lasting 0.58 milliseconds and the other 0.33, with about 30 milliseconds between them. The brief burst was 4,000 times brighter than any other radio pulse ever recorded in the Milky Way, the researchers wrote.

Two separate radio telescopes confirmed the FRB: CHIME, based in the hills of British Columbia, and the Survey for Transient Astronomical Radio Emission 2 (STARE2), a suite of three telescopes based in the southwestern United States. Both institutions traced the FRB to the same region of the sky, pinpointing the newly reactivated magnetar.

According to the researchers this is proof, at last, that active magnetars are capable of generating FRBs during their high-energy tantrums. Considering that as many as 50% of all stars that die in a core-collapse could become magnetars, there are more than enough magnetars in the universe to account for every observed FRB, the researchers said.

However, both teams acknowledged that there may well be other objects in the universe also fueling FRBs.

One troublesome point about the Milky Way magnetar FRB: Its estimated energy output was significantly lower than almost any other FRB detected outside our galaxy. It’s also “puzzling,” the researchers wrote, that none of the other 30 known magnetars in the Milky Way have ever released FRB-like energies before.

It’s impossible to rule out other cosmic events as possible FRB engines, the researchers concluded, such as two neutron stars colliding together, or certain black hole outbursts. But for now, at least, it’s safe to say that some of the universe’s strangest stars are responsible for some of its strangest light shows.