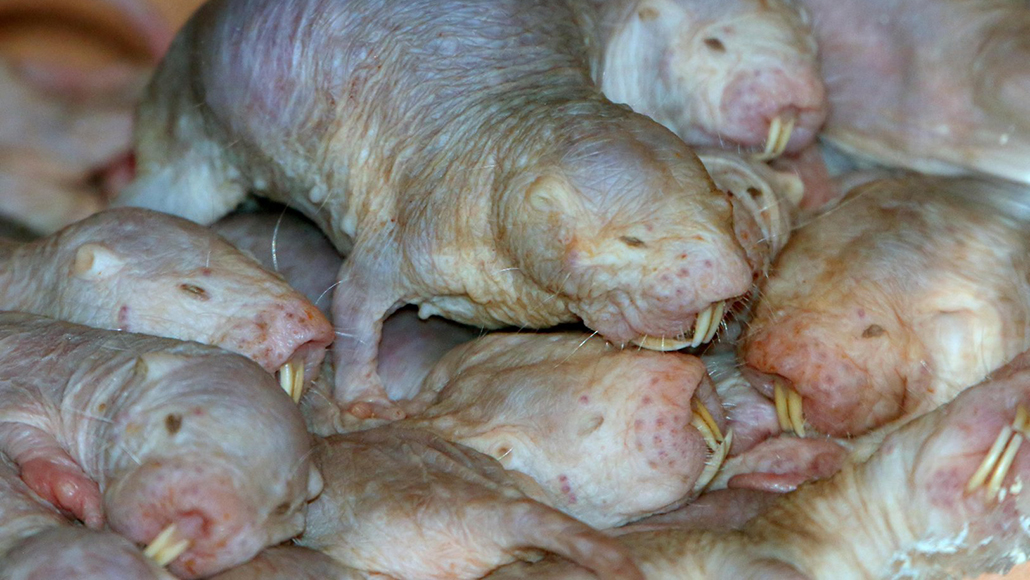 Naked mole-rats — with their subterranean societies made up of a single breeding pair and an army of workers — seem like mammals trying their hardest to live like insects. Nearly 300 of the bald, bucktoothed, nearly blind rodents can scoot along a colony’s labyrinth of tunnels.

New research suggests there’s brute power in those numbers: Like ants or termites, the mole-rats go to battle with rival colonies to conquer their lands.

Wild naked mole-rats (Heterocephalus glaber) will invade nearby colonies to expand their territory, sometimes abducting pups to incorporate them into their own ranks, researchers report September 28 in the Journal of Zoology. This behavior may put smaller, less cohesive colonies at a disadvantage, potentially supporting the evolution of bigger colonies.

Researchers stumbled across this phenomenon by accident while monitoring naked mole-rat colonies in Kenya’s Meru National Park. The team was studying the social structure of this extreme form of group living among mammals (SN: 6/20/06).

Over more than a decade, the team trapped and marked thousands of mole-rats from dozens of colonies by either implanting small radio-frequency transponder chips under their skin, or clipping their toes. One day in 1994, while marking mole-rats in a new colony, researchers were surprised to find in its tunnels mole-rats from a neighboring colony that had already been marked. The queen in the new colony had wounds on her face from the ravages of battle. It looked like a war was playing out down in the soil.

“Naked mole-rats are better known for their cooperation within colonies than competition between colonies,” notes Stan Braude, a biologist at Washington University in St. Louis. But over the course of the long-term study, Braude and his colleagues found that 26 colonies expanded their tunnels by digging into burrow systems occupied by neighboring colonies. In half of these cases, the invaded colony fled to a different arm of their tunnel system as the invaders expanded their territory. In the other half of cases, the invaded colony was entirely displaced, and the original mole-rats were never encountered there again. In four incursions, researchers caught invading mole-rats in the act, and in three of those, the bigger colony was doing the invading.

Genetic analysis, which was not available during the original research, later confirmed that during the 1994 invasion, the aggressors didn’t just evict the vanquished. They also pup-napped at least two youngsters. The pups grew up to become workers within their captors’ society.

This lust for conquest had been seen before in the species, but only in captive colonies. Confirmation that these conflicts happen naturally in the wild means that they may have some influence on the evolution of the mole-rats’ crowded social lives, Braude says. The total eviction of smaller colonies by larger ones presents a previously unconsidered factor that makes it “important for this species to live in as large a group as possible.”

Nothing about these “crazy beasts” surprises evolutionary biologist Chris Faulkes anymore. “The burrow is a massively valuable resource because it is so costly — in terms of energy — to excavate and build,” says Faulkes, of Queen Mary University of London. It makes sense that mole-rats would not only defend it, but try to pilfer this resource from others.

Since group size is so important to naked mole-rats, Faulkes says it’s interesting that workers from the different colonies don’t join together after an invasion. Only pups are added to the invading colony.

“The numbers of these kidnapped pups is really rather small, and these incidences of kidnapping may not be that frequent,” he says. “Given that, I’m not sure how much that really contributes to building large colony numbers.”

The researchers argue that since there’s such a narrow window of time after birth when a mole-rat can be stolen, the fact that these pup-nappings were documented at all may mean the behavior is fairly common.

Other forces may also be at play in facilitating the rise of large, tight-knit mole-rat colonies, like the spotty distribution of food resources in their harsh, dry habitat.

“Staying safe and finding food are absolutely important,” agrees Braude. Invasions might even abet that, contributing to the success of a mole-rat society. For instance, inhabiting a larger tunnel system may mean more access to the nutritious tubers the mole-rats find and feed upon underground.

Warfare isn’t the only strategy naked mole-rats have to boost their colony’s geographic and genetic influence. Some naked mole-rats are specially equipped with abundant fat reserves that allow them to journey long distances aboveground. These “dispersal morph” individuals interbreed with other colonies’ members and can potentially establish brand new colonies.