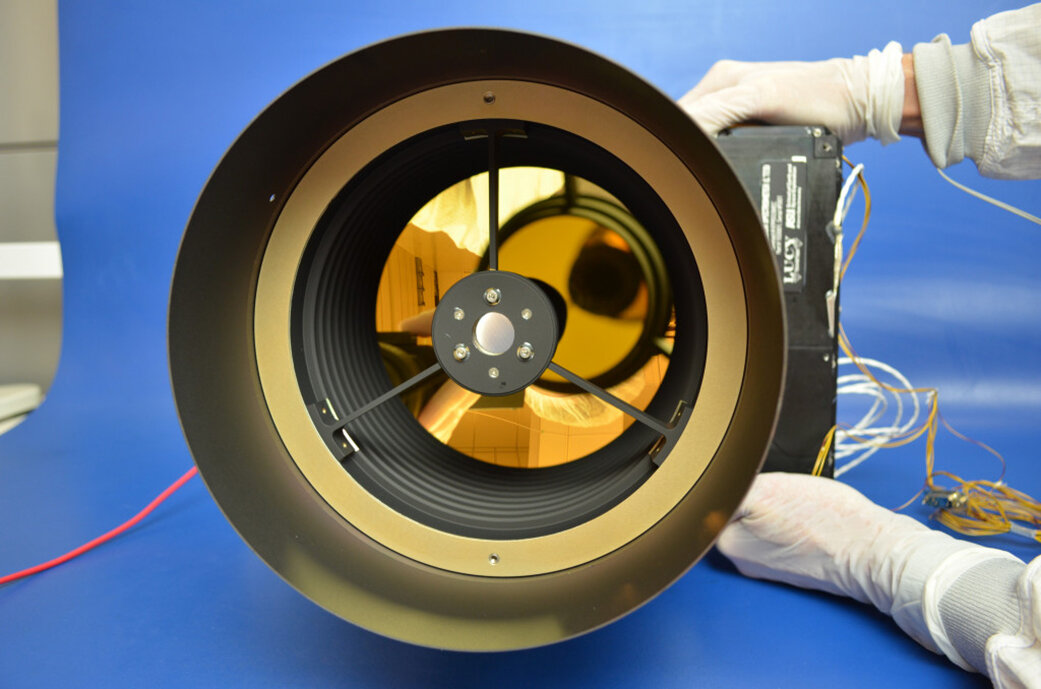 NASA’s Lucy mission is one step closer to launch as L’TES, the Lucy Thermal Emission Spectrometer, has been successfully integrated on to the spacecraft.

“Having two of the three instruments integrated onto the spacecraft is an exciting milestone,” said Donya Douglas-Bradshaw, Lucy project manager from NASA’s Goddard Space Flight Center in Greenbelt, Maryland. “The L’TES team is to be commended for their true dedication and determination.”

Lucy will be the first space mission to study the Trojan asteroids, leftover building blocks of the Solar System’s outer planets orbiting the Sun at the distance of Jupiter. The mission takes its name from the fossilized human ancestor (called “Lucy” by her discoverers) whose skeleton provided unique insight into humanity’s evolution. Likewise, the Lucy mission will revolutionize our knowledge of planetary origins and the birth of our solar system more than 4 billion years ago.

L’TES, developed by a team at Arizona State University (ASU), is effectively a remote thermometer. It will measure the far infrared energy emitted by the Trojan asteroids as the Lucy spacecraft flies by an unprecedented seven of these objects during this first ever mission to this population.

The instrument arrived at Lockheed Martin Space on December 13 and was successfully integrated on to the spacecraft on December 16. By measuring the Trojan asteroids’ temperatures, L’TES will provide the team with important information on the material properties of the surfaces. As the spacecraft will not be able to touch down on the asteroids during these high speed encounters, this instrument will allow the team to infer whether the surface material is loose, like sand, or consolidated, like rocks. In addition, L’TES will collect spectral information using thermal infrared observations in the wavelength range from 4 to 50 micrometers.

“The L’TES team has used our experienced designing, manufacturing, and operating similar thermal emission spectrometers on other missions such as OSIRIS-REx and the Mars Global Surveyor as we built this instrument,” said Instrument Principal Investigator, Phil Christensen. “Each instrument has its own challenges, but based on our experience we expect L’TES to give us excellent data, as well as likely some surprises, about these enigmatic objects.”

Despite the challenges surrounding the COVID-19 pandemics, Lucy is on schedule to launch in October 2021 as originally planned.

“I am constantly impressed by the agility and flexibility of this team to handle any challenges set before them,” said mission Principal Investigator, Hal Levison of Southwest Research Institute. “Just five years ago this mission was an idea on paper, and now we have many major components of the spacecraft and payload assembled, tested, and ready to go.”

In addition to L’TES, Lucy’s High Gain Antenna, which will enable spacecraft communication with the Earth for navigation and data collection, as well as precise measurement of the masses of the Trojan asteroids, was recently installed. It joined L’LORRI, Lucy’s highest resolution camera, built by the Johns Hopkins Applied Physics Laboratory, which was installed in early November. Lucy’s remaining scientific instrument, L’Ralph, the mission‘s color imaging camera and infrared spectrometer, is scheduled to be delivered in early 2021.