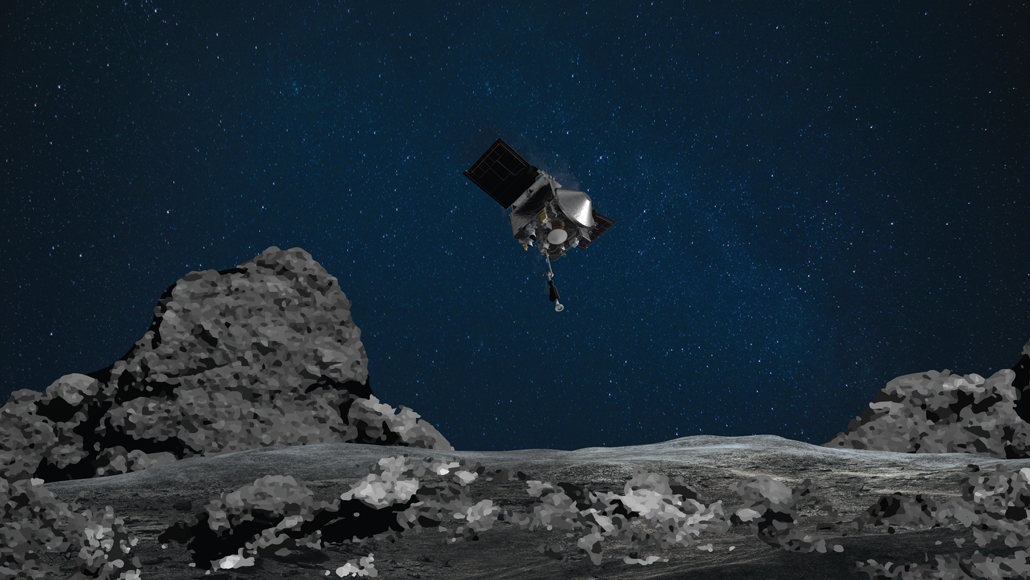 NASA’s OSIRIS-REx spacecraft is a cosmic rock collector. Cheers erupted from mission control at 6:12 p.m. EDT on October 20 as scientists on Earth got word that the spacecraft had gently nudged a near-Earth asteroid called Bennu, and grabbed some of its rocks to return to Earth.

“The spacecraft did everything it was supposed to do,” said mission principal investigator Dante Lauretta of the University of Arizona in Tucson on a NASA TV webcast. “I can’t believe we actually pulled this off.”

OSIRIS-REx arrived at Bennu in December 2018, and spent almost two years making detailed maps of the 500-meter-wide asteroid’s surface features and composition (SN: 10/8/20). Observations from Earth suggested Bennu should be smooth and sandy, but when OSIRIS-REx arrived, it found a treacherous, rocky landscape.

The team selected a relatively smooth patch in a crater named Nightingale. The spot was not without hazards, though — the team was so worried about a particularly large rock nearby that they named it “Mount Doom” (SN: 12/12/19).

Luckily, the spacecraft did not need to fully land in the crater to complete its mission. As it hovered just above the surface, OSIRIS-REx reached out a robotic arm with an instrument called TAGSAM at the end, for Touch-And-Go Sample Acquisition Mechanism. The instrument tapped the asteroid lightly for several seconds, and released a burst of nitrogen gas to disturb the surface dust and pebbles. Once those small rocks were lofted, some hopefully were blown into the sample collector.

Because signals from Earth took 18½ minutes to reach Bennu, the spacecraft performed the sampling sequence autonomously. When the mission team got the signal that the spacecraft had finished its job and retreated to a safe distance from Bennu, team members pumped their arms in the air, cheered and sent each other socially distant high-fives and hugs.

OSIRIS-REx is not the first spacecraft to grab samples from an asteroid. That distinction goes to Japan’s Hayabusa mission, which brought back grains of asteroid Itokawa in 2010 (SN: 6/14/10). An encore to that mission, Hayabusa2, collected samples of asteroid Ryugu last year, and is on track to land in Australia in December (SN: 2/22/19).

Hayabusa2’s scientists have no way to know how much material it actually collected until the spacecraft returns to Earth. But OSIRIS-REx’s team plans to find out using the spacecraft itself. On October 24, the spacecraft will extend its arm and spin its whole body. The difference in the way it spins before and after the sample collection will reveal the mass of the sample.

OSIRIS-REx will return to Earth in 2023, where scientists will analyze the rocks in hopes of unlocking details of the history of the solar system and the origins of water and life on Earth (SN: 1/15/19).