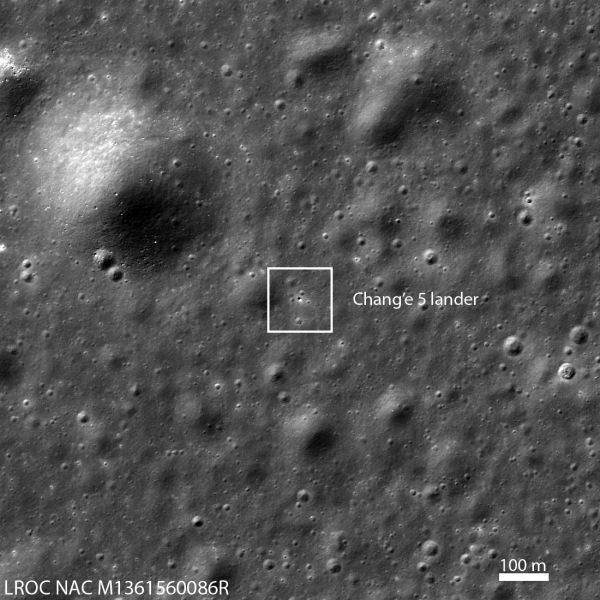 NASA’s Lunar Reconnaissance Orbiter captured an image of China’s Chang’e 5 lander on the moon just hours after its historic landing.

The Chang’e 5 lander set down on the lunar surface last Tuesday, Dec. 1. Thanks to China’s prompt release of the stunning Chang’e 5 landing video, the Lunar Reconnaissance Orbiter Camera (LROC) team were able to locate the roughly 4-ton spacecraft in Oceanus Procellarum, the “Ocean of Storms,” and prepare for when LRO would pass overhead the next day.

The image shows the Chang’e 5 lander in the center of three craters. Automated systems had helped the spacecraft avoid these hazards to land safely.

Related: China on the moon! A history of Chinese lunar missions in pictures

The relatively flat area near the Chang’e 5 lander was created by basaltic lavas. While over a billion years old, this unit of basalt is thought to be much younger than the Apollo landing areas, which are aged at over 3 billion years. Samples are therefore of great interest to scientists, who want to know why this region was volcanically active much more recently than most other places on the moon.

The Chang’e 5 sample return mission is expected to last just 23 days, ending with a landing in Inner Mongolia around Dec. 17.

LRO meanwhile has been mapping the moon in high definition for more than 11 years while also hunting for signs of water.