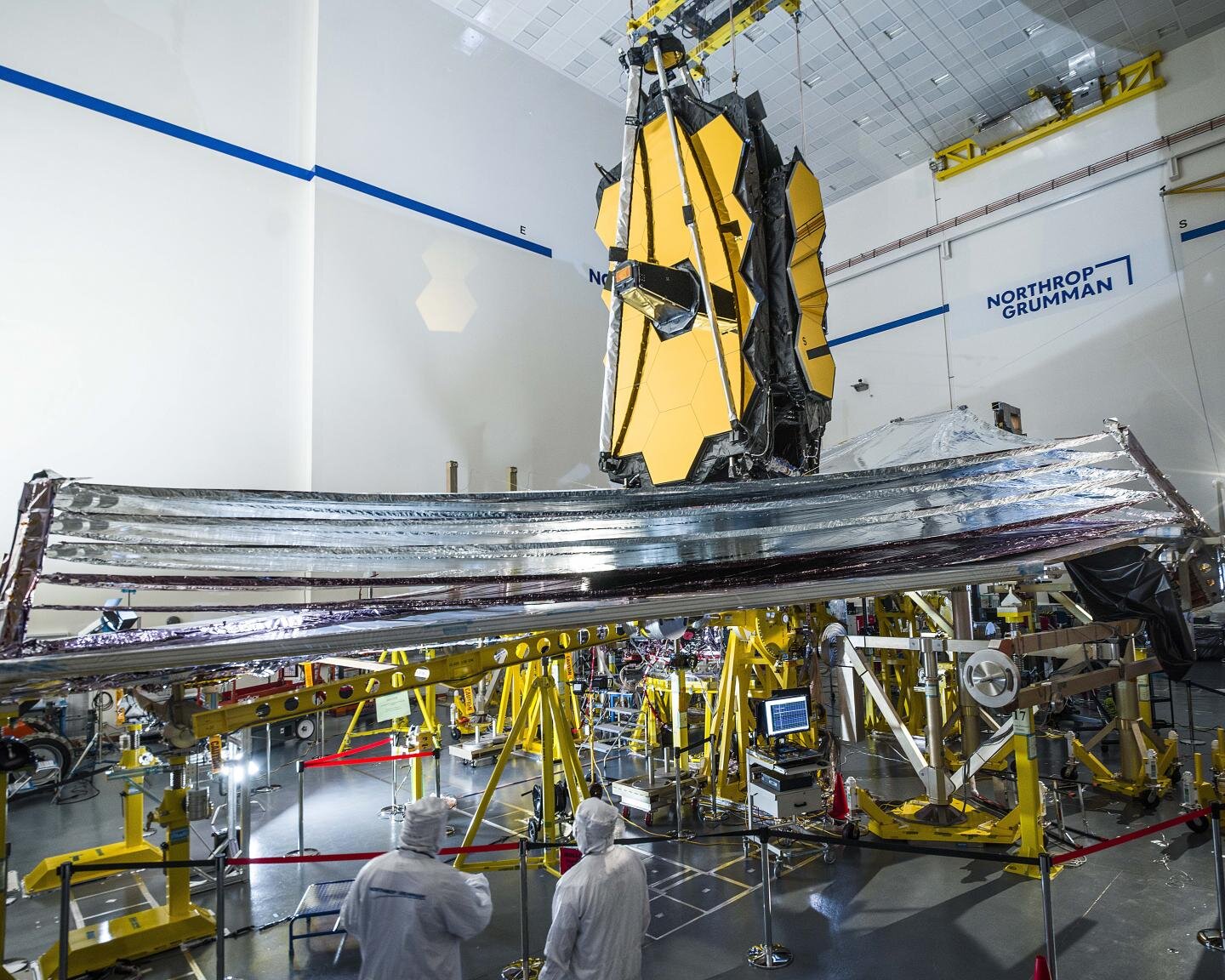 Lengthened to the size of a tennis court, the five-layer sunshield of NASA’s fully assembled James Webb Space Telescope successfully completed a final series of large-scale deployment and tensioning tests. This milestone puts the observatory one step closer to its launch in 2021.

“This is one of Webb’s biggest accomplishments in 2020,” said Alphonso Stewart, Webb deployment systems lead for NASA’s Goddard Space Flight Center in Greenbelt, Maryland. “We were able to precisely synchronize the unfolding motion in a very slow and controlled fashion and maintain its critical kite-like shape, signifying it is ready to perform these actions in space.”

The sunshield protects the telescope and reflects light and background heat from the Sun, Earth and Moon into space. The observatory must be kept cold to accomplish groundbreaking science in infrared light, which is invisible to human eyes and felt as heat.

In the sunshield’s shadow, Webb’s innovative technologies and sensitive infrared sensors will allow scientists to observe distant galaxies and study many other intriguing objects in the universe.

“Congratulations to the entire team. Due to Webb’s large size and stringent performance requirements, the deployments are incredibly complex. In addition to the required technical expertise, this set of tests required detailed planning, determination, patience and open communication. The team proved that it has all these attributes. It’s amazing to think that next time Webb’s sunshield is deployed it will be many thousands of miles away, hurtling through space,” said James Cooper, Webb’s sunshield manager at Goddard.

During testing, engineers sent a series of commands to spacecraft hardware that activated 139 actuators, eight motors, and thousands of other components to unfold and stretch the five membranes of the sunshield into its final taut shape. A challenging part of the test is to unfold the sunshield in Earth’s gravity environment, which causes friction, unlike unfolding material in space without the effects of gravity.

For launch the sunshield will be folded up around two sides of the observatory and placed in an Ariane 5 launch vehicle, which is provided by the European Space Agency.

In this test, two pallet structures that hold the sunshield upright folded down, then two huge “arms” (known as the Mid-Boom Assembly) of the sunshield slowly telescoped outward, pulling the folded membranes along with them to resemble the synchronized movements of a very slowly choreographed dance. Once the arms locked in their horizontal position, the membranes of the sunshield were successfully tensioned individually starting with the bottom layer, separating each into their fully deployed shape.

“This milestone signals that Webb is well on its way to being ready for launch. Our engineers and technicians achieved incredible testing progress this month, reducing significant risk to the project by completing these milestones for launch next year,” said Bill Ochs, project manager for Webb at Goddard. “The team is now preparing for final post-environmental deployment testing on the observatory these next couple of months prior to shipping to the launch site next summer.”

Webb has passed other rigorous deployment tests during its development, which successfully uncovered and resolved technical issues with the spacecraft. These tests validate that once in orbit, the observatory and its many redundant systems will function flawlessly.