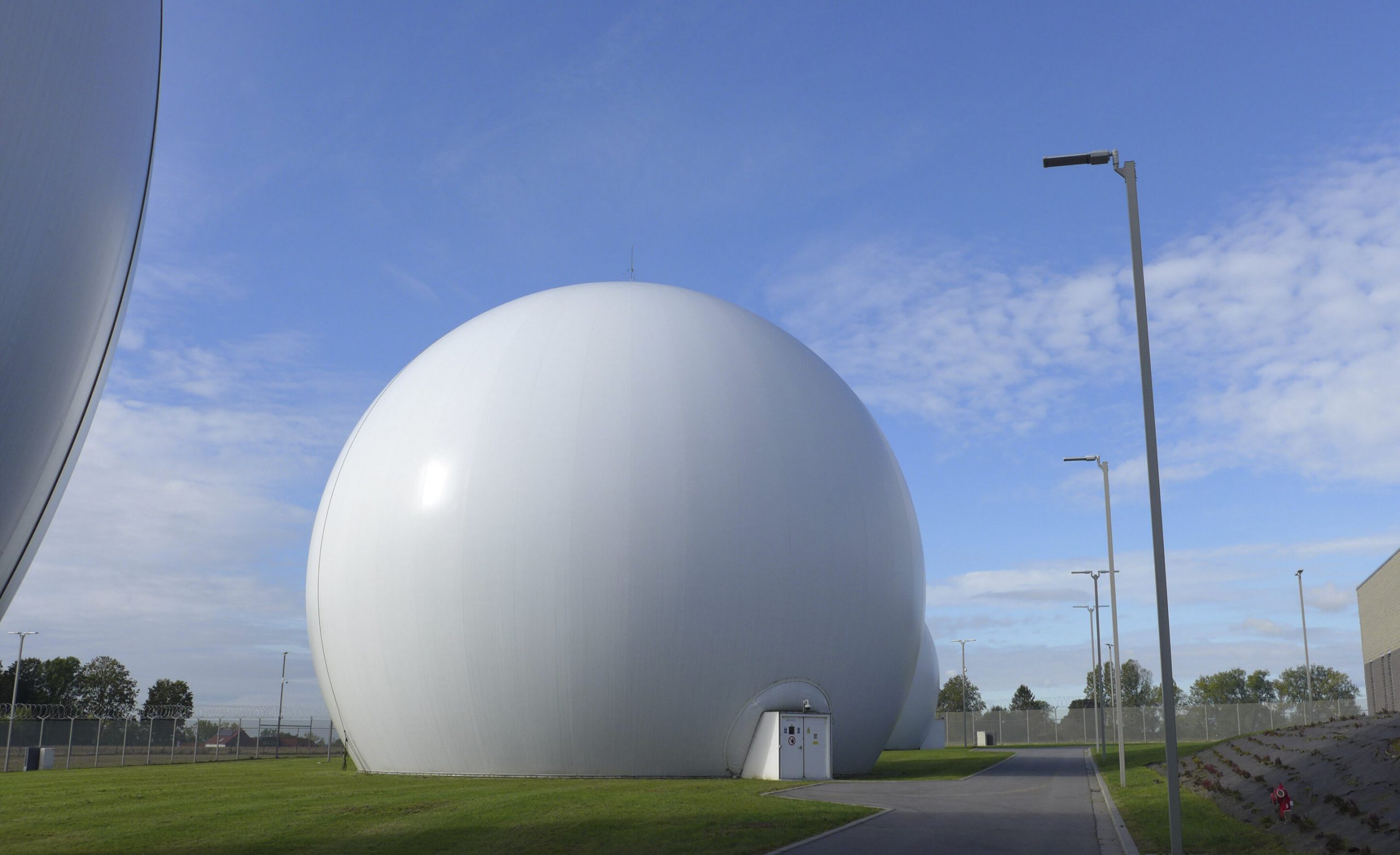 To a few of the locals, the top-secret, fenced-off installation on the hill is known as “the radar station.” Some folks claim to have seen mysterious Russians in the area. Over the years, rumors have swirled that it might be a base for U.S. nuclear warheads.

It’s easy to see how the rumors start. The site is visually striking. Four huge white Kevlar balls sit like giant spherical spacecraft in a compound in the middle of open farm country 25 kilometers (16 miles) west of Belgium’s capital, Brussels.

But the Kester Satellite Ground Station is both safer and more sophisticated than local lore might suggest. It’s central to space communications at NATO—the biggest and most modern of four such stations the military alliance runs.

Around 2,000 satellites orbit the earth, over half operated by NATO countries, ensuring everything from mobile phone and banking services to weather forecasts. NATO commanders in places like Afghanistan or Kosovo rely on some of them to navigate, communicate, share intelligence and detect missile launches.

This week, the site at Kester is set to fall under a new orbit, when NATO announces that it is creating a space center to help manage satellite communications and key parts of its military operations around the world.

In December, NATO leaders declared space to be the alliance’s “fifth domain” of operations, after land, sea, air and cyberspace. Over two days of talks starting Thursday, NATO defense ministers will greenlight a new space center at the alliance’s Air Command in Ramstein, Germany.

“This will be a focal point for ensuring space support to NATO operations, sharing information and coordinating our activities,” NATO Secretary-General Jens Stoltenberg said before the meeting.

It’s part of the alliance’s efforts to keep ahead in a fast moving and hi-tech sector, particularly amid concern about what member countries say is increasingly aggressive behavior in space by China and Russia.

Around 80 countries have satellites and private companies are moving in too. In the 1980s, just a fraction of NATO’s communications was via satellite. Today, it’s at least 40%. During the Cold War, NATO had more than 20 stations, but new technologies mean the world’s biggest security organization can double its coverage with a fifth of that number.

At Kester, behind a double security fence, massive steel gates and bulletproof glass in a facility that can withstand a terror attack or any attempt to jam communications, four satellite dishes ensconced in Kevlar domes connect NATO’s civilian and military headquarters in Belgium to their operations around the world.

From their elevated position, the dishes—two of them 16 meters (52 feet) in diameter—beam information and imagery down across Europe and over Africa into space above the equator where satellites owned by allies like the United States, Britain, France and Italy orbit. NATO itself doesn’t own any satellites.

Around the globe, commanders in ships, aircraft and mobile or static headquarters decrypt the data to gather orders, pictures and intelligence, prepare missions, or move troops and military equipment. From Kester, new lines of communication can be set up for NATO within a half-hour.

Much of the facility is encased in thick steel plates, including the ducts where cables run, to withstand any attack by electromagnetic pulses—high bursts of energy that can knock out electrical power grids or destroy electronic circuit boards and components.

But NATO allies are increasingly concerned about other kinds of attacks using anti-satellite weapons miles above the earth which could wreak havoc below and leave dangerous debris adrift in space.

“Some nations – including Russia and China – are developing anti-satellite systems which could blind, disable or shoot down satellites and create dangerous debris in orbit. We must increase our understanding of the challenges in space and our ability to address them,” Stoltenberg said.

For the moment, the military alliance insists that its “approach will remain defensive and fully in line with international law.” And despite the strides being made in the “fifth domain,” Stoltenberg has repeatedly said over the last year that “NATO has no intention to put weapons in space.”