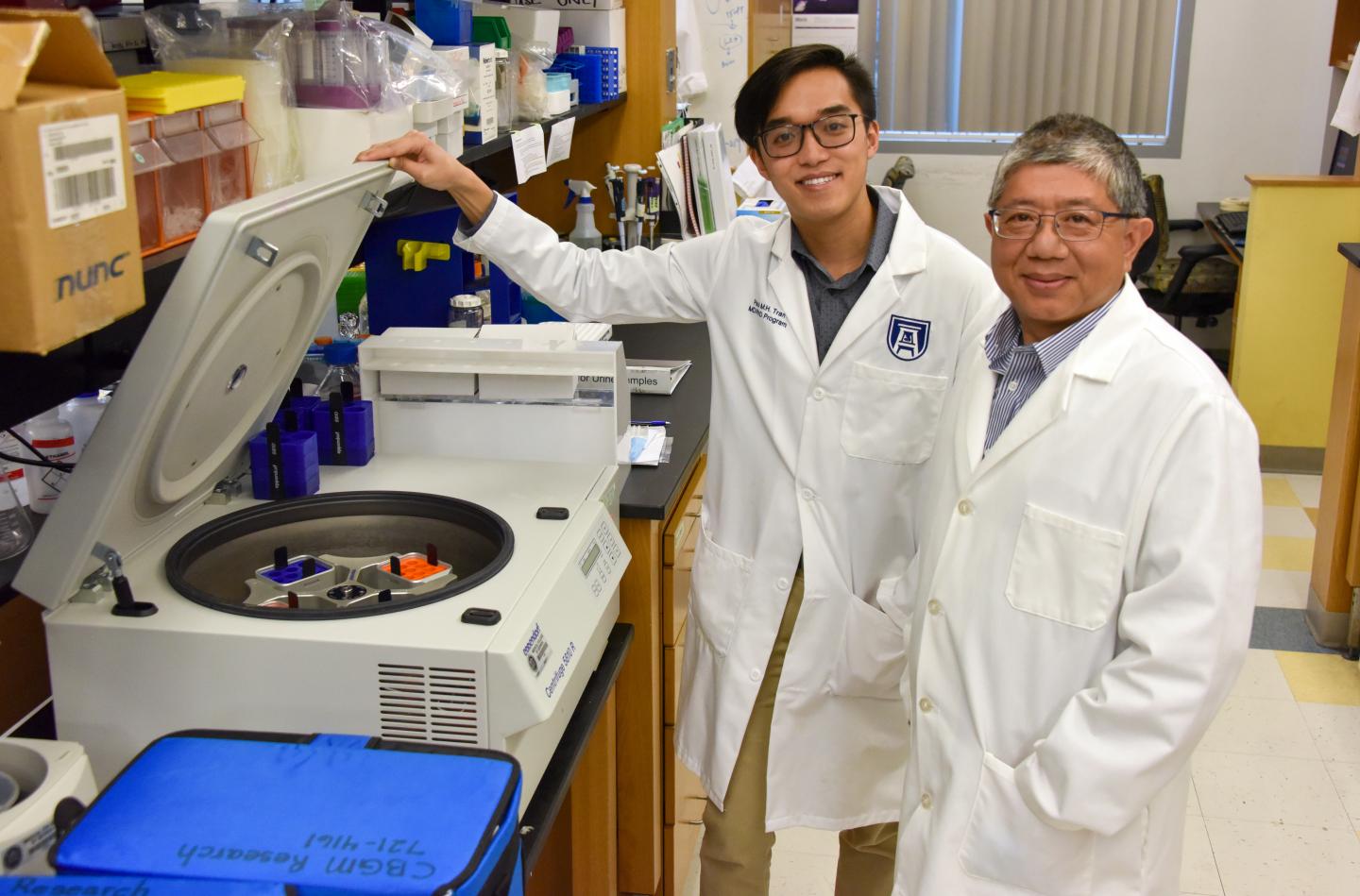 AUGUSTA, Ga. (Jan. 19, 2021) – A look at RNA tells us what our genes are telling our cells to do, and scientists say looking directly at the RNA of brain tumor cells appears to provide objective, efficient evidence to better classify a tumor and the most effective treatments.

Gliomas are the most common brain tumor type in adults, they have a wide range of possible outcomes and three subtypes, from the generally more treatable astrocytomas and oligodendrogliomas to the typically more lethal glioblastomas.

Medical College of Georgia scientists report in the journal Scientific Reports that their method, which produces what is termed a transcriptomic profile of the tumor is particularly adept at recognizing some of the most serious of these tumors, says Paul M.H. Tran, MD/PhD student.

Gliomas are currently classified through histology, primarily the shape, or morphology, pathologists see when they look at the cancerous cells under a microscope, as well as identification of known cancer-causing gene mutations present.

“We are adding a third method,” says Dr. Jin-Xiong She, director of the MCG Center for Biotechnology and Genomic Medicine, Georgia Research Alliance Eminent Scholar in Genomic Medicine and the study’s corresponding author. Tran, who is doing his PhD work in She’s lab, is first author.

While most patients have both the current classification methods performed, there are sometimes inconsistent findings between the two groups, like traditional pathology finding a cancer is a glioblastoma when the mutation study did not and vice versa, and even when two pathologists look at the same brain tumor cells under a microscope, the scientists say.

To more directly look at what a cancer cell is up to, they opted to look at relatively unexplored gene expression, more specifically the one-step downstream RNA, which indicates where the cell is headed. DNA expression equals RNA since DNA makes RNA, which makes proteins, which determine cell function. One way cancer thrives is by altering gene expression, turning some up and others way down or off.

They suspected the new approach would provide additional insight about the tumor, continue to assess the efficacy of existing classification methods and likely identify new treatment targets.

“RNA would be a snapshot of what is high and what is low currently in those glial cells as they are taken out of the body,” Tran says. “They are actually looking at how many copies of RNA relevant genes are making. Normally that gene expression determines everything from your hair color to how much you weigh,” She says. “The transcriptomic profile counts the number of copies of each gene you have in the cell.”

The glial cells, whose job is to support neurons, have a tightly regulated gene expression that enables them to do just that. With cancer, one of the first things that happens is how many RNA copies of each gene the cells are making changes and the important cell function changes with it. “You change gene expression to become something different,” She says.

Transcriptomic profiling starts like the other methods with a tumor sample from the surgeon, but then it goes through an automated process to extract RNA, which is put into an instrument that can read gene expression levels for the different genes. The massive amounts of data generated then is fed into a machine learning algorithm Tran developed, which computes the most likely glioma subtype and a prognosis associated with it.

They started with The Cancer Genome Atlas (TCGA) program and the Repository of Molecular Brain Neoplasia Data (REMBRANDT), two datasets that had already done the work of looking at RNA and also provided related clinical information, including outcomes on more than 1,400 patients with gliomas. Tran, She and their colleagues used their algorithm to discover patterns of gene expression and used those patterns to classify all glioma patients without any other input. They then compared the three major glioma subtypes that emerged with standard classification methods.

Their transcriptomic classification had about 90% agreement with the traditional approach looking at cells under a microscope and about 93% agreement with looking at genetic mutations, She says. They found about a 16% discrepancy between the two standard measures.

“All three methods don’t agree on about 10-15% of patients,” She says, but notes the most accurate analysis among the three should be theirs because their method is better than the others at predicting survival.

And the discrepancies they found between classification methods could be significant for some patients despite close percentages.

“We found our method may have some advantages because we found some patients actually had a worse prognosis that could be identified by our method, but not by the other approaches,” Tran says.

As an example, patients with a mutation in a gene called IDH, or isocitrate dehydrogenase, most typically have an astrocytoma or oligodendroglioma, which are generally more responsive to treatment and have better survival rates than glioblastomas. However they also found that even some lower-grade gliomas with this IDH mutation can progress to what’s called a secondary glioblastoma, something which may not be found by the other two methods. The IDH mutation is rare in primary glioblastomas, Tran notes.

Using the standard techniques, which look at a snapshot in time, these astrocytomas that progress to more lethal glioblastomas were classified as a less serious tumor in 27 patients. “That progression phenomenon is known but our technique is better at identifying those cases,” Tran says.

Further analysis also found that about 20% of the worse-prognosis patients had mutations in the promoter region of the TERT gene. The TERT gene is best known for making telomerases, enzymes that enable our chromosomes to stay a healthy length, a length known to decrease with age. TERT function is known to be hijacked by cancer to enable the endless cell proliferation that is a cancer hallmark. This mutation is not usually present in a glioma that starts out as a more aggressive glioblastoma, and implicates a mutation in the TERT promoter is important in glioma progression, they say.

“The implication would be that if we have inhibitors or something else that target the TERT gene, then you may be able to prevent some of those cases from having a worse prognosis,” Tran says.

These findings also point to strengths of the different classification methods, in this case suggesting that classification by mutation may not pick up these most aggressive brain tumors rather their new transcriptomic method, as well as the older approach of looking at the cancer cells under a microscope, are better at making this important distinction.

“It is known that a certain proportion of your lower-grade gliomas can progress to become a glioblastoma and those are some of the ones that can sometimes be misidentified by the original techniques,” Tran says. “Using our gene expression method, we found them even though some of them have the IDH mutation.”

All these variations have groups like the World Health Organization asking for better ways to determine poor prognosis IDH patients, they write. Other variations include some glioblastomas with the normal IDH gene carry one of the worse prognoses for gliomas, but there is a subgroup of glioblastomas that act more like astrocytes and tend to carry a better prognosis.

Now that the MCG team has a better indication of which patients will have a worse prognosis, next steps including finding out why and maybe what can be done.

In addition to accuracy of prognosis, a second way to assess a tumor classification method is whether it points you toward better treatment options, She says, which they are now moving toward. He notes that most drugs and many of our actions, like exercise and what we eat, alter RNA expression.

Gliomas are tumors of glial cells — which include astrocytes, oligodendrocytes and microglial cells — brain cells which outnumber neurons and whose normal job is to surround and support neurons.

Identification of IDH gene mutations in the cells has already made standard glioma classification more systematic, the scientists say. The mutation can be identified by either staining the biopsy slide or by sequencing for it.

Much progress also has been made in using machine learning to automate and objectify cancer diagnosis and subtyping they write, including glioblastomas. Glioblastomas have been characterized using transcriptome-based analysis but not all gliomas, like the current study.

Like most genes, the IDH gene normally has many jobs in the body, including processing glucose and other metabolites for a variety of cell types. But when mutated, it can become destructive to cells, producing factors like reactive oxygen species, which damage the DNA and contribute to cancer and other diseases. These mutations can result with age and/or environmental exposures. IDH inhibitors are in clinical trials for a variety of cancers including gliomas.