New dinosaur showed descendants how to dress to impress 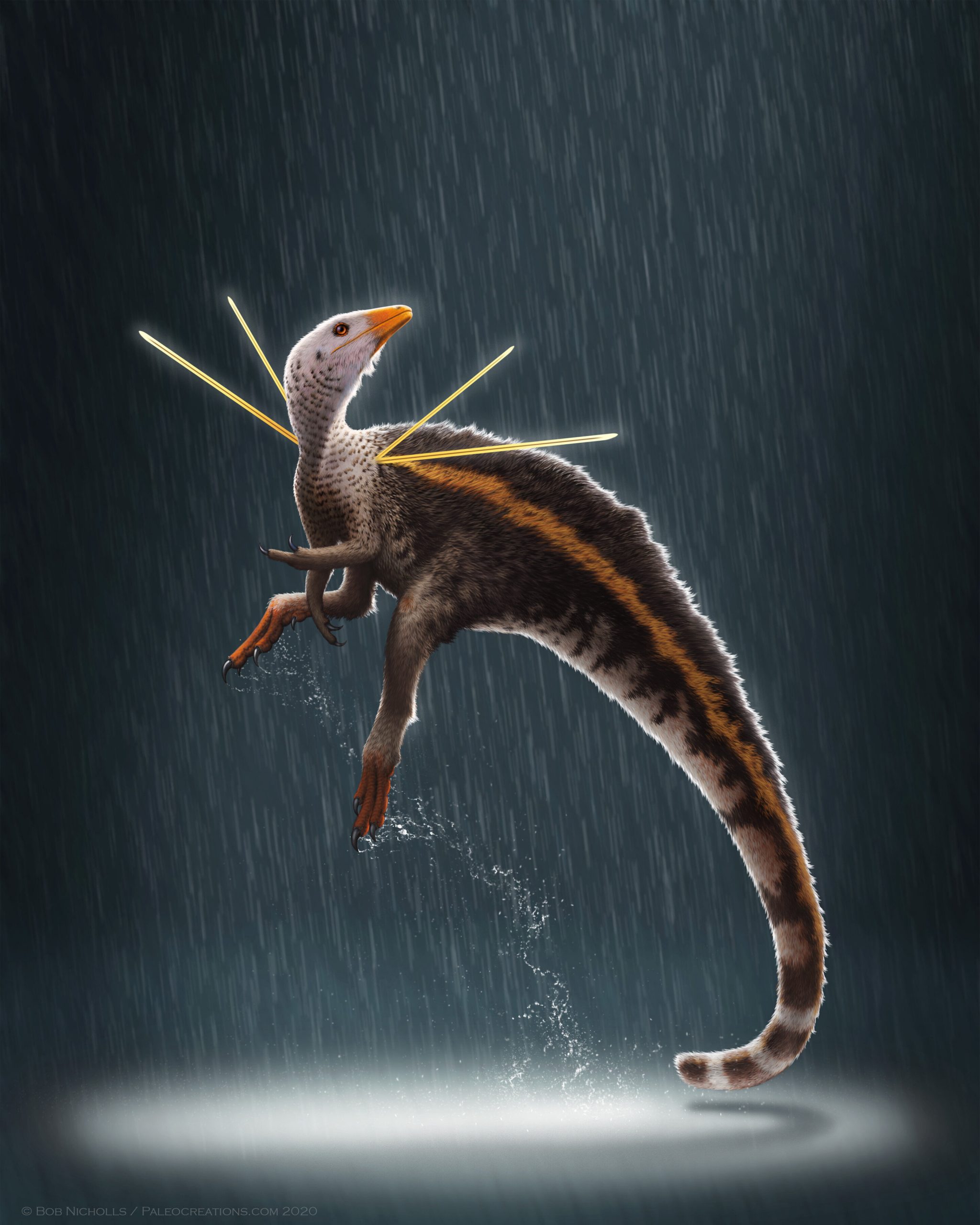 Scientists have found the most elaborately dressed-to-impress dinosaur ever described and say it sheds new light on how birds such as peacocks inherited their ability to show off.

The new species, Ubirajara jubatus, was chicken-sized with a mane of long fur down its back and stiff ribbons projecting out and back from its shoulders, features never before seen in the fossil record.

It is thought its flamboyant features were used to dazzle mates or intimidate foe.

An international team of scientists co-led by Professor David Martill and researcher Robert Smyth, both at the University of Portsmouth, and Professor Dino Frey at the State Museum of Natural History, Karlsruhe, Germany discovered the new species while examining fossils in Karlsruhe´s collection.

The study is published in the scientific journal Cretaceous Research.

Professor Martill said: “What is especially unusual about the beast is the presence of two very long, probably stiff ribbons on either side of its shoulders that were probably used for display, for mate attraction, inter-male rivalry or to frighten off foe.

“We cannot prove that the specimen is a male, but given the disparity between male and female birds, it appears likely the specimen was a male, and young, too, which is surprising given most complex display abilities are reserved for mature adult males.

“Given its flamboyance, we can imagine that the dinosaur may have indulged in elaborate dancing to show off its display structures.”

The ribbons are not scales or fur, nor are they feathers in the modern sense. They appear to be structures unique to this animal.

Mr Smyth said: “These are such extravagant features for such a small animal and not at all what we would predict if we only had the skeleton preserved. Why adorn yourself in a way that makes you more obvious to both your prey and to potential predators?

“The truth is that for many animals, evolutionary success is about more than just surviving, you also have to look good if you want to pass your genes on to the next generation.

“Modern birds are famed for their elaborate plumage and displays that are used to attract mates—the peacock’s tail and male birds-of-paradise are textbook examples of this. Ubirajara shows us that this tendency to show off is not a uniquely avian characteristic, but something that birds inherited from their dinosaur ancestors.”

Ubirajara jubatus lived about 110 million years ago, during the Aptian stage of the Cretaceous period, and is closely related to the European Jurassic dinosaur Compsognathus.

A section of the long, thick mane running down the animal´s back is preserved nearly intact. The arms were also covered in fur-like filaments down to the hands.

The mane is thought to have been controlled by muscles allowing it to be raised, in a similar way a dog raises its hackles or a porcupine raises its spines when threatened.

Ubirajara could lower its mane close to the skin when not in a display mode allowing the creature to move fast without getting tangled in vegetation.

Professor Martill said: “Any creature with movable hair or feathers as a body coverage has a great advantage in streamlining the body contour for faster hunts or escapes but also to capture or release heat.”

The mane isn’t the only extraordinary feature.

The researchers describe as ‘enigmatic’ the creature’s long, flat, stiff shoulder ribbons of keratin, each with a small sharp ridge running along the middle. These ribbons were positioned to not impede freedom of movement in its arms and legs, so wouldn’t have limited the animal’s ability to hunt, preen and send signals.

Mr Smyth argues the elaborate plumage of Ubirajara might have improved its chances of survival.

He said: “We know lots of dinosaurs had bony crests, spines and frills that were probably used for display but we don’t see these very often in living birds. In birds, crests are made of feathers.

“This little dinosaur provides some insight into why this might be the case.

“Bone requires a lot of energy for a body to grow and maintain, it’s also heavy and can cause serious injury if broken.

“Keratin—the material that makes up hair, feathers and scales—is a much better display alternative for a small animal like this one. Keratin is less costly for a body to produce, it’s also lightweight, flexible and can be regularly replaced if damaged.

“Ubirajara is the most primitive known dinosaur to possess integumentary display structures. It represents a revolution in dinosaur communication, the effects of which we can still see today in living birds.”

Professor Frey excavated the specimen from the two slabs of stone in which it lay and, using X-ray, found previously hidden skeletal elements and soft tissue, allowing the researchers to build a clear picture of its features.

Another of the researchers on the team, Hector Rivera Sylva, from Museo del Desierto, Mexico, said as well as the discovery being a watershed in this field, it was also important for the Americas.

He said: “The Ubirajara jubatus is not only important because of the integumentary structures present for the first time in a non-avian dinosaur, completely changing the way of seeing the behaviour of certain dinosaurs. Rather, the scientific value transcends, forming a watershed, since it is the first evidence for this group in Latin America, as well as one of the few reported for the subcontinent of Gondwana, expanding the knowledge about non-avian feathered dinosaurs for America, whose evidence is very scarce.”

The mystery of feather origins: How fluffy pterosaurs have reignited debate

Provided by
University of Portsmouth