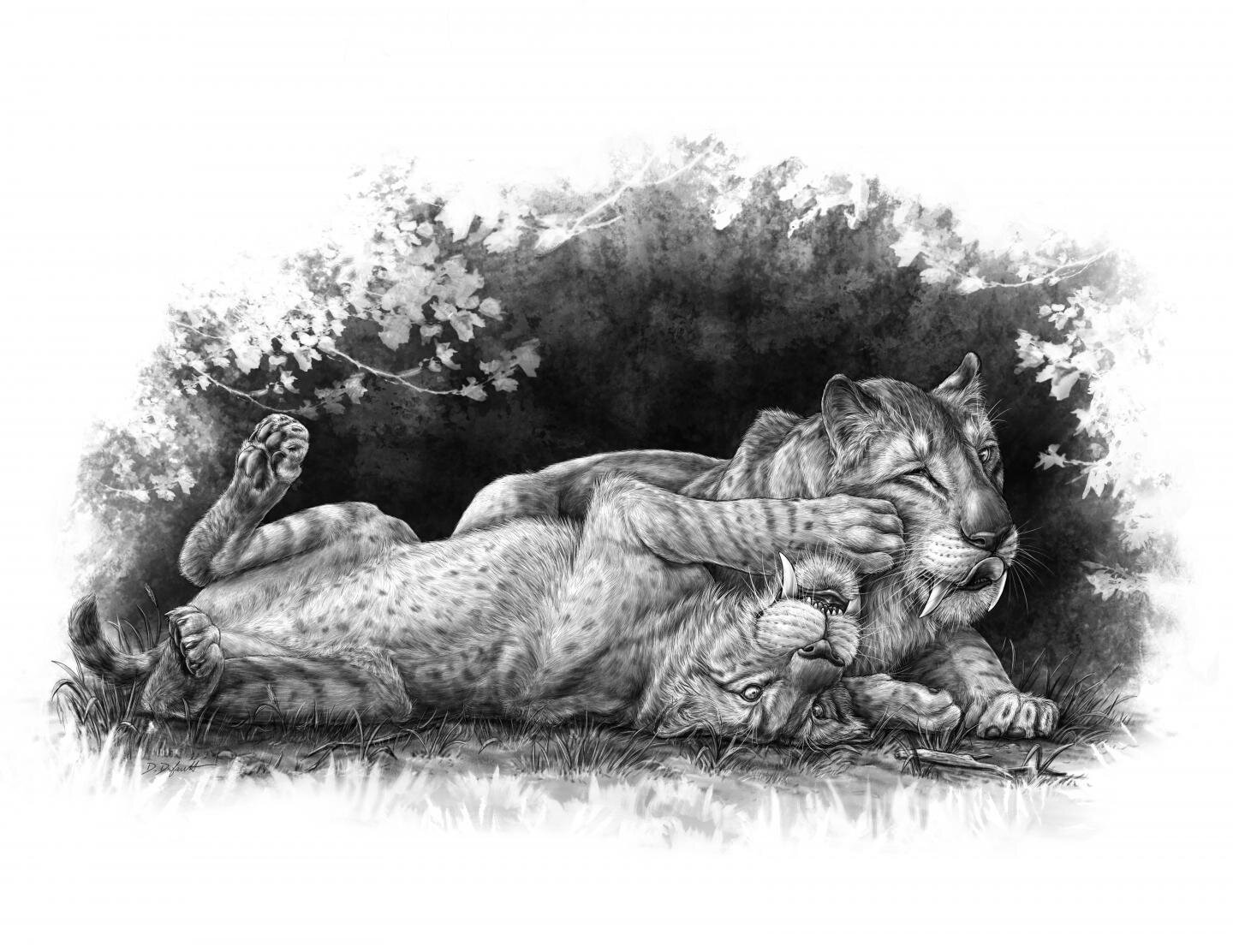 A new study by scientists at the Royal Ontario Museum (ROM) and University of Toronto, published January 7, 2021 in iScience¸ documents a family group of the saber-toothed cats whose remains were discovered in present-day Ecuador. By studying the fossils, collected for the ROM in the early 1960s, the scientists were able to show that while the supersized Ice Age cats grew quite quickly, they also appeared to stay with their mother for longer than some other large cats before forging their own path.

“This study started out as a simple description of previously unpublished fossils,” says Ashley Reynolds, a graduate student based at the Royal Ontario Museum who led the study while completing her Ph.D. research in Ecology & Evolutionary Biology at the University of Toronto. “But when we noticed the two lower jaws we were working on shared a type of tooth only found in about five percent of the Smilodon fatalis population, we knew the work was about to become much more interesting.”

Encouraged by this new discovery, the researchers dug deeper and found that they were likely looking at three related individuals: one adult and two “teenaged” cats. What’s more, they were able to determine that the younger cats were at least two years old at the time of their death, an age at which some living big cats, such as tigers, are already independent.

To support this conclusion, the team studied the preservation and formation of the Ecuadorian site (an area of study called taphonomy), based on historic collecting records and the suite of clues on the fossil bones themselves.

Historically, Smilodon specimens that have largely been collected from “predator trap” deposits, such as the famous La Brea Tar Pits in Los Angeles, California. But the Ecuador deposit, which formed on an ancient coastal plain, is likely derived from a catastrophic mass death event. This means that, unlike the “traps,” all the fossils in the deposit died at the same time. As this preserves a snapshot of an ecosystem, fossils like these can provide new and unique insights into the behavior of extinct species.

“The social lives of these iconic predators have been mysterious, in part because their concentration in tar seeps leaves so much room for interpretation” says Dr. Kevin Seymour, Assistant Curator of Vertebrate Paleontology at the ROM and a co-author of this study, “This historic assemblage of saber-cat fossils from Ecuador was formed in a different way, allowing us to determine the two juveniles likely lived, and died, together—and were therefore probably siblings”

“These world-famous collections made 60 years ago have been studied for years, but a measure of their importance is that they continue to produce new insights into the lives of these extinct animals” says Dr. David Evans, Temerty Chair of Vertebrate Palaeontology at the Royal Ontario Museum and Reynolds’s thesis supervisor.