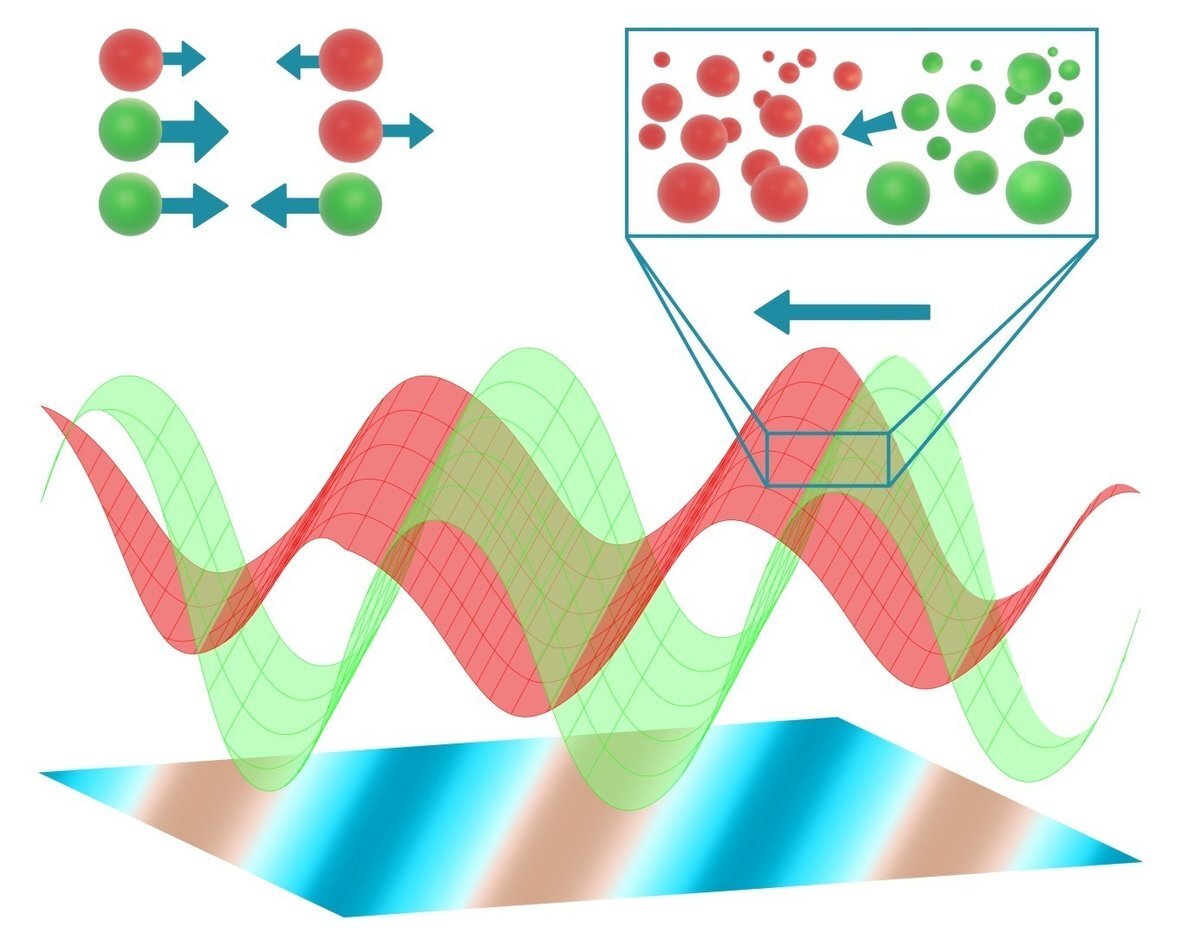 At first glance, a pack of wolves has little to do with a vinaigrette. However, a team led by Ramin Golestanian, Director at the Max Planck Institute for Dynamics and Self-Organization, has developed a model that establishes a link between the movement of predators and prey and the segregation of vinegar and oil. They expanded a theoretical framework that until now was only valid for inanimate matter. In addition to predators and prey, other living systems such as enzymes or self-organizing cells can now be described.

Order is not always apparent at first glance. If you ran with a pack of wolves hunting deer, the movements would appear disordered. However, if the hunt is observed from a bird’s eye view and over a longer period of time, patterns become apparent in the movement of the animals. In physics, such behavior is considered orderly. But how does this order emerge? The Department of Living Matter Physics of Ramin Golestanian is dedicated to this question and investigates the physical rules that govern motion in living or active systems. Golestanian’s aim is to reveal universal characteristics of active, living matter. This includes not only larger organisms such as predators and prey but also bacteria, enzymes and motor proteins as well as artificial systems such as micro-robots. “When we describe a group of such active systems over great distances and long periods of time, the specific details of the systems lose importance. Their overall distribution in space ultimately becomes the decisive characteristic,” explains Golestanian.

From inanimate to living system

His team in Göttingen has recently made a breakthrough in describing living matter. To achieve this, Suropriya Saha, Jaime Agudo-Canalejo, and Ramin Golestanian started with the well-known description of the behavior of inanimate matter and expanded it. The main point was to take into account the fundamental difference between living and inanimate matter. In contrast to inanimate, passive matter, living, active matter can move on its own. Physicists use the Cahn-Hilliard equation to describe how inanimate mixtures such as an emulsion of oil and water separate.

The characterization developed in the 1950s is considered the standard model of phase separation. It is based on the principle of reciprocity: Tit for tat. Oil thus repels water in the same way as water repels oil. However, this is not always the case for living matter or active systems. A predator pursues its prey, while the prey tries to escape from the predator. Only recently has it been shown that there is non-reciprocal (i.e. active) behavior even in the movement of the smallest systems such as enzymes. Enzymes can thus concentrate specifically in individual cell areas—something that is necessary for many biological processes. Following this discovery, the Göttingen researchers investigated how large accumulations of different enzymes behave. Would they mix together or form groups? Would new and unforeseen characteristics arise? With the aim of answering these questions, the research team set to work.

The first task was to modify the Cahn-Hilliard equation to include non-reciprocal interactions. Because the equation describes non-living systems, the reciprocity of passive interactions is deeply embedded in its structure. Thus, every process described by it ends in thermodynamic equilibrium. In other words, all participants ultimately enter a resting state. Life, however, takes place outside the thermodynamic equilibrium. This is because living systems do not remain at rest but rather use energy in order to achieve something (e.g. their own reproduction). Suropriya Saha and her colleagues take this behavior into account by expanding the Cahn-Hilliard equation by a parameter that characterizes non-reciprocal activities. In this way, they can now also describe processes that differ from passive processes to any extent.

Saha and her colleagues used computer simulations to study the effects of the introduced modifications. “Surprisingly, even minimal non-reciprocity leads to radical deviations from the behavior of passive systems,” says Saha. For example, the researcher observed the formation of traveling waves in a mixture of two different types of particles. In this phenomenon, bands of one component chase the bands of the other component, thereby resulting in a pattern of moving stripes. In addition, complex lattices can form in particle mixtures in which small clusters of one component chase groups of the other component. With their work, the researchers hope to contribute to scientific progress in both physics and biology. For example, the new model can describe and predict the behavior of different cells, bacteria, or enzymes. “We have taught an old dog new tricks with this model,” says Golestanian. “Our research shows that physics contributes to our understanding of biology and that the challenges posed by studying living matter open up new avenues for fundamental research in physics.”.

Mathematician refines model of predator-prey relations in the wild

Citation:
New model that describes the organization of organisms could lead to a better understanding of biological processes (2020, October 30)
retrieved 2 November 2020
from https://phys.org/news/2020-10-biological.html