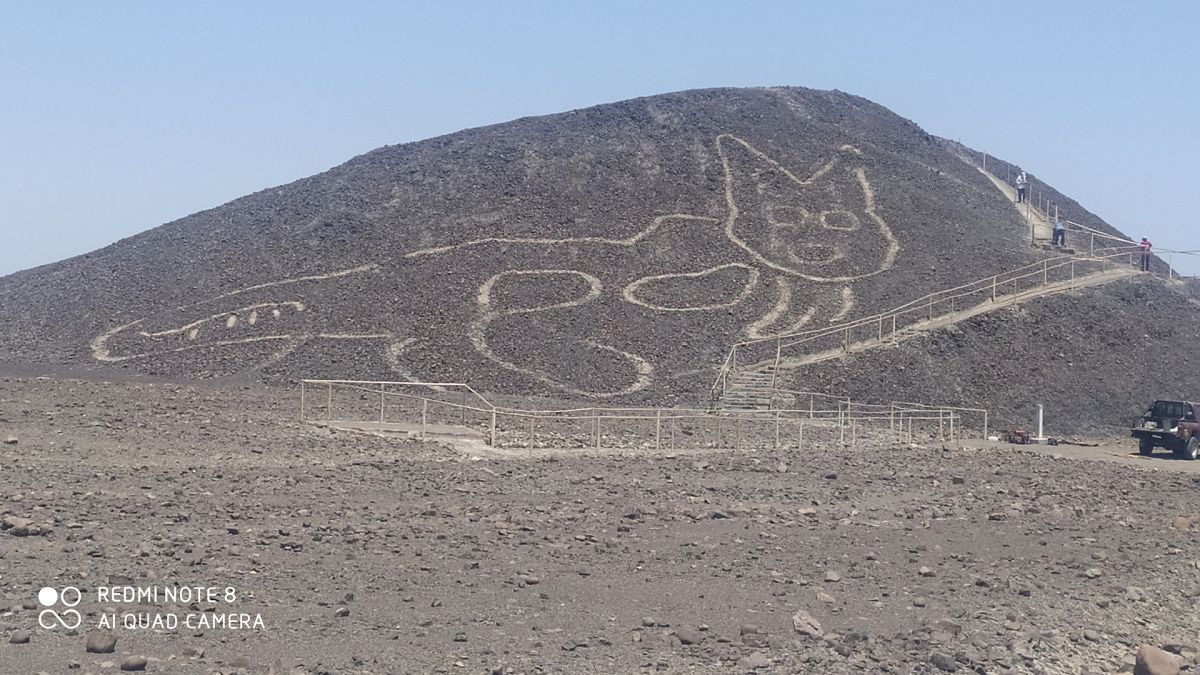 Archaeologists have discovered a gigantic cat geoglyph adorning a hillside in southern Peru, making it the latest of the Nazca Lines — a group of mysterious and enormous human-made outlines of animals, plants and fantastic figures in the desert dating to Pre-Columbian times — to be uncovered in recent years, according to Peru’s Ministry Of Culture.

The kitty, which looks like the most gigantic children’s doodle ever, was found while archaeologists with the Nazca-Palpa Management Plan, which is supported by the Ministry of Culture, were remodeling a natural viewpoint in the Pampa de Nazca, according to an Oct. 15 statement from the ministry.

At first, the workers could barely see the cat, because natural erosion on the hillside had almost erased the ancient feline outline. However, after about a week’s worth of conservation, archaeologists restored the geoglyph, which dates to between about 200 B.C. and 100 B.C., according to the ministry.

Like other Nazca Lines — including a monkey, killer whale, hummingbird and humanoid — the cat is so huge, it’s better seen from above, such as from a plane or drone. The cat’s “lines” are between 12 and 16 inches (30 and 40 centimeters) wide, and the entire feline is about 121 feet (37 meters) long.

The cat’s style — that is, a profile with its head turned toward the viewer — indicates it was made in the Late Paracas period (the Paracas culture predated the Nazca culture, which began in about 100 B.C., Live Science previously reported). In addition, the Paracas culture is well known for its depictions of felines on its ceramics and textiles, the ministry reported.

The Nazca Lines are recognized on the World Heritage list curated by the United Nations Educational, Scientific and Cultural Organization (UNESCO). The majority of the known Nazca Lines date to between 200 B.C. and A.D. 500, but earlier lines, made with piled stones, date as far back as 500 B.C., Live Science previously reported.

In recent years, researchers have found between 80 and 100 previously unknown geoglyphs in the Nazca and Palpa valleys, all of which predate the Nazca culture, archaeologist Johny Isla, the director of the Nazca Lines conservation mission at the Ministry of Culture, told The Guardian. “These are smaller in size, drawn on to hillsides, and clearly belong to an earlier tradition,” he said.

“It might seem surprising that new designs are still being found, but we know there are more out there,” Isla told local press, according to the Evening Standard. “In the last few years, the use of drones, which enable us to take images of the sides of hills, makes that possible.”