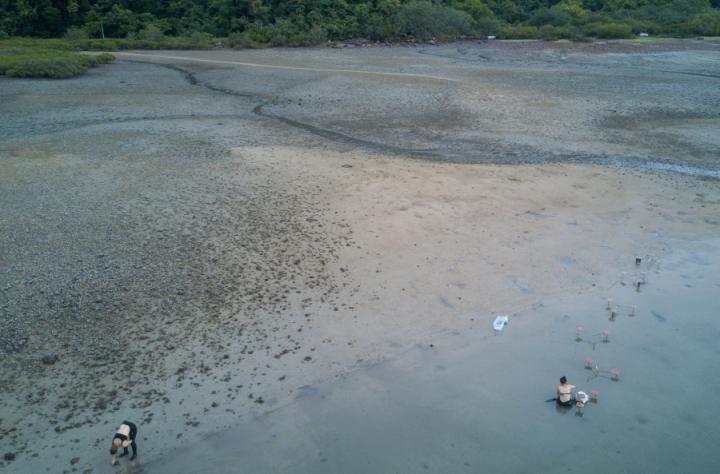 Hong Kong was once home to thriving shellfish reefs, but due to a combination of factors including over-exploitation, coastal reclamation and pollution, shellfish populations have declined drastically. Restoring oyster reefs along urbanized coastlines can mitigate some of the environmental problems typical of coastal development, such as damage from storm surge and loss of biodiversity.

“Globally, we have lost 85% of shellfish reefs, making it the most endangered marine habitat on earth,” said Marine Thomas, Conservation Project Manager, for TNC in Hong Kong. “Most people associate oysters with food, but less well-known is that oysters create reef habitats that support coastal marine life. Only by restoring these lost habitats can we start to bring back some of the associated environmental benefits.”

A primary benefit that healthy oyster reefs contribute to coastal environments is their role as natural water purifiers: This new study found that, just 7 m2 of Hong Kong oyster reef can filter up to one Olympic swimming pool of water each day; a single Hong Kong oyster (Crassostrea hongkongensis) can filter up to 30 liters of water per hour at summer temperatures, among the highest filtration rates recorded of any oyster species.

Even more importantly, oyster reefs provide habitat and nursery grounds for many native species that are otherwise lost from our shores. Another recent SWIMS study conducted in partnership with TNC found that these reefs house six times more species than bare muddy shores. The research found over 80 species on intertidal muddy shores in Deep Bay, 95% of which were found in oyster reefs, and almost 60% of which were exclusively found in those reefs.

“A previous SWIMS study found that Hong Kong is home to approximately 6,000 marine species and 26% of all marine species in China. This new research adds to that list, as we’ve identified a small crab previously not seen in Hong Kong. This shows us just how under-studied these ecosystems are,” said Dr Bayden D Russell, an Associate Director of SWIMS and Associate Professor in the Research Division for Ecology and Biodiversity, HKU.

Another benefit of restored reefs is increased production of commercially and recreationally valuable fish and crabs.

Further, demonstration of successful restoration in one of Asia’s coastal mega-cities can also act as model, providing evidence for the environmental and societal benefits of ecological restoration within the region.

In some parts of the world, oyster reef restoration has only been successful by transplanting juvenile oysters cultivated in hatcheries into the wild. However, this new research demonstrates that natural recruitment of oysters in Hong Kong is high, meaning that restoration could potentially be achieved without the need for hatchery-reared oysters.

“We were excited to find high natural recruitment levels which suggests that oyster reef restoration is possible without hatchery intervention,” said Dr Russell. “We think that this recruitment is because traditional oyster farming in the Pearl River Delta has maintained populations of native oysters in the system in spite of the loss of oyster reefs and these farms could potentially act as a source of larvae.”

In assessing 10 sites where small remnant shellfish habitats are found in Hong Kong, the study also found that large oysters (beyond 1 year old) are very hard to find in the wild, due to on-going harvesting pressures.

“While we are excited by the biological feasibility of restoration, unfortunately the human aspect remains our biggest challenge to bring these habitats back at scale. Shellfish habitats are still severely under protected in Hong Kong, with very little public awareness of their ecological value. Wild harvesting is a huge problem – as soon as oysters or mussels are big enough to eat, someone will harvest them. We are working with Government on gaining more protection and recognition for these important ecosystems and hope to include them in the next Hong Kong Biodiversity Strategy and Action Plan (BSAP),” said Ms Thomas.