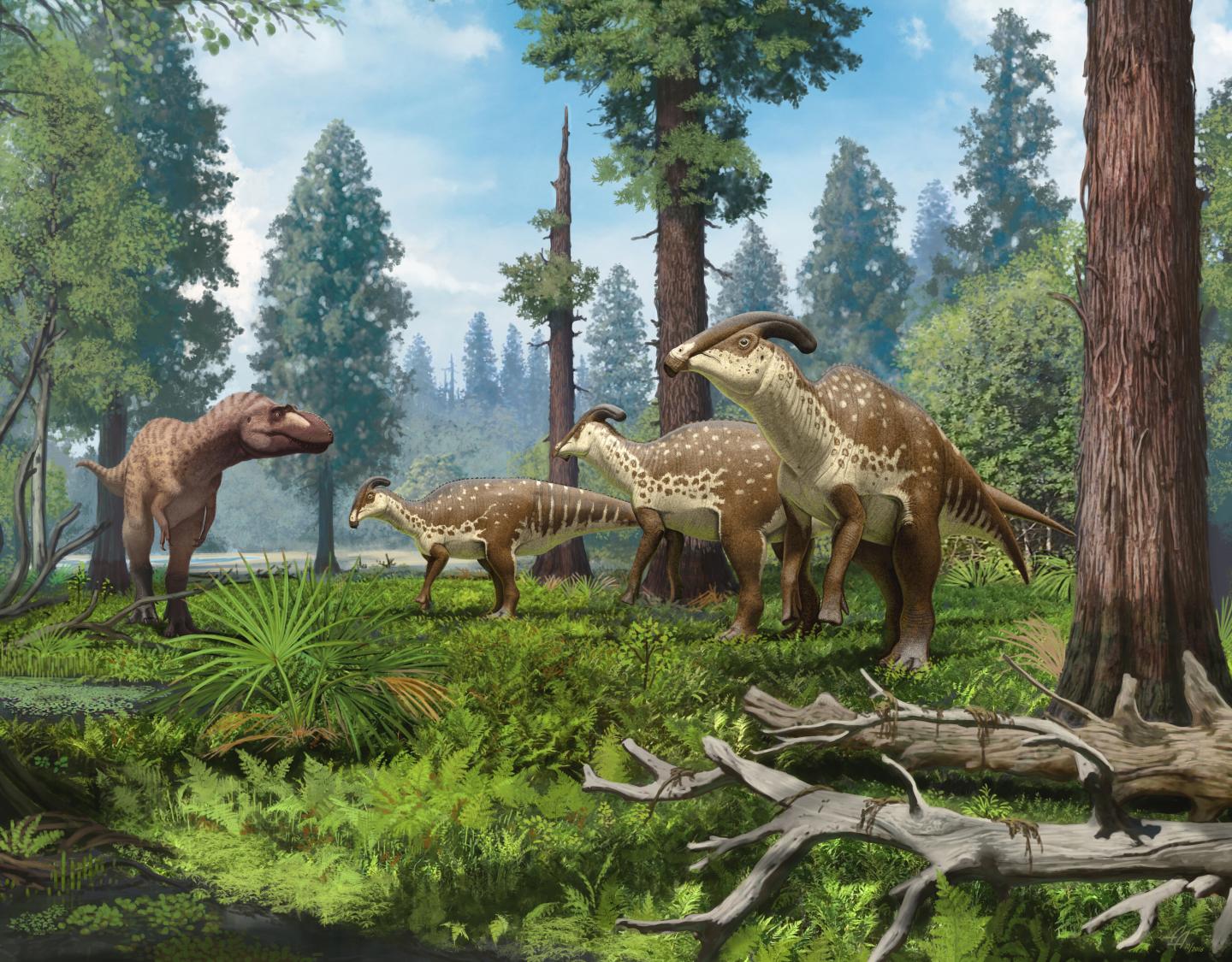 The first new skull of a rare species of the dinosaur Parasaurolophus (recognized by the large hollow tube that grows on its head) discovered in 97 years.

Exquisite preservation of the new skull gives paleontologists their first opportunity to definitively identify how such a bizarre structure grew on this dinosaur.

The locality, in northwestern New Mexico, is dated to about 75 million years ago, a time when North America was divided by a shallow sea and teemed with duckbilled dinosaurs, horned dinosaurs and early tyrannosaurs.

Fossils from the region are part of the natural heritage of the Diné (Navajo Nation) and Puebloan peoples. The new Parasaurolophus fossil, from Bureau of Land Management Wilderness lands in northwestern New Mexico, underscores the importance of protecting public lands as natural laboratories and repositories for scientific discoveries.

Jan. 25–DENVER–The first new skull discovered in nearly a century from a rare species of the iconic, tube-crested dinosaur Parasaurolophus was announced today in the journal PeerJ. The exquisite preservation of the skull, especially the bizarre tube-shaped nasal passage, finally revealed the structure of the crest after decades of disagreement.

Despite its extreme morphology, details of the specimen show that the crest is formed much like the crests of other, related duckbilled dinosaurs. Joe Sertich, curator of dinosaurs at the Denver Museum of Nature & Science and the leader of the team who discovered the specimen said, “This specimen is a wonderful example of amazing creatures evolving from a single ancestor.”

“Imagine your nose growing up your face, three feet behind your head, then turning around to attach above your eyes. Parasaurolophus breathed through eight feet of pipe before oxygen ever reached its head,” said Terry Gates, a paleontologist from North Carolina State University.

“Over the past 100 years, ideas for the purpose of the exaggerated tube crest have ranged from snorkels to super sniffers,” noted David Evans, the Temerty Chair in Vertebrate Palaeontology and Vice President of Natural History at the Royal Ontario Museum. “But after decades of study, we now think these crests functioned primarily as sound resonators and visual displays used to communicate within their own species.”

Among the most recognizable dinosaurs, the duckbilled Parasaurolophus sported an elongate, tube-like crest on its head containing an internal network of airways. Three species of Parasaurolophus are currently recognized, ranging from Alberta to New Mexico in rocks dating between 77 and 73.5 million years old. The new skull belongs to Parasaurolophus cyrtocristatus, previously known from a single specimen collected in the same region of New Mexico in 1923 by legendary fossil hunter Charles H. Sternberg. Both specimens display a shorter, more curved crest than other species, a feature that may be related to their immaturity at death.

The partial skull was discovered in 2017 by Smithsonian Ecology Fellow Erin Spear, Ph.D., while exploring the badlands of northwestern New Mexico as part of a Denver Museum of Nature & Science team. Located deep in the Bisti/De-Na-Zin Wilderness of New Mexico, only a tiny portion of the skull was visible on a steep sandstone slope. Museum volunteers led by Sertich were surprised to find the intact crest as they carefully chiseled the specimen from the sandstone. Abundant bone fragments at the site indicated that much of the skeleton may have once been preserved on an ancient sand bar, but only the partial skull, part of the lower jaw, and a handful of ribs survived erosion.

Today, the badlands of northwestern New Mexico are dry and sparsely vegetated, a dramatic contrast to the lush lowland floodplains preserved in their rocks. 75 million years ago, when Parasaurolophus lived in the region, North America was divided into two landmasses by a broad seaway. Laramidia, the ribbon of land to the west, extended from today’s Alaska to central Mexico, hosting multiple episodes of mountain building in early stages of the construction of today’s Rocky Mountains. These mountain-building events helped preserve diverse ecosystems of dinosaurs along their eastern flanks, some of the best-preserved and most continuous anywhere on Earth. Parasaurolophus shared lush, subtropical floodplains with other, crestless duckbilled dinosaurs, a diverse array of horned dinosaurs, and early tyrannosaurs alongside many emerging, modern groups of alligators, turtles and plants.

“The preservation of this new skull is spectacular, finally revealing in detail the bones that make up the crest of this amazing dinosaur known by nearly every dinosaur-obsessed kid,” said Sertich. “This just reinforces the importance of protecting our public lands for scientific discoveries.”

“My jaw dropped when I first saw the fossil,” said Gates. He continued, “I’ve been waiting for nearly 20 years to see a specimen of this quality.”

“This specimen is truly remarkable in its preservation,” said Evans, who has also worked on this iconic dinosaur for almost two decades. “It has answered long-standing questions about how the crest is constructed and about the validity of this particular species. For me, this fossil is very exciting.”

For decades, the family tree of Parasaurolophus placed the two long, straight-crested species of Parasaurolophus (P. walkeri from Alberta and P. tubicen from younger rocks in New Mexico) as most closely related despite being separated by more than 1,000 miles (1,600 km) and 2.5 million years. Analysis of additional features of the skull excluding the crest, together with information from other Parasaurolophus discoveries from southern Utah, suggest for the first time that all of the southern species from New Mexico and Utah may be more closely related than they are to their northern cousin. This fits patterns observed in other dinosaur groups of the same age, including horned dinosaurs.

The research was funded by the Denver Museum of Nature & Science through generous donations to the Laramidia Project. The paper describing the new skull of Parasaurolophus appears in the January 25, 2021, release of the journal PeerJ.

About the Denver Museum of Nature & Science

The Denver Museum of Nature & Science is the Rocky Mountain Region’s leading resource for informal science education. Our mission is to be a catalyst and ignite the community’s passion for nature and science. The Museum envisions an empowered community that loves, understands and protects our natural world. A variety of engaging exhibits, discussions and activities help Museum visitors celebrate and understand the wonders of Colorado, Earth and the universe. The Museum is located at 2001 Colorado Blvd., Denver, CO, 80205. To learn more about the Museum, visit dmns.org or call 303.370.6000. Many of the Museum’s educational programs and exhibits are made possible in part by the citizens of the seven-county metro area through the Scientific & Cultural Facilities District (SCFD). The Museum is accredited by the American Alliance of Museums. Connect with the Museum on Facebook, Twitter and Instagram.