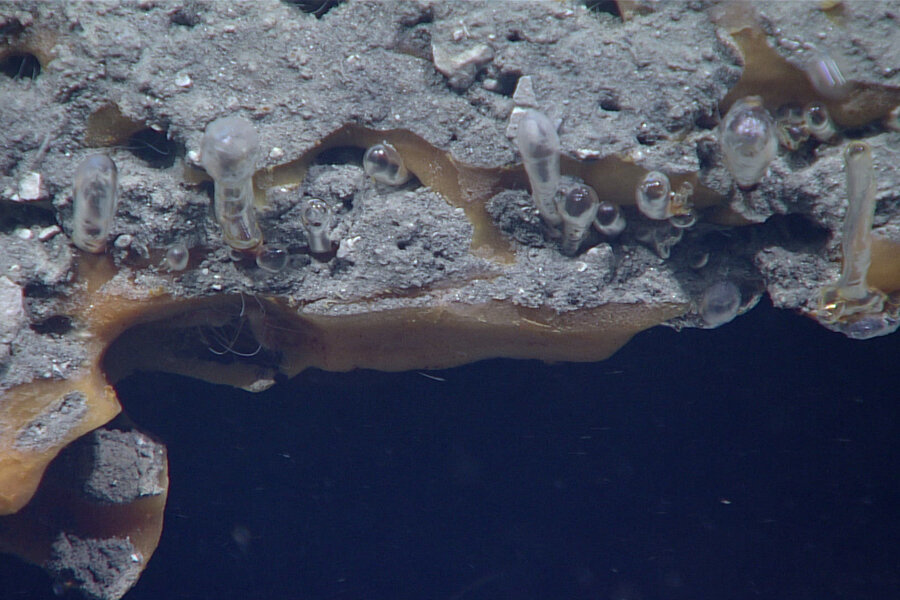 Methane, the main component of natural gas, is the cleanest-burning of all the fossil fuels, but when emitted into the atmosphere it is a much more potent greenhouse gas than carbon dioxide. By some estimates, seafloor methane contained in frozen formations along the continental margins may equal or exceed the total amount of coal, oil, and gas in all other reservoirs worldwide. Yet, the way methane escapes from these deep formations is poorly understood.

In particular, scientists have been faced with a puzzle. Observations at sites around the world have shown vigorous columns of methane gas bubbling up from these formations in some places, yet the high pressure and low temperature of these deep-sea environments should create a solid frozen layer that would be expected to act as a kind of capstone, preventing gas from escaping. So how does the gas get out?

A new study helps explain how and why columns of the gas can stream out of these formations, known as methane hydrates. Using a combination of deep-sea observations, laboratory experiments, and computer modeling, researchers have found phenomena that explain and predict the way the gas breaks free from the icy grip of a frozen mix of water and methane. The findings are reported today in the journal PNAS, in a paper by Xiaojing (Ruby) Fu SM ’15, Ph.D. ’17, now at the University of California at Berkeley; Professor Ruben Juanes at MIT; and five others in Switzerland, Spain, New Mexico, and California.

Surprisingly, not only does the frozen hydrate formation fail to prevent methane gas from escaping into the ocean column, but in some cases it actually facilitates that escape.

Early on, Fu saw photos and videos showing plumes of methane, taken from a NOAA research ship in the Gulf of Mexico, revealing the process of bubble formation right at the seafloor. It was clear that the bubbles themselves often formed with a frozen crust around them, and would float upward with their icy shells like tiny helium balloons.

Later, Fu used sonar to detect similar bubble plumes from a research ship off the coast of Virginia. “This cruise alone detected thousands of these plumes,” says Fu, who led the research project while a graduate student and postdoc at MIT. “We could follow these methane bubbles encrusted by hydrate shells into the water column,” she says. “That’s when we first knew that hydrate forming on these gas interfaces can be a very common occurrence.”

But exactly what was going on beneath the seafloor to trigger the release of these bubbles remained unknown. Through a series of lab experiments and simulations, the mechanisms at work gradually became apparent.

Seismic studies of the subsurface of the seafloor in these vent regions show a series of relatively narrow conduits, or chimneys, through which the gas escapes. But the presence of chunks of gas hydrate from these same formations made it clear that the solid hydrate and the gaseous methane could co-exist, Fu explains. To simulate the conditions in the lab, the researchers used a small two-dimensional setup, sandwiching a gas bubble in a layer of water between two plates of glass under high pressure.

If the gas bubble starts to expand, “what we saw is that the expansion of the gas was able to create enough pressure to essentially rupture the hydrate shell. And it’s almost like it’s hatching out of its own shell,” Fu says. But instead of each rupture freezing back over with the reforming hydrate, the hydrate formation takes place along the sides of the rising bubble, creating a kind of tube around the bubble as it moves upward. “It’s almost like the gas bubble is able to chisel out its own path, and that path is walled by the hydrate solid,” she says. This phenomenon they observed at small scale in the lab, their analysis suggests, is also what would also happen at much larger scale in the seafloor.

That observation, she said, “was really the first time we’ve been aware of a phenomenon like this that could explain how hydrate formation will not inhibit gas flow, but rather in this case, it would facilitate it,” by providing a conduit and directing the flow. Without that focusing, the flow of gas would be much more diffuse and spread out.

As the crust of hydrate forms, it slows down the formation of more hydrate because it forms a barrier between the gas and the seawater. The methane below the barrier can therefore persist in its unfrozen, gaseous form for a long time. The combination of these two phenomena—the focusing effect of the hydrate-walled channels and the segregation of the methane gas from the water by a hydrate layer—”goes a long way toward explaining why you can have some of this vigorous venting, thanks to the hydrate formation, rather than being prevented by it,” says Juanes.

A better understanding of the process could help in predicting where and when such methane seeps will be found, and how changes in environmental conditions could affect the distribution and output of these seeps. While there have been suggestions that a warming climate could increase the rate of such venting, Fu says there is little evidence of that so far. She notes that temperatures at the depths where these formations occur—600 meters (1,900 feet) deep or more—are expected to experience a smaller temperature increase than would be needed to trigger a widespread release of the frozen gas.

Some researchers have suggested that these vast undersea methane formations might someday be harnessed for energy production. Though there would be great technical hurdles to such use, Juanes says, these findings might help in assessing the possibilities.

“The problem of how gas can move through the hydrate stability zone, where we would expect the gas to be immobilized by being converted to hydrate, and instead escape at the seafloor, is still not fully understood,” says Hugh Daigle, an associate professor of petroleum and geosystems engineering at the University of Texas at Austin, who was not associated with this research. “This work presents a probable new mechanism that could plausibly allow this process to occur, and nicely integrates previous laboratory observations with modeling at a larger scale.”

“In a practical sense, the work here takes a phenomenon at a small scale and allows us to use it in a model that only considers larger scales, and will be very useful for implementing in future work,” Daigle says.