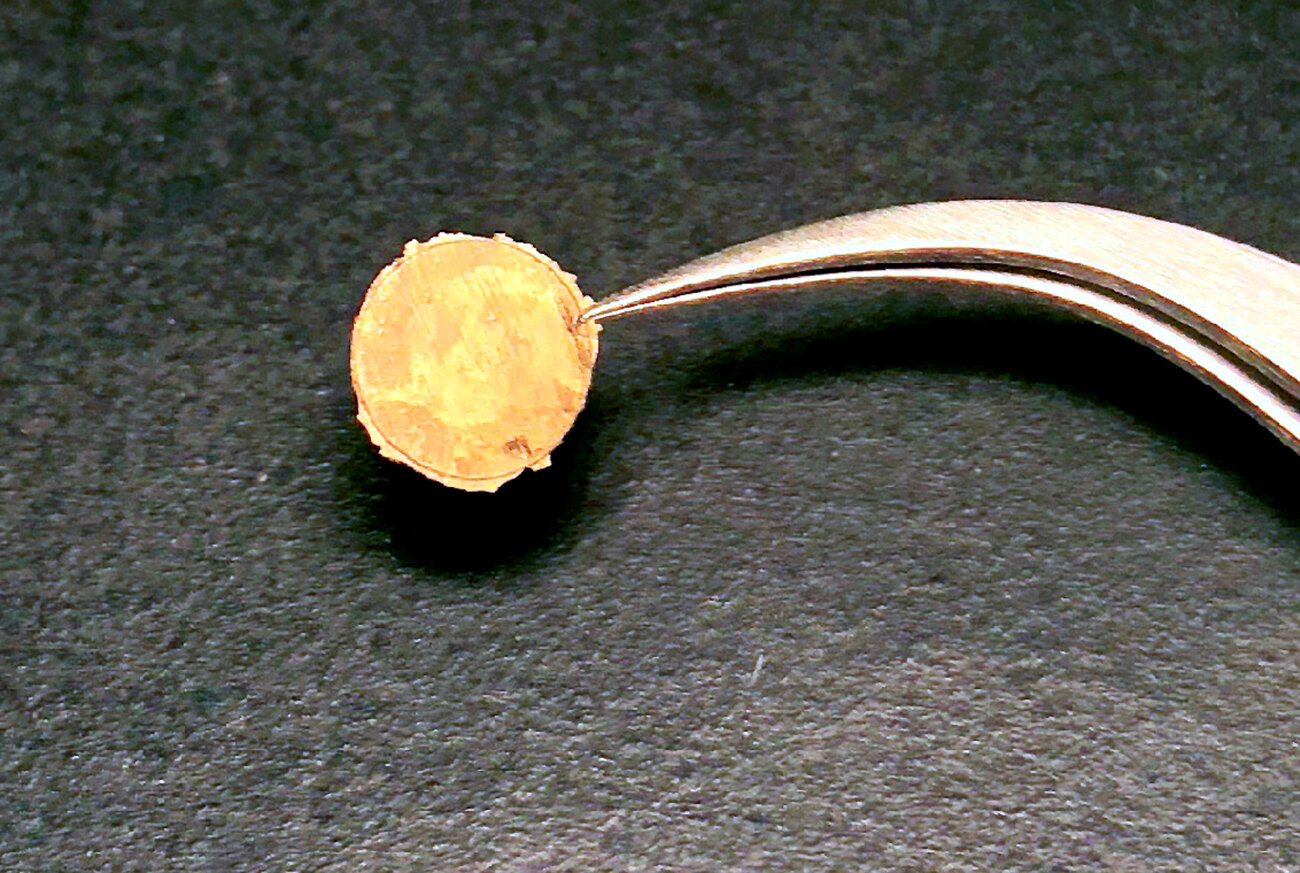 Metallurgists have all kinds of ways to make a chunk of metal harder. They can bend it, twist it, run it between two rollers or pound it with a hammer. These methods work by breaking up the metal’s grain structure—the microscopic crystalline domains that form a bulk piece of metal. Smaller grains make for harder metals.

Now, a group of Brown University researchers has found a way to customize metallic grain structures from the bottom up. In a paper published in the journal Chem, the researchers show a method for smashing individual metal nanoclusters together to form solid macro-scale hunks of solid metal. Mechanical testing of the metals manufactured using the technique showed that they were up to four times harder than naturally occurring metal structures.

“Hammering and other hardening methods are all top-down ways of altering grain structure, and it’s very hard to control the grain size you end up with,” said Ou Chen, an assistant professor of chemistry at Brown and corresponding author of the new research. “What we’ve done is create nanoparticle building blocks that fuse together when you squeeze them. This way we can have uniform grain sizes that can be precisely tuned for enhanced properties.”

For this study, the researchers made centimeter-scale “coins” using nanoparticles of gold, silver, palladium and other metals. Items of this size could be useful for making high-performance coating materials, electrodes or thermoelectric generators (devices that convert heat fluxes into electricity). But the researchers think the process could easily be scaled up to make super-hard metal coatings or larger industrial components.

The key to the process, Chen says, is the chemical treatment given to the nanoparticle building blocks. Metal nanoparticles are typically covered with organic molecules called ligands, which generally prevent the formation of metal-metal bonds between particles. Chen and his team found a way to strip those ligands away chemically, allowing the clusters to fuse together with just a bit of pressure.

The metal coins made with the technique were substantially harder than standard metal, the research showed. The gold coins, for example, were two to four times harder than normal. Other properties like electrical conduction and light reflectance were virtually identical to standard metals, the researchers found.

The optical properties of the gold coins were fascinating, Chen says, as there was a dramatic color change when the nanoparticles were compressed into bulk metal.

“Because of what’s known as the plasmonic effect, gold nanoparticles are actually purplish-black in color,” Chen said. “But when we applied pressure, we see these purplish clusters suddenly turn to a bright gold color. That’s one of the ways we knew we had actually formed bulk gold.”

In theory, Chen says, the technique could be used to make any kind of metal. In fact, Chen and his team showed that they could make an exotic form of metal known as a metallic glass. Metallic glasses are amorphous, meaning they lack the regularly repeating crystalline structure of normal metals. That gives rise to remarkable properties. Metallic glasses are more easily molded than traditional metals, can be much stronger and more crack-resistant, and exhibit superconductivity at low temperatures.

“Making metallic glass from a single component is notoriously hard to do, so most metallic glasses are alloys,” Chen said. “But we were able to start with amorphous palladium nanoparticles and use our technique to make a palladium metallic glass.”

Chen says he’s hopeful that the technique could one day be widely used for commercial products. The chemical treatment used on the nanoclusters is fairly simple, and the pressures used to squeeze them together are well within the range of standard industrial equipment. Chen has patented the technique and hopes to continue studying it.

“We think there’s a lot of potential here, both for industry and for the scientific research community,” Chen said.