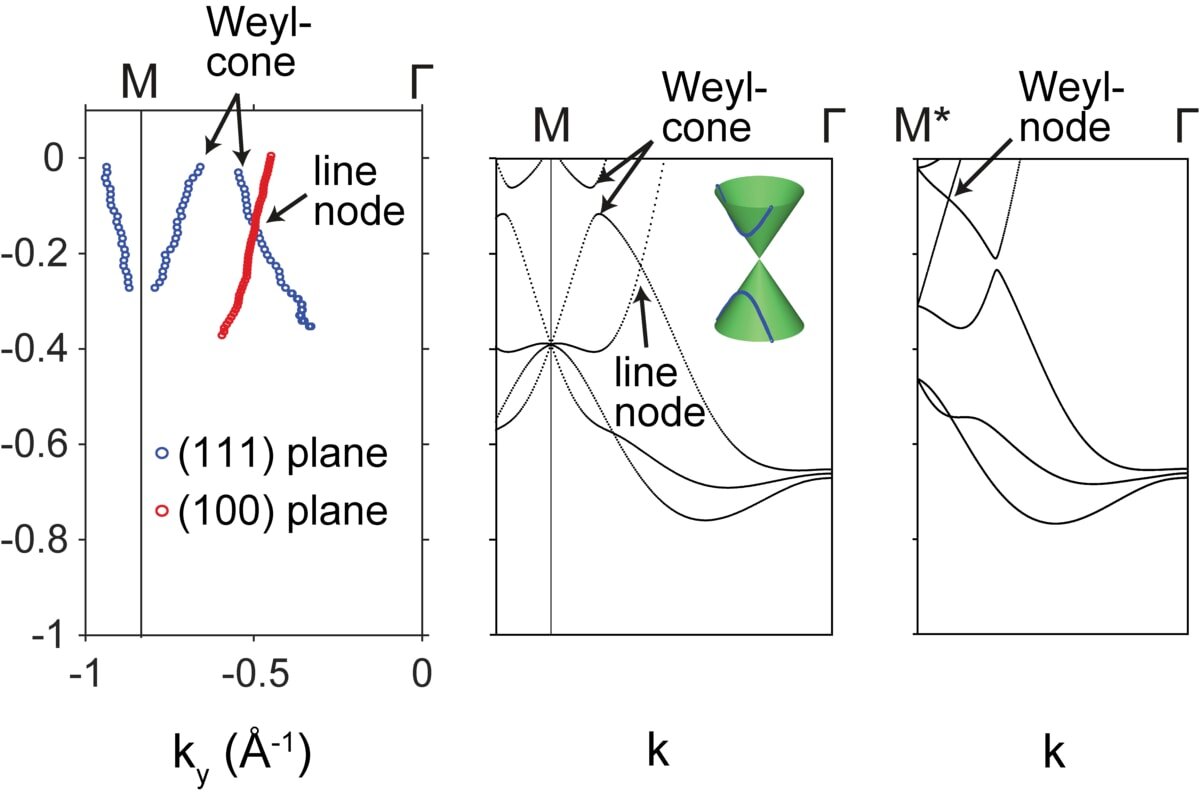 Leading a collaboration of institutions in the U.S. and abroad, the Princeton University Department of Chemistry is reporting new topological properties of the magnetic pyrite Cobalt disulfide (CoS2) that expand our understanding of electrical channels in this long-investigated material.

Using angle-resolved photoelectron spectroscopy and ab-initio calculations, researchers working with the Schoop Lab discovered the presence of Weyl nodes in bulk CoS2 that allow them to make predictions about its surface properties. The material hosts Weyl-fermions and Fermi-arc surface states within its band structure, which may enable it to serve as a platform for exotic phenomena and places it among materials candidates for use in spintronic devices.

Leslie Schoop, assistant professor of chemistry at Princeton Chemistry, called the work “a rediscovery of new physics in an old material.” The research was published this week in Science Advances.

CoS2 has been a subject of study for many decades because of its itinerant magnetism, and since the early 2000s—before topological insulators were predicted and discovered—because of its potential to be a half-metal. Researchers were “happy” to put the latter discussion to rest.

Through the Schoop research, the material was discovered to be a rare example of that group of magnetic topological metals proposed as agents of charge-to-spin conversion. By disentangling the bulk and surface electronic structure of CoS2, researchers have demonstrated that there is a relationship between electronic channels in the inner material that can predict other states at its surface. In a material, an electrical current can go through the bulk or flow along the surface. Researchers found that bulk CoS2 contains objects called Weyl nodes within its structure that serve as electronic channels that can predict other states at the surface.

“The beautiful physics here is you have these Weyl nodes that demand spin-polarized surface states. These may be harvested for spintronic applications,” said Schoop.

“These electronic states that only exist at the surface have chirality associated with them, and because of that chirality the electrons can also only move in certain directions,” she added. “Some people think about using these chiral states in other applications. There aren’t many magnetic materials where these have been found before.”

Chirality refers to that property that makes an object or system indistinguishable from its mirror image—i.e. not superimposable—and is an important property in many branches of science.

Schoop added that the electronic channels are polarized. This magnetism could potentially be used to manipulate the material: scientists can switch the magnetization direction and surface states could then be reconfigured as a response to this applied magnetic field.

Paper co-author Maia Vergniory, of the Donostia International Physics Center in Spain, added, “There are just a very few magnetic materials that have been measured to have such surface states, or Fermi arcs, and this is like the fourth, right? So, it’s really amazing that we could actually measure and understand the spinchannels in a material that was known for so long.”

As colleagues in 2016, Schoop and Vergniory discussed investigating the material properties of CoS2, particularly whether it could be classified as a true half-metal. The investigation went through several iterations after Schoop arrived at Princeton in 2017, and was worked on by graduate students under Schoop and under Vergniory at Donostia.

Niels Schröter, a colleague at the Paul Scherrer Institute in Switzerland and lead author on the paper, oversaw the team at the Swiss Light Source that mapped out the material Weyl nodes.

“What we wanted to measure was not just the surface electronic structure,” said Schröter. “We also wanted to learn something about the bulk electronic properties, and in order to get both of these complementary pieces of information, we had to use the specialized ADRESS beamline at the Swiss Light Source to probe electrons deep in the bulk of the material.”

Schröter explained how engineers might build a device down the road using this material.

“You would put this material in contact with another material, for instance with a magnetic insulator or something like that in which you then want to create magnetic waves by running an electric current through it.

“The beauty of these topological materials is that these interfacial electrons that may be used for spin-injection, they are very robust. You cannot easily get rid of them. This is where these fields of topology and spintronics may meet, because topology is maybe a way to ensure that you have these spin-polarized interface states in contact with other magnetic materials that you would like to control with currents or fields.”

Schoop added, “I think that this kind of rediscovery in this very old and well-studied material is very exciting, and I’m glad I have these two amazing collaborators who helped nail it down.”