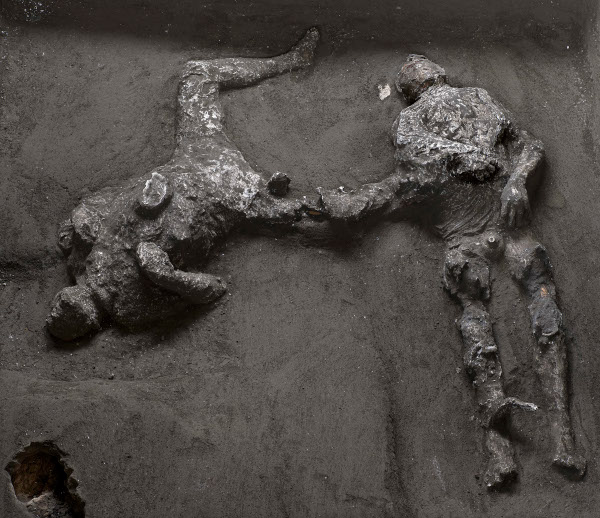 More than 150 years after the first remains of the victims of the Mount Vesuvius eruption were discovered, scientists have found two more bodies in the ruins near Pompeii.

The two individuals were men, one in his late teens or early 20s and one in his 30s. Both apparently died trying to flee a suburban villa as a torrent of hot ash and gases called pyroclastic flow buried the region.

The bones of the victims were removed and analyzed, and then the voids within the hardened ash where the bones had rested were scanned with a laser. Finally, archaeologists poured plaster within the human-shaped spaces, creating casts of the two dead men. These casts show details such as the folds of the woolen tunics worn by the victims.

The villa sits in a site called Civita Giuliana, which is about 0.4 miles (0.7 kilometers) northwest of Pompeii. It was originally explored in 1907, and illegal excavations since then have uncovered a series of rooms and terraces. Starting in 2017, archaeologists began a new round of excavations, in part to protect the site from trophy-hunters and grave robbers. In 2018, they discovered the remains of a horse that died in its stable, buried by pyroclastic flow.

The new bodies were found in a side room of a cryptoporticus, or covered walkway, in the main part of the villa. This semi-underground hallway consisted of arches that would have held up the rooms above. The two men died side-by-side in an L shape, with one man’s feet nearly touching the other’s shoulders. The younger man was about 5 feet, 1 inch tall (156 centimeters). His vertebrae were compressed, indicating a life of heavy labor; it’s possible he was a slave. He wore a short tunic, probably made of wool.

The older man was about 5 feet, 4 inches tall (163 cm) and wore a tunic and woolen mantle. Near the victims were other voids, which held not bodies, but objects. Their shapes indicated that they were likely bundles of cloth, perhaps carried by the two men as they tried to flee.

The timeline at Civita Guiliana

The men had likely been through a harrowing day and night before they died. In A.D. 79, likely on Oct. 24 at around 1 p.m. local time, pumice began to rain from the sky as Mount Vesuvius rumbled, according to the team led by Italian archaeologist Luana Toniolo. This rain of rock continued until about 7 a.m. the next morning. Rock layers show an initial deposit of white pumice, followed by a layer of grey pumice.

Then the eruption shifted; a rush of pyroclastic flow swept down Vesuvius’ slopes at around 7 a.m., flooding Pompeii with a few centimeters of ash. This first flow was relatively slow and not strong enough to destroy buildings.

Likely, many survived these first two phases. But residents were doomed by the second pyroclastic flow, which hit perhaps half an hour after the first. This flow collapsed walls as it buried Pompeii and neighboring Herculaneum. Some victims were likely killed by the intense heat of the pyroclastic plume, hot enough to turn brain tissue to glass. Others probably died by inhaling toxic gases or simply by being crushed by the flow. There were several more pyroclastic surges throughout that morning. The new victims at Civita Guiliana were buried under at least 6.5 feet (2 meters) of hardened ash. They were completely engulfed, meaning that the devastating second pyroclastic flow killed them at once.

The excavations at Civita Guiliana have revealed two bedrooms decorated with stone mosaics, and a large banquet room with marble floors. The room where the two bodies were found allowed access from the lower-level cryptoporticus to the upper floor. Toniolo and the rest of the scientific team are using lasers to scan the excavated villa and create a digital map of the site.