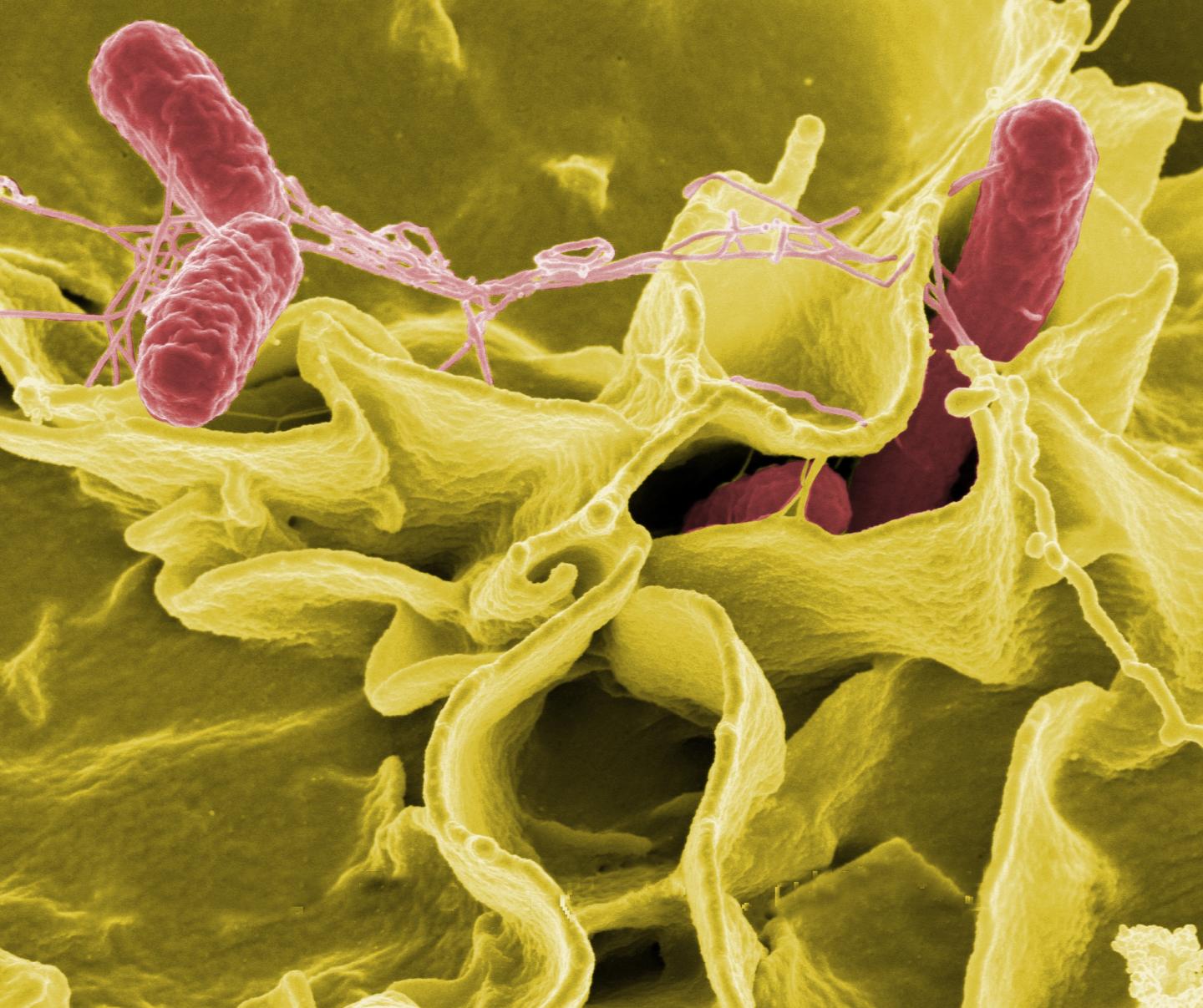 Salmonella enterica serovar Typhimurium bacteria (S. Typhimurium) commonly cause human gastroenteritis, inflammation of the lining of the intestines. The bacteria live inside the gut and can infect the epithelial cells that line its surface. Many studies have shown that Salmonella use a “run-and-tumble” method of short swimming periods (runs) punctuated by tumbles when they randomly change direction, but how they move within the gut is not well understood.

National Institutes of Health scientists and their colleagues believe they have identified a S. Typhimurium protein, McpC (Methyl-accepting chemotaxis protein C), that allows the bacteria to swim straight when they are ready to infect cells. This new study, published in Nature Communications, describes S. Typhimurium movement and shows that McpC is required for the bacteria to invade surface epithelial cells in the gut.

The study authors suggest that McpC is a potential target for developing new antibacterial treatments to hinder the ability of S. Typhimurium to infect intestinal epithelial cells and colonize the gut. National Institute of Allergy and Infectious Diseases scientists at Rocky Mountain Laboratories in Hamilton, Montana, led the study. Collaborators included groups from the University of Texas A&M campuses in College Station and Kingsville.

S. Typhimurium use flagella–long whip-like projections–to move through fluids. When the flagella rotate counterclockwise, they form a rotating bundle behind the bacteria and propel them forward. However, the flagella frequently switch rotation from counterclockwise to clockwise, disrupting the bundle and causing the bacteria to tumble and change direction. Using special microscopes and cameras to observe live S. Typhimurium, the scientists found that bacteria grown under conditions that activate their invasive behavior swam in longer straight runs because the flagella did not switch rotation from counterclockwise to clockwise. Bacteria lacking McpC still demonstrated the “run-and-tumble” method of swimming under these conditions and had an invasion defect in a calf intestine model, indicating that straight swimming is important for efficient invasion of intestinal epithelial cells.

The researchers hypothesize that controlled smooth swimming could be a widespread bacterial infection strategy. Similar smooth swimming behavior can be seen in unrelated enteric bacteria, such as Vibrio, which can cause infection when undercooked seafood is eaten. These findings may inform the development of novel antibiotics.

NIAID conducts and supports research–at NIH, throughout the United States, and worldwide–to study the causes of infectious and immune-mediated diseases, and to develop better means of preventing, diagnosing and treating these illnesses. News releases, fact sheets and other NIAID-related materials are available on the NIAID website.

About the National Institutes of Health (NIH):

NIH, the nation’s medical research agency, includes 27 Institutes and Centers and is a component of the U.S. Department of Health and Human Services. NIH is the primary federal agency conducting and supporting basic, clinical, and translational medical research, and is investigating the causes, treatments, and cures for both common and rare diseases. For more information about NIH and its programs, visit http://www.nih.gov/.