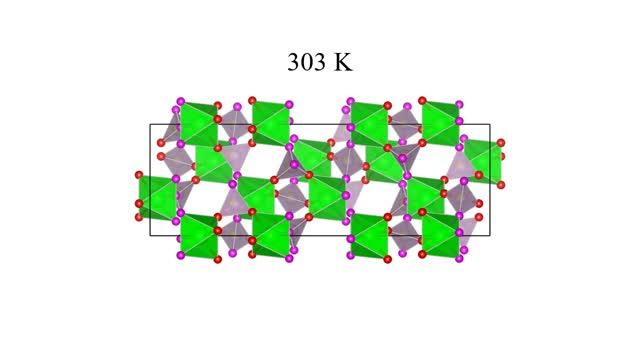 Scientists at Tokyo Institute of Technology recently synthesized a novel material that displays unique thermal expansion properties. The method used by the scientists enables the production of a unique crystalline oxide containing zirconium, sulfur, and phosphorus, that exhibits two distinct mechanisms of negative thermal expansion. This is the first known material to show this property and its application may help avoid damage to composite materials, such as computer chip components, facing unexpected temperature changes.

Most materials tend to expand when heated, as the atoms move apart. The expansibility of materials under heat is measured using the coefficient of thermal expansion (CTE). Most of the current industry-grade materials have a positive CTE, making them perform poorly when subjected to more ‘extreme’ temperatures. However, some materials experience the opposite effect, shrinking at higher temperatures. This unusual process, known as negative thermal expansion, may help solve the problem of heat damage to composite materials.

A team of scientists at the Tokyo Institute of Technology led by Associate Prof. Toshihiro Isobe has been researching materials with negative CTE. As Dr. Isobe explains, “Negative thermal expansion behavior can be primarily attributed to two types of mechanisms, phase transition and framework-type mechanism.” Both these mechanisms have found industrial application as both have pros and cons. Phase transition-type materials have large negative CTEs but narrow usable temperature ranges, which limits their operational use, particularly as fillers in composite materials. Framework-type materials, on the other hand, show thermal shrinkage over a wide temperature range, but because they have small absolute CTE values, they are required in large quantities to achieve the desired result. For years, scientists have been searching for a suitable compromise between the two, but materials able to undergo both mechanisms of negative thermal expansion have never been reported, until now.

In their new study, published in NPG Asia Materials, Dr. Isobe and his team report a method to synthesize a novel crystalline oxide made of zirconium, sulfur, and phosphorus, and describe its characteristics. This crystal, the chemical formula for which is Zr2SP2O12, is described by Dr. Isobe as “a negative CTE material which displays both transition- and framework-type mechanisms when heated.”

The scientists found that, while Zr2SP2O12 exhibits both mechanisms of negative thermal mechanism mentioned earlier, one might be dominant at a given temperature. For instance, between 393K (roughly 120°C) and 453K (roughly 180°C), the material shrunk rapidly and some of the structural units were deformed, which indicates a phase transition. However, above and below this temperature range, the contraction was not as pronounced, and the researchers instead observed small changes in the length and angle of bonds between atoms, a characteristic of framework-type mechanism.

The researchers also noted an interesting phenomenon. They found that the crystals containing fewer sulfur atoms in the lattice were more easily deformed during the phase transition (120-180°C), resulting in a larger contraction of the material (higher negative CTE). This can help in producing Zr2SP2O12 crystals with the desired CTE for specific applications.

This novel crystalline material and the mechanism of its production could pave the way for the synthesis of compounds with a similar dual mechanism. This way, material engineers would be able to select compounds with specific properties to tailor the performance of manufactured materials to specific operational conditions.

About Tokyo Institute of Technology

Tokyo Tech stands at the forefront of research and higher education as the leading university for science and technology in Japan. Tokyo Tech researchers excel in fields ranging from materials science to biology, computer science, and physics. Founded in 1881, Tokyo Tech hosts over 10,000 undergraduate and graduate students per year, who develop into scientific leaders and some of the most sought-after engineers in industry. Embodying the Japanese philosophy of “monotsukuri,” meaning “technical ingenuity and innovation,” the Tokyo Tech community strives to contribute to society through high-impact research.