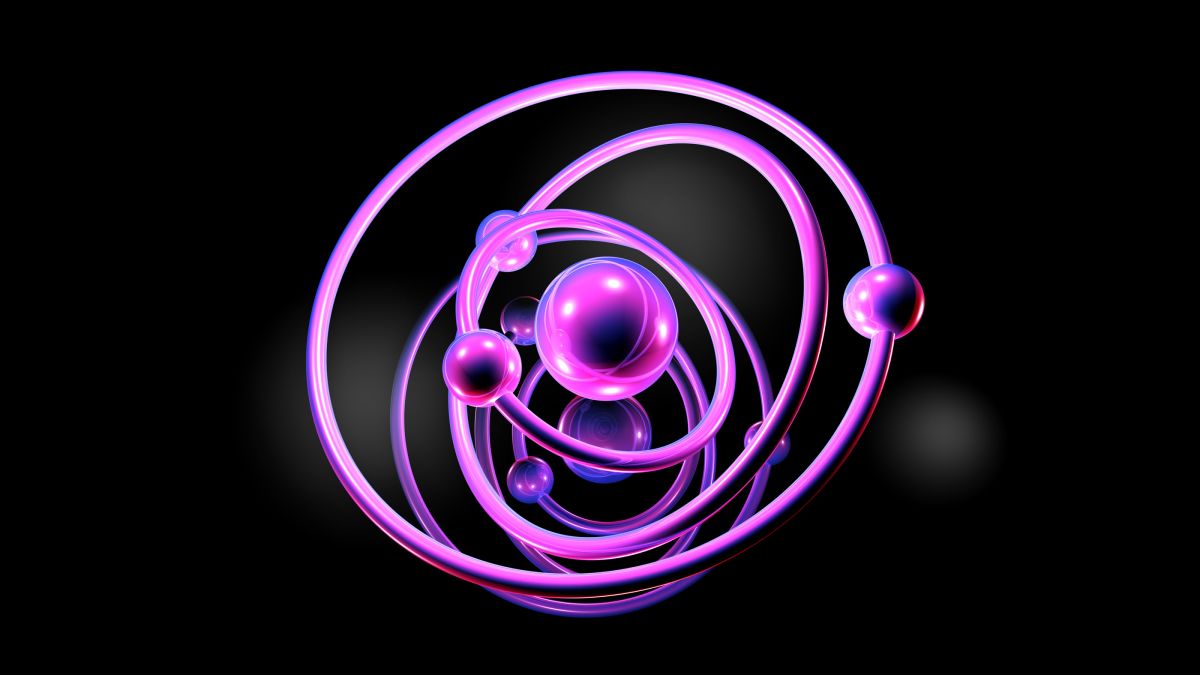 A previously unknown quantum particle — equivalent to a neutral electron — may have been found in a new state of matter.

The chargeless oddball wouldn’t be one of the fundamental building blocks of matter, however. Rather, it would be a quasiparticle that emerges from the collective behavior of a material only when conditions are right. In the new study, those conditions were observed in sheets of a semi-metallic crystal that exhibited some strange electro-magnetic behavior.

“If our interpretations are correct, we are seeing a fundamentally new form of quantum matter,” Princeton University physicist Sanfeng Wu said in a statement. Wu is the senior author of a new study describing the discovery Jan. 4 in the journal Nature.

He and his colleagues were following up based on hints in previous experiments of the strange behavior of a thin sheet of the crystalline material tungsten ditelluride. The material conducts electricity like a metal in bulk, but it’s a strong insulator as a “monolayer” — a layer that’s just one atom thick — because the mobile electrons of a current are blocked by its fixed electrons, which become much stronger in a so-called “two-dimensional” sheet, Wu told Live Science in an email.

As part of their investigations, the researchers exposed the monolayer to a variable magnetic field at low temperatures, where quantum effects become more pronounced, and measured how it resisted an electric current. (Magnetism and electricity are intimately related; when a magnetic field changes strength, electrons begin to flow, while flowing electrons generate a magnetic field.)

Wu explained that the quantum oscillations occur because the material’s electrons are shifting between their normal classical state and the quantum mechanical states caused by their circular motion in the magnetic field — effectively a type of quantum “superposition” where an electron can occupy several different states at once.

But insulators do not show quantum oscillations; and so Wu and his colleagues were surprised to see that the resistivity of the tungsten ditelluride monolayer began to oscillate as the magnetic field was increased — the distinctive behavior of a metal.

“This came as a complete surprise,” he said. “We asked ourselves, ‘What’s going on here?’ We don’t fully understand it yet.”

Journey from our early beginnings as a species, exploring how we came to be and how our immune systems, emotions and even fears developed. Meet some of science’s greatest minds and discover how vaccines were created, the illumination of the light spectrum and how we explain phenomena from “vampires” to out-of-body experiences. Explore the power behind nuclear fusion and the endless possibilities offered by quantum mechanics and more in the “Book of Incredible Science”.View Deal

Physicists discovered quantum oscillation almost a century ago. Metals usually have low resistivity — their outermost electrons are not tightly bound within their parent atoms, so metals allow mobile electrons to flow and conduct electric current.

In early experiments, researchers would expose a metal to a magnetic field at super-low temperatures, and found that the material’s resistivity would first increase and then begin to switch between higher and lower levels.

It’s now known that a strong-enough magnetic field causes the electrons in a metal to shift between their normal classical state and their circular quantum mechanical states, causing the oscillations in the metal’s resistivity; and quantum oscillations have become a standard tool for characterizing many of the properties of metals, Wu said.

In contrast, the electrons in insulating materials cannot move, so they do not conduct electric current well and have very high resistivity. Insulators usually show no quantum oscillations, no matter how strong the magnetic field.

So the quantum oscillations observed in the supposedly-insulating monolayer of tungsten ditelluride were unexpected, Wu said.

Modern physics doesn’t explain the discovery, Wu said, and he and his team hypothesize that the observed oscillations are caused by a previously unknown form of quantum matter.

They think the quantum oscillations could be explained by “quasiparticles,” never seen before, that arise from the fixed electrons when the tungsten ditelluride monolayer is exposed to a strong-enough magnetic field. And they suggest this quasiparticle is a “neutral fermion” — the equivalent of an electron, but without an electrical charge.

Normal charged fermions are either negatively charged electrons or the positively charged “holes” that are perceived as the flow of current in a metal — the electrons are actually flowing in the opposite direction from the current.

But the researchers think their neutral fermions could exist and be mobile in an insulator, causing interactions between a current and the neutral particles that emerge from the fixed electrons that can be detected as quantum oscillations.

“Here the charge-neutral fermions are an emergent particle, due to the collective behavior of a strongly interacting, many-electron system,” Wu said. “So this is not [one of] the elementary particles in the Standard Model,” he said, referring to the model that governs the sometimes bizarre world of particle physics.

They are now planning ways to test their hypothesis of “neutral fermions” in tungsten ditelluride, and they’re looking for other insulators that also develop quantum oscillations, he said.

“It is hard to imagine future applications at this stage, but I’m sure it will be related to our future quantum technologies,” Wu said. In the same way, “it was hard to imagine modern electronics when an electron was first seen.”

Wu’s team prepared their monolayers of tungsten ditelluride by progressively “shaving” a flake of it ever more thinly with regular sticky tape.

Although it sounds simple, this so-called “scotch tape method” is commonly used to create monolayers of suitable materials and led to the discovery of “two-dimensional” materials like graphene, which was awarded the Nobel Prize for Physics in 2010.