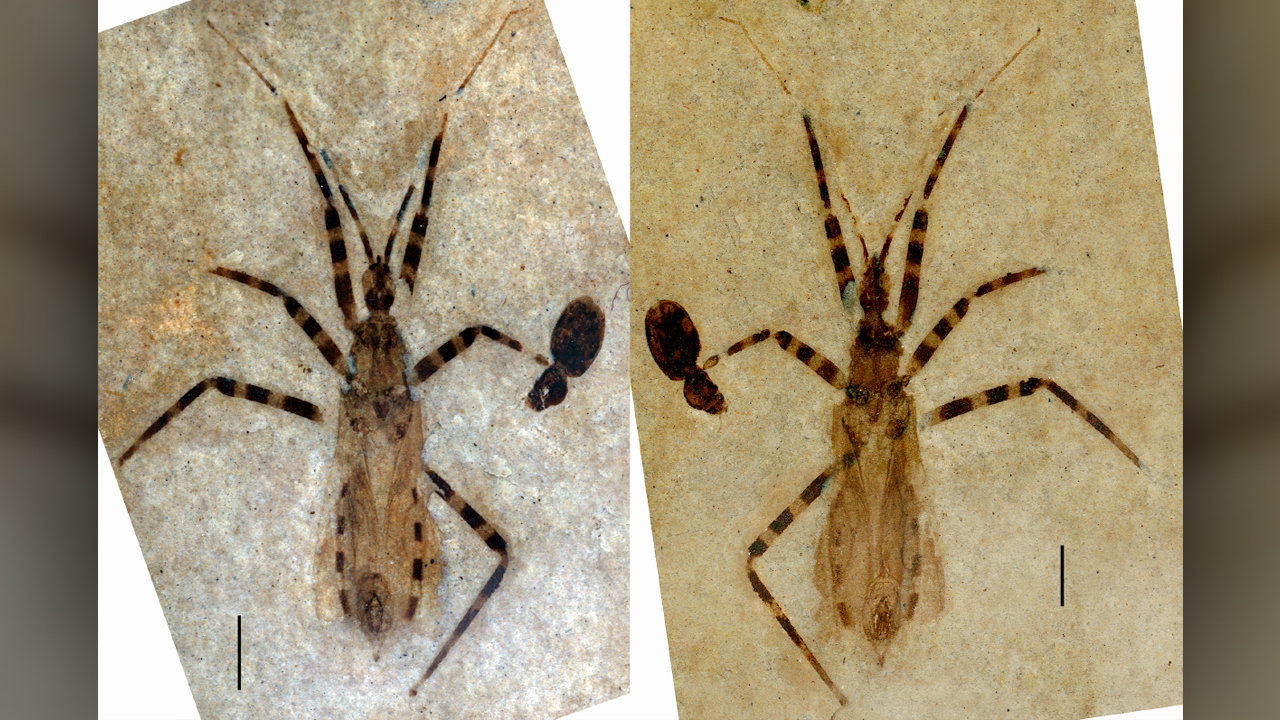 The broken parts of a tiny Cretaceous insect’s minuscule genitals were recently put back together after spending more than a decade apart.

Researchers have described a new species of assassin bug from a remarkably well-preserved fossil dating to around 50 million years ago. At the time of the fossil’s discovery in Colorado in 2006, it was split down the middle; when the rock around it was cracked in two, each half held half of the insect’s body. The division was near-perfect, but a tiny structure called a pygophore — the male insect’s genital capsule, about the size of a rice grain — was broken in such a way that its original shape was obscured, the scientists revealed in a statement.

A fossil dealer then sold the two pieces to different buyers. But when researchers united the fossil halves and analyzed them together, their view of the genitalia in its entirety enabled them to identify the bug as a newfound species, they reported in a new study.

Assassin bugs are highly successful predatory insects with about 7,000 recognized species but only about 50 known fossils, said lead study author Daniel Swanson, a graduate student in entomology at the University of Illinois Urbana-Champaign (UIUC).

“This just speaks to the improbability of even having a fossil, let alone one of this age, that offers this much information,” Swanson said in the statement. He and his colleagues published their findings about the fossil Monday (Jan. 19) in the journal Papers in Palaeontology.

They dubbed the new species Aphelicophontes danjuddi; the species name commemorates fossil collector Dan Judd, “in honour of his gracious donation of the counterpart specimen to the Illinois Natural History Survey Paleontology Collection,” the researchers wrote. The insect’s genus comes from “aphelicus”, a Latin word for “old,” and “phontes,” which is Latin for “slayer” or “murderer,” the researchers reported.

The insect, which measured 0.5 inches (12.4 millimeters) in length, had an elongated and slender body and alternating light and dark bands on its legs. Female assassin bugs are usually bigger than males, so it’s likely that females of this species are bigger than this specimen, the scientists reported. Next to one of the legs is a small beetle that fossilized at the same time; while the assassin bug may have preyed on beetles, it’s unknown if this particular beetle was a victim of the bigger insect’s murderous attack, according to the study.

The pygophore, located at the bottom of the abdomen, is no more than 0.1 inch (3.1 mm) long. Unique characteristics in male genitalia evolve quickly, so they are often used to differentiate between closely related species of assassin bugs, the scientists reported.

This isn’t the oldest fossil evidence of genitals, however. That distinction belongs to a fossil from a type of arachnid called a harvestman (or daddy longlegs) that dates to around 400 million to 412 million years ago, during the Devonian period (416 million to 358 million years ago).

Two fossilized harvestmen, one male and one female, were discovered with their respective genitalia intact, at a site in what is now Scotland. In the fossils, paleontologists could see a penis in the male and an ovipositor, or egg-laying structure, in the female, researchers reported in 2003 in the journal Palaeontology.

“There are also numerous fossil insects in amber as old as the Cretaceous Period with genitalia preserved,” study co-author Sam Heads, a paleontologist with UIUC’s Illinois Natural History Survey, said in the statement. In one memorable example, a 41-million-year-old chunk of amber preserved not only the genitals of a pair of flies but also the moment when they were using their naughty bits, capturing the insects in the act of mating, Live Science previously reported.

However, high-quality preservation of intact insect genitalia in rock, as in the assassin bug fossil, “is almost unheard of,” Heads said.