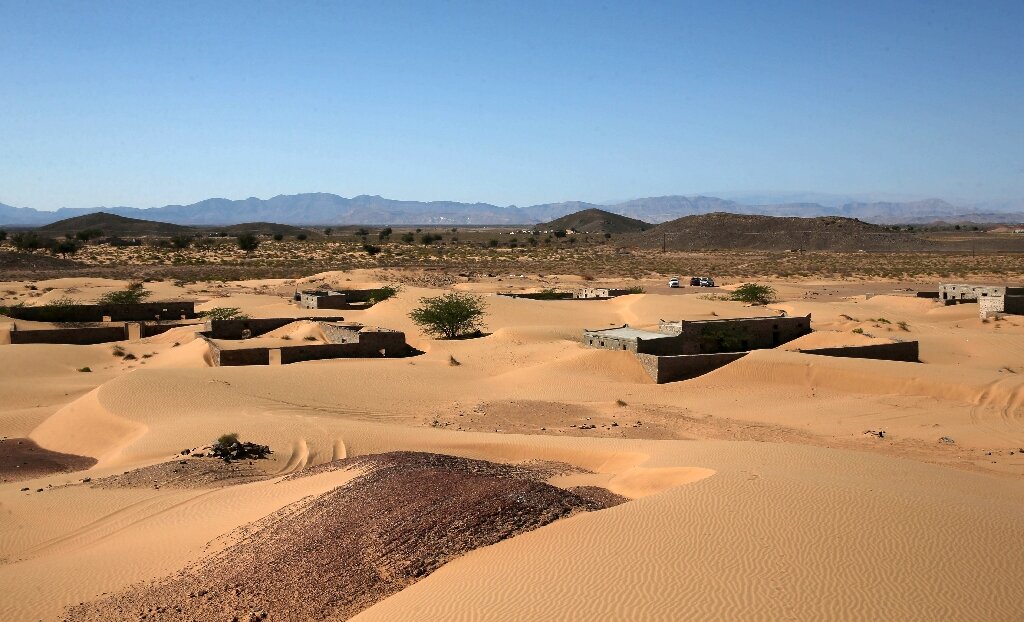 Encroaching sands have left little evidence that the Omani village of Wadi al-Murr ever existed, but former inhabitants and curious visitors are coming to rediscover the hamlet engulfed by the desert.

Salem al-Arimi, originally from the area, looked out nostalgically over the expanse.

According to local elders, “all the houses in the village were invaded by the sand that assailed them 30 years ago, forcing the inhabitants to leave their homes,” he said.

Building tops and sections of stone wall emerge here and there, bearing witness to those who once lived here.

Deserts are expanding all over the world, pushed on by climate change, and affected populations have few weapons to fight back.

Wadi al-Murr’s inhabitants, who mostly relied on pastoral activities, had to give up their village, swelling the ranks of those migrating to towns and cities.

Located at the bottom of a valley nearly 400 kilometres (250 miles) southwest of the capital Muscat, Wadi al-Murr is cut off from main roads and only reachable via a long, rough track.

Its isolation, including from the electricity and water grids, contributed to its slide into obscurity.

But that has not prevented erstwhile residents from returning to visit, along with trekking enthusiasts who take desert hikes in the region.

Mohammed al-Ghanbousi, a former inhabitant, said the moving dunes had re-exposed some dwellings after they were covered by sand.

This phenomenon has prompted “nostalgic people to visit the village, whose structures still stand because they are built from stone,” he said.

“The village has recently been included in trekking tours and also attracts photography enthusiasts,” he added.

A mosque that sits within the village, which in its heyday had about 30 houses and 150 inhabitants, is one building that has resurfaced.

Mohammed al-Alaoui said that when his mother learnt some homes had reappeared, she asked him to take her back.

“She often wants to go, and she likes to be there while she relates her memories of the old days, and sheds a few tears,” he said.

Rashed al-Ameri is among the Omani tourists who have come to discover the hamlet swallowed by the desert.

He travelled from Sur, hundreds of kilometres away, with two friends who were also keen to see Wadi al-Murr.

Oman, which is trying to diversify its oil-reliant economy, is seeking to develop its tourism industry—capitalising on its rich heritage, scenic coasts and stunning mountain geography.

The sultanate attracted three million foreign tourists in 2019, but like almost everywhere else, the novel coronavirus pandemic reduced visitors to a trickle in 2020.

Ameri is among those who believe Wadi al-Murr could easily be included on Oman’s tourist trail.

“What amazed me was that the force of nature could erase an entire village,” he said.

“And what’s more amazing is how this place, with its old walls, resists these assaults.”

‘India’s cleanest village’ clings on to its serenity