Opportunities and Challenges of Virtual Meetings 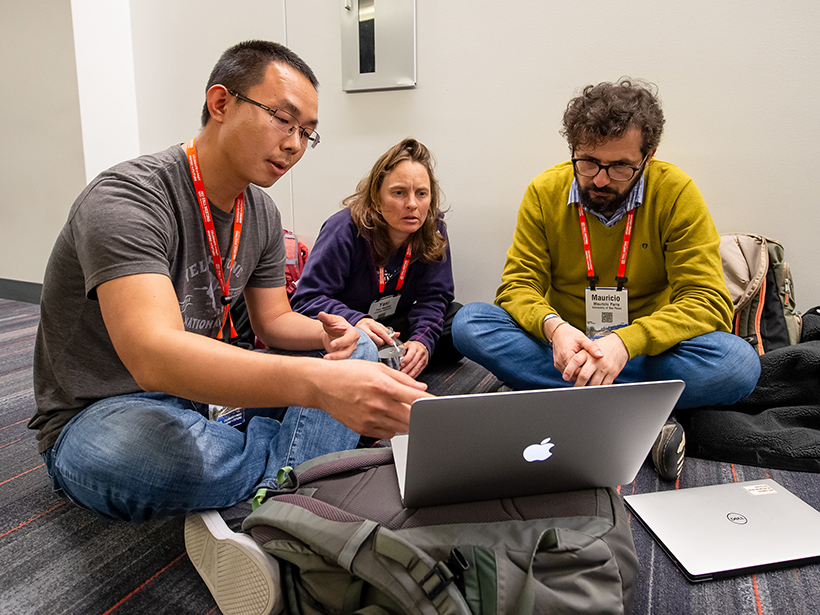 In recent months, science organizations around the globe have transformed in-person conferences into virtual meetings. That switch, driven by the COVID-19 pandemic, has brought with it both opportunities and challenges. Conference attendees and organizers are currently living out an experiment: How well can the virtues of in-person conferences—the ability to run into colleagues spontaneously, identify future research collaborators, and socialize with one’s peers—be replicated online? The outcomes are likely to change how scientists gather in the future.

Anecdotal and statistical data from virtual conferences are starting to roll in, and long-standing conversations about the environmental, financial, and accessibility impacts of traditional conferences are being revisited. AGU is just one organization developing new ways to connect and tailoring these lessons from other organizations to its unique community: AGU’s Fall Meeting, the largest international Earth and space sciences meeting, will be held virtually in December.

“Everyone Really Wanted to Make Something Happen”

This year has been a particularly difficult time to launch a new conference. Hannah Power, a coastal scientist at the University of Newcastle in Australia, and her colleagues had planned the inaugural Australian Young Coastal Scientists and Engineers Conference (AusYCSEC) for June 2020. But by the time abstracts were being solicited in the spring, it had become increasingly clear that an in-person conference would not be possible. The Local Organising Committee, which Power chaired, nonetheless remained dedicated to spearheading a conference in some form. “Everyone really wanted to make something happen, even if we couldn’t all be in the same place,” said Power.

Power and her colleagues decided to run a 3-day online conference, a shorter and more spread out version of the jam-packed conference they had originally planned. “We quite dramatically changed the program,” said Power. “We knew that 8 hours of Zoom in a day was just not going to work.”

The researchers spaced conference sessions at least a half hour apart, and there was an hour-long lunch break each day. The relaxed pace was intentional and reflected the reality that people attending the conference were likely still working and checking their email, said Power. “We were only taking up to 50% of the day at most.” Many other conferences have adopted similar models.

The Local Organising Committee decided to use Zoom webinar for most sessions. “We did lots of trial runs beforehand, we all knew the software, we all knew which different roles we had to play during the sessions,” said Power.

To replicate the in-person experience of networking, conference organizers offered an hour-long speed networking session on the second day of the conference. Participants joined a Zoom session and were assigned to different breakout rooms, each containing five or six people. Each person introduced themselves for a few minutes, and the format worked surprisingly well because everyone was in the same situation, said Power. “There was none of that awkwardness of walking up to someone you don’t know.”

Networking and professional development opportunities are particularly valuable for students and early-career scientists, but it takes extra work to replicate these experiences online, said Hadley McIntosh Marcek, an environmental scientist at the University of Maryland Center for Environmental Science and a 2018–2020 AGU Ocean Sciences section student representative. A real-time networking event like the one at AusYCSEC “requires that everyone is in the same time zone or all attending virtually at the same time,” said McIntosh Marcek. Asynchronous networking is also possible and can be facilitated with a meeting board or a Slack channel, she said.

Promoting networking also means combating the anonymity that virtual conferences can confer, said McIntosh Marcek. Even little steps help—for instance, making sure a speaker knows who is asking a question, she said. “That…engages the person who asked the question as well as the panelists. Even though they’re not in the same room, there’s at least some feeling of connection across the Internet.”

Soliciting audience participation can also engage students and early-career scientists, some of whom might feel shy at conferences, said McIntosh Marcek. Tools like Slido and Mentimeter can help presenters interact with their audiences, she said.

One advantage of online conferences is that students and early-career researchers might have more opportunities to rub (virtual) shoulders with established scientists. In the case of AusYCSEC, “we had a lot of senior researchers from our field attend parts of the conference,” said Power. Those scientists probably wouldn’t have traveled to an in-person conference, she said, but tuning in virtually to a session or two was easy.

AusYCSEC ended up attracting roughly 180 participants, including people from Brazil, Mexico, and the United States. That international representation probably wouldn’t have occurred if the conference had been held as planned in Newcastle in Australia, said Power. Other virtual gatherings have also reported upticks in international participants: At the American Physical Society’s annual meeting in April, 26% of attendees hailed from outside the United States. Last year, when the meeting was held in-person, only 6% of attendees were international, said Hunter Clemens, director of meetings at the American Physical Society.

Power and her colleagues agreed that subsequent incarnations of AusYCSEC will include at least some online components. The advantages are pronounced, said Power. “I can’t see us running an in-person conference where there’s no link to the outside world.”

Rebecca Fazzari, director of meetings and events at the Geological Society of America (GSA), describes her team’s rapid transition to online conferences as “calm chaos.” After canceling three of its section meetings scheduled for spring 2020, GSA held its first online section meeting in late May.

There was a lot to do in just about a month of planning, said Fazzari. “It was re-creating the whole meeting.” GSA staff opted to keep the conference’s dates and time zone unchanged, but the number of sessions was trimmed in half. Rather than have researchers present their results live and contend with potential Internet issues or barking dogs in the background, said Fazzari, all presentations were prerecorded. Researchers attended their session to answer questions.

Two GSA staff members oversaw each session and were prepared to troubleshoot problems. Fazzari helped out with one session in which the chair couldn’t get any of the presentations to play. Fazzari ended up running everything from her computer. “Sometimes we just had to quickly take over,” she said.

There are many advantages to online meetings, said Fazzari. For starters, there’s less of a financial burden on attendees because registration fees tend to be lower—GSA is charging about 50% less for its annual meeting this year, as is AGU—and there are no transportation or hotel costs. “All those elements now don’t exist,” said Fazzari.

Virtual gatherings also lend themselves to prerecorded presentations, which can increase accessibility. For example, they can be closed captioned for hard of hearing or deaf audiences. The upcoming GSA 2020 Connects Online meeting will feature closed captioning, said Fazzari.

Prerecorded presentations can also help streamline the conference experience if they’re made available in advance of a meeting. That’s what the European Geosciences Union did at its EGU2020: Sharing Geoscience Online conference in May. When attendees can watch presentations beforehand, they can home in on what they’re most interested in, said Fazzari. “People can get a sense of what sessions they really want to go to.”

There are pitfalls to online gatherings, too, said Fazzari. Data privacy issues such as unwanted sharing of presenters’ results are apt to crop up because participants can easily and unobtrusively capture screenshots of presentations. (Snapping a screenshot in the privacy of one’s own home is far less obvious than holding up a camera in a crowded conference hall.) Fazzari and her team are currently putting together guidelines about respectful online behavior in advance of the GSA 2020 Connects Online meeting.

“A Triple Win for Climate, Accessibility, and Costs”

The move to virtual conferences has been a long time coming, and it brings with it many positive benefits, said David Romps, a physicist at the University of California, Berkeley. It’s a “triple win for climate, accessibility, and costs.”

“Many scientists are unable to travel due to family obligations, disabilities, teaching commitments, or a lack of funds.”

Romps, like many other academics, used to fly a lot. “There I was, pumping a lot more carbon dioxide into the atmosphere than the average person,” he said. “I decided that really wasn’t the right thing to be doing.” Romps has since largely eliminated flying from his routine. He says that choice, along with his decision to eat a vegetarian diet and drive an electric car, jives with his thinking of himself as an Earth scientist. “We can’t be wrecking the climate in the process of trying to understand it.”

Flying represents a substantial portion of most academics’ carbon emissions, and it’s important that we support people who choose to limit their air travel, said Romps. “That means having virtual accessibility for conferences and meetings.”

Online gatherings also reduce other barriers to participation, he said. “Many scientists are unable to travel even in normal times due to family obligations, disabilities, teaching commitments, or a lack of funds.”

“In-person human contact is an essential part of being Homo sapiens.”

Romps is quick to point out that virtual accessibility doesn’t mean a complete lack of human contact, however. The lockdown we’re experiencing because of COVID-19 is not what I’ve been advocating for, said Romps. “In-person human contact is an essential part of being Homo sapiens.” But that contact can be achieved locally within one’s department or community rather than [by] flying halfway around the world to a conference, Romps maintained. “You can have that healthy aspect of your life without burning prodigious quantities of jet fuel.”

Boosting the efficacy of virtual gatherings ultimately will hinge on having better videoconferencing technologies, said Romps. In his opinion, most current videoconferencing platforms don’t come close to replicating the experience of attending a traditional conference. For instance, it’s often difficult to talk with just one person or a small group of people, he said. “The way the technology is set up now, everyone is in the same conversation.”

There are much better ways to interact virtually, and federal science agencies should prioritize investments in better virtual meeting technologies, Romps proposed. (He regularly uses Mozilla Hubs, a virtual collaboration platform, for his meetings with students and colleagues. “It works almost like a video game,” said Romps. “You get to walk around and see people.”)

“This Is Our Long Game”

This December, AGU’s Fall Meeting will bring together thousands of geoscientists from around the world. The conference will take place online from 1 to 17 December on a variety of platforms. The goal is to provide a virtual experience that allows for interactions and networking opportunities through, for example, one-on-one meetings, small group discussions, and feedback following poster presentations, said Randy Fiser, chief executive officer and executive director of AGU.

The decision to go ahead with a virtual Fall Meeting was made back in the spring, but planning was happening long before then, said Fiser. “We’ve thought about these things even before we went to an all-virtual meeting.”

“It’s new, it’s different—it’s not something we’ve ever done before.”

One of the benefits of moving to an online conference is the ability to really “walk the walk” of AGU being a global organization, said Lauren Parr, vice president of meetings at AGU. The Fall Meeting will be organized around blocks of time that are designed to be convenient for attendees in disparate locations, said Parr. Sessions held in the morning in North America are designed to be convenient for attendees in Europe. Likewise, evening sessions for North American audiences will stream during the following day for Asian attendees. “We looked at time slots across multiple time zones,” said Parr.

Virtual programming on the scale of the Fall Meeting—more than 27,000 people attended the conference in 2019—is an experiment, Fiser admitted. “It’s new, it’s different—it’s not something we’ve ever done before.”

It’s also an amazing opportunity, said Parr. Virtual programming, in some form, is here to stay, she said. “This is our long game. This is something we want to learn from.”